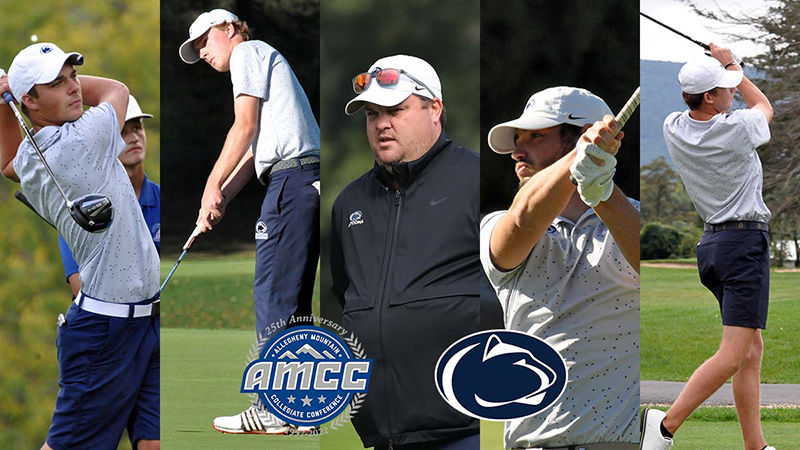 The Lions swept the AMCC’s major postseason awards, as junior Andrew Ferguson (Altoona, Pennsylvania/Tyrone) was voted the Golfer of the Year, freshman Iain Murphy-Herndon (Oldsmar, Florida/Saddlebrook Prep) was picked as the Newcomer of the Year, and head coach Tom Koehle was named the Coach of the Year.

Ferguson golfed in all 13 rounds for the Lions this season and finished second in the AMCC in scoring average (76.54). The junior shot 77 in each day of the AMCC Championships on Oct. 18-19 to win the conference’s individual title, ranking first out of 40 golfers at the conclusion of the two-day tournament. Ferguson’s season was also highlighted by his score of 68 during day two of Wooster College’s Gatorade Collegiate on Sept. 5, a score that ranks as the second-lowest in a single round in Penn State Altoona golf history. Ferguson was also named the AMCC Golfer of the Week on Sept. 7.

Last season, Ferguson was voted as the AMCC’s Co-Player of the Year and also took first team All-AMCC honors. This is the first time in his collegiate career that he earns the full share of the conference’s top individual postseason award, and it is the second time that he has been a first team All-AMCC pick.

Murphy-Herndon competed in 11 rounds this fall during his first season of collegiate golf. The freshman compiled a scoring average of 79.18 to rank fifth in the AMCC individually. His two-day score of 168 put him in a tie for fifth place on the player leaderboard at the AMCC Championships, and his score of 70 during day two of the Mountain Valley Collegiate Classic on Sept. 18 is tied for the third-lowest score in program history and also ties for the lowest score in a round by a Penn State Altoona freshman golfer.

Koehle, in his 16th season at the helm of the Penn State Altoona golf program, received the AMCC’s Coach of the Year award for the second consecutive year and third time overall. Koehle guided the Lions to their sixth-ever AMCC title, the program’s first since the 2010 season. The championship win also propels the team to its fifth NCAA Division III Tournament appearance, as the Lions will compete in the Division III Men’s Golf Championship on May 10-13 at Mission Inn Resort and Club at Howey-in-the-Hills, Florida.

Heffelfinger takes first team All-AMCC status for the second year in a row, following his freshman season of 2020 that saw him earn conference Newcomer of the Year honors. The sophomore golfed in all 13 rounds for Penn State Altoona this fall and led his team and the AMCC in scoring average (75.00). His two-day score of 160 during the AMCC Championships placed him in third individually at the event, and his score of 67 in the Lions’ dual meet win over Juniata College on Sept. 24 set a new Penn State Altoona golf program record for the lowest score in a round. Heffelfinger also earned a conference-leading three AMCC Golfer of the Week awards this past season.

Divald competed in all 13 rounds for the Lions in his freshman campaign. His season average of 79.08 ranks fourth-best in the AMCC, and his two-day combined score of 168 in the AMCC Championships tied him for fifth place individually in the tournament. Divald’s lowest scores of the season came in day one of the Gatorade Collegiate on Sept. 4 and day two of the Mountain Valley Collegiate Classic on Sept. 24, when he shot 73 in each of those rounds to tie for the sixth-lowest scores in a single round in Lions history.