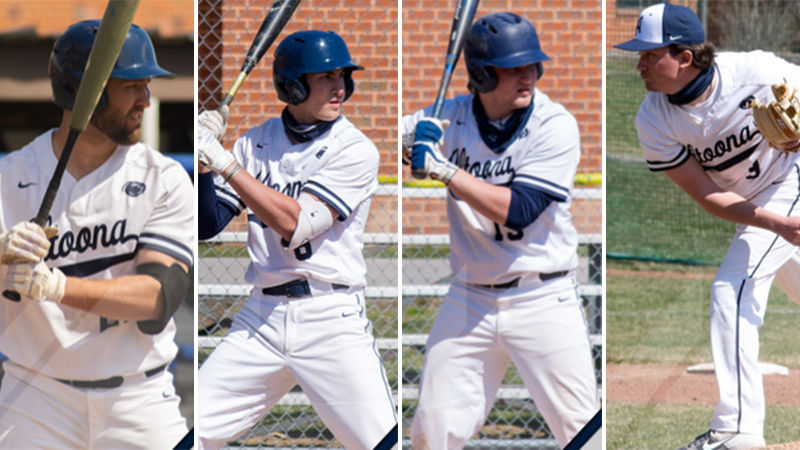 This is Cumming’s first career AMCC Player of the Year recognition, as well as the first time that he has been voted first team All-Conference. He was previously a second team pick in 2018 and a third team selection in 2019.

Hillard tied a pair of Penn State Altoona baseball single game records this season, collecting five hits in a game against Wilson College on April 8 and hitting three doubles in a game against Medaille on April 3. This spring, he received the AMCC Player of the Week award on May 3 and was named the NCBWA Division III National Rookie of the Week on May 5.

Ennis was recognized for his play during the AMCC postseason tournament when he was named to the conference’s All-Tournament team. His second team selection represents his first career appearance on an AMCC All-Conference team.

Glass had a strong and consistent season on the mound as a freshman with Penn State Altoona, being one of the Lions’ conference starters and also leading the team in total appearances. In the AMCC this spring, the right-hander ranked third in wins (6) and shutouts (1), fourth in earned run average (2.93) and complete games (3), eighth in appearances (10) and innings pitched (43.0), 17th in games started (5), 20th in strikeouts per game (4.81), 22nd in total strikeouts (23), and 29th in opponent batting average (.263).

Penn State Altoona baseball finished its 2021 season with a 12-15 overall record, including going 9-7 in the AMCC to take fifth place in the conference’s regular season standings. The Lions earned a berth into the conference tournament, where the team lost in the quarterfinal round in a best-of-three series with Alfred State College.