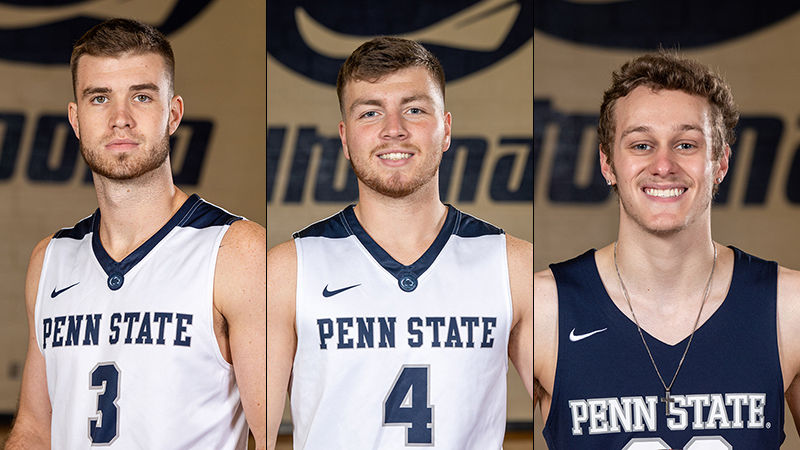 KANSAS CITY, Mo. — The National Association of Basketball Coaches (NABC) released its individual and team academic awards on July 15, including the recognition of three Penn State Altoona men’s basketball players and the team as a whole for their success in the classroom during the 2019-20 season.

The NABC announced its 2019-20 Honors Court, an annual recognition of the talents and gifts that collegiate men’s basketball student-athletes possess on the court and the hard work they exhibit in the classroom. Named to this year’s Honors Court were Penn State Altoona’s Austin Krise (Allport, Pennsylvania/West Branch), Trey Butterworth (Clarence, Pennsylvania/Bald Eagle), and Nate Gillen (Johnstown, Pennsylvania/Central Cambria). Krise and Butterworth — who were both also named to the Honors Court last season — each completed their senior seasons this past year, while Gillen will be a senior this upcoming academic year.

“So proud of these three individuals who were named to the NABC Honors Court. Trey and Aus have now been two-time members, and it shows what type of young men they are,” said Penn State Altoona men’s basketball Head Coach David McGreal. “They have been great players and leaders for us on and off the court, and I am sure that Nate will follow in their footsteps and continue his success in the gym and in the classroom. These three are the true definition of student-athletes.”

In order to be named to the Honors Court, a student-athlete must meet a high standard of academic criteria set by the NABC. The qualifications are that a student-athlete must be a varsity men’s basketball player in his junior or senior academic year, hold a cumulative grade point average of 3.2 or higher at the conclusion of the 2019-20 academic year, have matriculated at least one year at his current institution, and be a member of an NCAA Division I, II, III, or NAIA Division I or II institution with an NABC member coach.

In addition to releasing its individual academic awards, the NABC also announced its 2019-20 Team Academic Excellence Awards. These awards recognize outstanding achievement by a collegiate men’s basketball team with a cumulative GPA of 3.0 or better for the 2019-20 season.

For the first time, the Penn State Altoona men’s basketball team earned the NABC’s Team Academic Excellence Award by compiling a team GPA of 3.009. This is the second time this year that the Lions have been recognized for their academics, as the team was also awarded the Allegheny Mountain Collegiate Conference’s Peak Performer award in April for having the highest GPA among the league’s men’s basketball teams.

“As a coach, you strive to not only make a difference on the court, but also off of it, and one of my goals when I took over this program four years ago was to get our team GPA to a 3.0. Getting that accomplished this season has been one of my prouder moments as a coach,” McGreal stated. “It was a great season for us athletically, but garnering the AMCC Peak Performer award and now earning the national accolades from the NABC have definitely put this team in the history books, being the first men’s basketball team here to earn these prestigious awards.”

About the National Association of Basketball Coaches

Located in Kansas City, Missouri, the NABC was founded in 1927 by Phog Allen, the legendary basketball coach at the University of Kansas. Allen, a student of James Naismith, the inventor of basketball, organized coaches into this collective group to serve as "Guardians of the Game." The NABC currently has nearly 5,000 members consisting primarily of university and college men’s basketball coaches. All members of the NABC are expected to uphold the core values of being a Guardian of the Game by bringing attention to the positive aspects of the sport of basketball and the role coaches play in the academic and athletic lives of today’s student-athletes. The four core values of being a Guardian of the Game are advocacy, leadership, service and education.