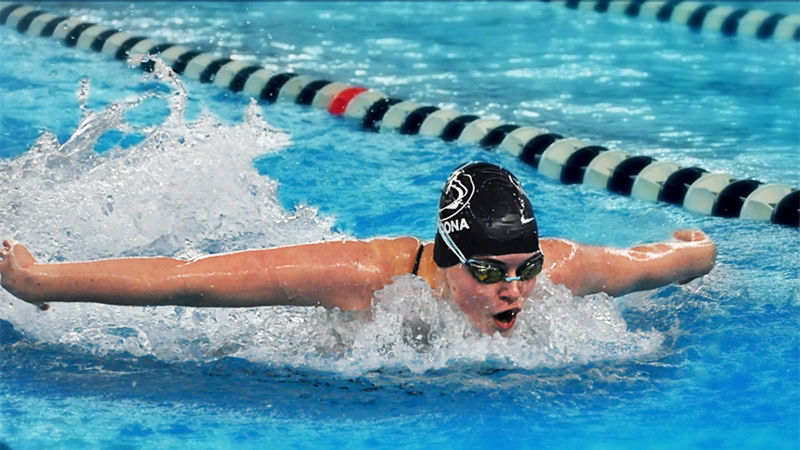 AMCC All-Conference status in swimming is determined by finishes and results during the four-day conference championships, which occurred last Wednesday through Saturday.

Leading the way for the Lady Lions on the All-AMCC squad was freshman Grace Dangelo (State College, Pennsylvania/State College), who was named the conference’s Women’s Swimmer of the Year and Women’s Newcomer of the Year by virtue of being the top point-getter of any women’s swimmer during last week’s league championships.

During the 2019-20 season, Dangelo etched her name in the Penn State Altoona women’s swimming record books a total of eight times, with six of those representing new records in individual events and two being relay team events. The freshman also took AMCC Women’s Swimmer of the Week honors a league-high eight times.

In addition to picking up the Women’s Swimmer and Newcomer of the Year awards, Dangelo also earned first-team All-Conference status for her wins in the 200 Yard I.M., 400 Yard I.M., and 200 Yard Butterfly.

Heisey also took second-team All-AMCC status in the 100 Yard Butterfly, placing second in that event with a time of 1:04.53.

In the 200 Yard Freestyle Relay, Heisey, Dangelo, Gillian Lowe (York, Pennsylvania/Dallastown), and Kaitlin Heil (Pittsburgh, Pennsylvania/CAPA) took first-team All-AMCC by winning that event during the championships with a combined time of 1:43.48. That same foursome also earned first-team All-Conference recognition in the 400 Yard Freestyle Relay, placing first with a time of 3:49.06.

Both of those relay times established new records for the Lady Lions swimming program.