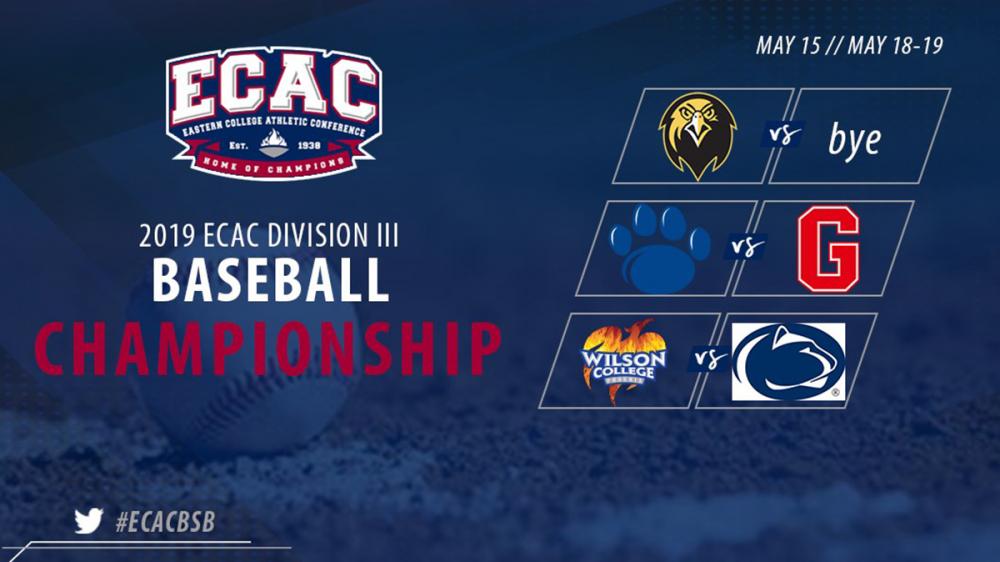 DANBURY, Conn. – After suffering a loss in Saturday’s Allegheny Mountain Collegiate Conference championship game, the Penn State Altoona baseball team was given an opportunity to extend its season on Monday, when the Lions picked up a bid to compete in the Eastern College Athletic Conference’s Division III Championship Tournament.

In a field of five teams, Penn State Altoona was tabbed as the tournament’s fifth seed. The Lions will play No. 4 seed Wilson College in Chambersburg, Pa. this Wednesday, May 15 in a first round game. First pitch for that game has been set for 3:00 p.m.

The winner of Wednesday’s game will advance to play No. 1 seed Pfeiffer University on Saturday, May 18 at 12:00 p.m. in the semifinals, hosted at No. 2 seed Penn State Behrend. That game’s winner moves on to the tournament championship game on Sunday, May 19 at 1:00 p.m., also hosted at Behrend.

Penn State Altoona baseball holds a 28-16 overall record, including going 12-6 in the AMCC. After a third place finish in the conference’s regular season standings, the Lions made a deep run into the AMCC Tournament, placing as the AMCC runners-up after a loss to La Roche University in Saturday’s conference title game.

This marks the Lions’ third-ever berth into an ECAC postseason tournament. The program’s previous two appearances came in back-to-back seasons, when the Lions were named to the ECAC Division III South Region Tournament in 2009 and 2010. The ECAC has since shifted away from regional tournaments to a single, national format.

In its other ECAC tournament appearance, Penn State Altoona suffered a tight 7-6 loss to Bethany College in 2010.

The Lions’ quest for another ECAC title starts with a matchup at Wilson on Wednesday. The Phoenix are 20-12 overall, including a 9-6 record in the Colonial States Athletic Conference. Wilson finished in third place in the CSAC’s regular season standings, and it was eliminated from the CSAC playoffs after a 6-4 loss to Cairn University last Wednesday.

This Wednesday’s game between Penn State Altoona and Wilson will be the teams’ second meeting this season. The Lions fell 11-5 at Wilson on April 18, as the Phoenix jumped out to a 4-1 lead after the game’s first four innings, then cemented their victory with a six-run eighth inning.