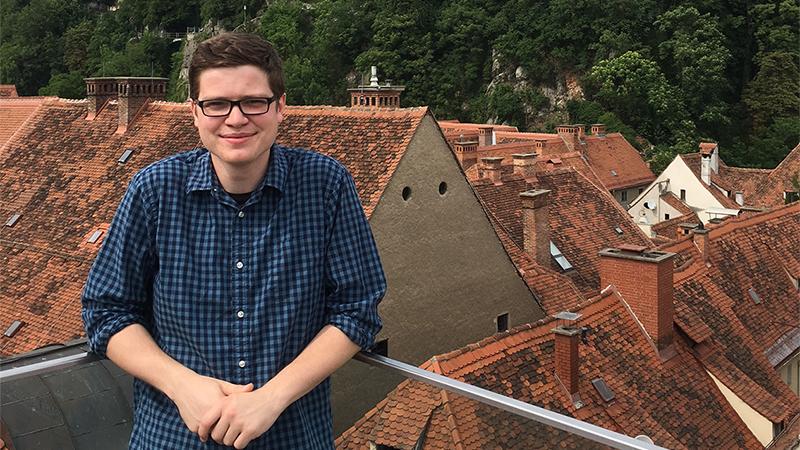 Through the study of a second language, Matt Adams discovered a new passion and took a life-changing trip to Austria.
By: Marissa Carney

It’s not uncommon for many students starting their college careers to dismiss a second language as superfluous to their main area of study. They took a language in high school, wasn’t that enough? And besides, don’t most people across the globe speak English?

That may be true to an extent, however, a 2014 Coalition for International Education study reported that: “30% of U.S. business executives [interviewed said] they missed opportunities abroad due to a lack of on-staff language skills, and nearly 40% reported that they had failed to reach their international potential due to language barriers.”

To succeed and thrive in today’s interconnected world, no matter what career, American students should possess cultural awareness and global expertise. That includes language, beyond what they may have learned in high school and subsequently forgotten.

Professors across Penn State Altoona, from language and humanities to engineering, know students place limits on themselves when they ignore the impact a foreign language can have. Matt Adams very nearly was one of those students. At one point early in his freshman year, Adams, who graduated with a dual degree in security and risk analysis and letters, arts, and sciences this past May, considered signing a petition against the language requirement in the major. “At the time, I was thinking, ‘I have to know all these computer languages and all of this technical stuff, no one's ever going to care if I can speak Spanish or French.’”

But deciding not to sign the petition and to fulfill the language requirement was one of the best decisions Adams could have made, for it played a critical role in a life-changing trip to Austria.

Adams decided to take German simply because that is his family’s heritage. “I wasn't terrific at the class, but I enjoyed it, and I think I took it more seriously when I started to get decent at it.” He took three German courses, two with Jutta Gsoels-Lorensen, associate professor of German, English, and comparative literature. He also took a 400-level English course with her and a German film course.

It was in that English class that a unique opportunity presented itself combining research, writing, and language.

In the course students focused on refugee studies. Adams says he became quite interested in the topic and chose to write about the ways refugees use computers and smartphones and how that usage is changing the experience of being a refugee now compared to 10 years ago. From that, Adams and Gsoels-Lorensen developed a study in which he would interview a group of refugees from Afghanistan, Iran, Pakistan, and Syria currently seeking asylum in Austria. Adams was able to travel to Austria to meet with and interview the refugees. 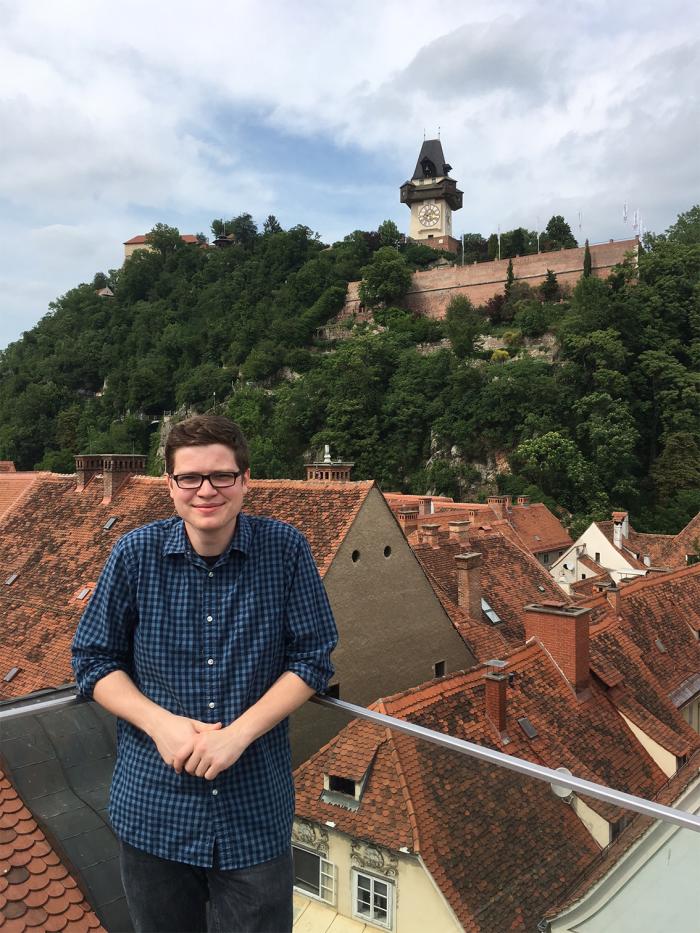 Matt Adams poses for a photo in Austria. While there, he interviewed a group of refugees from Afghanistan, Iran, Pakistan, and Syria currently seeking asylum in Austria.

When he arrived, the refugees were in the process of learning German to create new, comfortable lives in Austria. Adams did ask his questions in English which were translated into the native languages of the refugees and their answers back into English, but it was the German that allowed everyone to connect with each other, especially in a social context. “I didn’t speak a word of Farsi, Dari, or Arabic, and their English was limited, but we were able to communicate in German. If I didn't have the language background, I wouldn't have gotten nearly as much out of the experience as I did.”

The common language allowed Adams and the refugees to spend time together outside of the interviews drinking coffee and playing soccer. “They probably regretted asking me to be on their team,” he jokes, “but being able to kick back with them was just incredible.”

“English got Matt part of the way, but not all of it,” says Gsoels-Lorensen. “He needed German to get around the town and to function in the many informal situations, beyond the interview room, that allowed him to live an Austrian life on the ground. His experience would have been impoverished had he not been able to speak the language.”

Adams says taking German and taking part in the interview project could give him an advantage when it comes to applying for jobs, but more than that, learning German at Penn State Altoona helped unlock a part of the world he wouldn’t have been able to experience otherwise. “Had I not opened myself up to learning German, sure, I'd be really good at C++, but I would've never had Dr. Lorensen for class, and I wouldn’t have had the opportunity to travel to Austria. I would have missed an incredible experience that totally changed my perspective on the world and my career. ”

So much so, that Adams committed to a full-time position with AmeriCorps, a voluntary civil society program that engages adults in public service works. In August, he began working at a food pantry in Kentucky, saying it was one of the options available to him, and it just felt right. He’s also planning to attend graduate school for sociology and wants to combine his studies there with computer security and refugee studies. “The larger idea of security is pretty prominent in a lot of writing on refugee studies. And what I learned about computer security at Penn State ties in really well with the work I've done on refugee usage of technology. There is also the aspect of how surveillance tools are used by governments and aid organizations for all kinds of good and bad purposes.”

Gsoels-Lorensen herself is a native of Austria and loves to see students transformed through language. “I think students labor under the assumption that they do not have to learn another language, because they can get by with English. That’s only true to a certain extent. If you find yourself in another country, you’re really cut off from the context you’re living in if you don’t speak the native language. It’s such a profound experience to learn another language: it is really the door to other cultures and other people’s souls.”

Further, Gsoels-Lorensen says it’s important for students to understand how pairing their main area of study, no matter what that might be, with a foreign language could lead to job opportunities, and enhance their job experiences. “We live in a connected world. Students sometimes think that they will remain in their familiar environment for their career, but even if that is the case, their future coworkers will likely be a diverse group from all over the globe, or they might be collaborating with fellow employees far away. Being sensitive to other cultures and languages, and understanding how language really shapes the way we think and approach the world, is key.”

Anja Wagner also knows how a second language can open doors. The part-time lecturer in German has seen many students treat a foreign language as drudgery and something they could not possibly ever use in the future. But she has a fantastic example she shares with them to help change their minds.

Wagner recently tutored a student through the German and Slavic department at University Park. The student, who transferred from Florida University, was upset about having to complete a language requirement for her major at Penn State when she hadn’t had to at Florida. So she undertook the study of German rather reluctantly.  Imagine her wonder when she went on to sign a pro contract with Austrian first division volleyball team SG Kelag Klagenfurt.

“It's her passion to play volleyball, and if she hadn't taken those language courses, who knows if she would have even felt comfortable just moving over there,” says Wagner. “That's a really good example to give to students here who are coming in and struggling. It gets them thinking about what’s possible during college and beyond.”

Wagner touts Penn State Altoona’s minor in global language and culture, which is flexible and can be individualized. “I think it is a great program for students to incorporate what they are passionate about into their studies. Instead of separating things like, ‘this is the language that I'm taking. This is my major. This is maybe another supporting course I'm taking,’ tying it all together just makes a whole lot more sense.”

Adams says he thinks constantly of his trip, the refugees and their stories, and the time they spent together. He also thinks of how he’s grown from the experience. “Three years ago, I would have never taken time out of my day to figure out how refugees use computers. At that time, I would have thought, ‘that's not what I'm doing here.’ Dr. Lorensen’s English class shifted my perspective. Going to Austria shifted it even further. Taking the language courses changed the way I think of computers, the technical field, and the world.”

Adams encourages students to keep an open mind about language requirements or consider taking a second language even if they don’t have to. “I would say to embrace other languages you're not familiar with or comfortable diving into. Maybe you’ll hate it, maybe you won't use it, but maybe it will be incredibly meaningful, and you'll use it in ways you never imagined.” 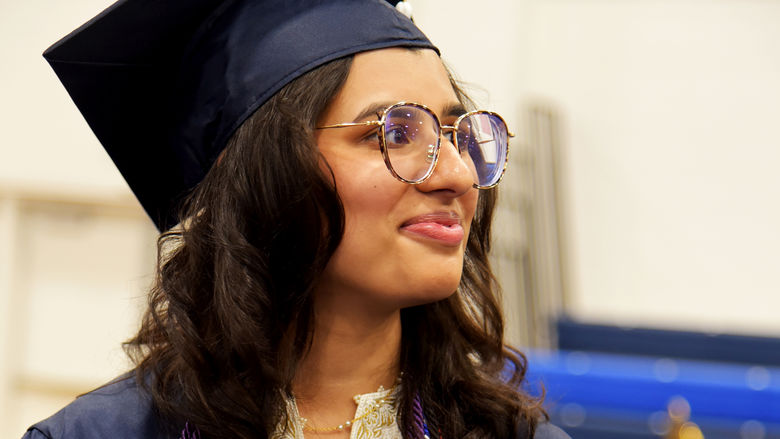 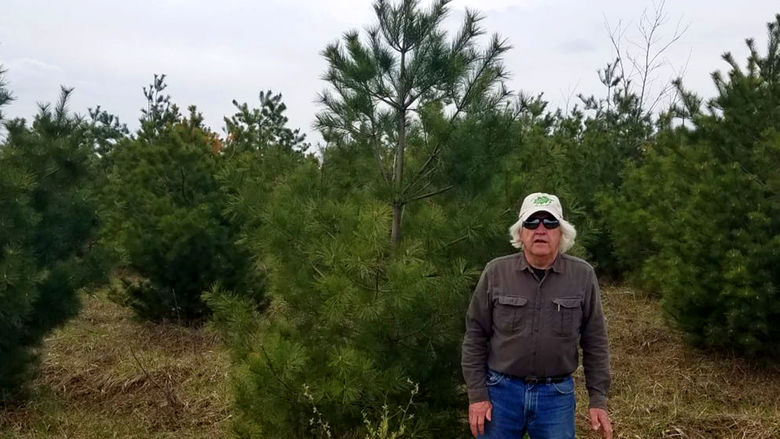 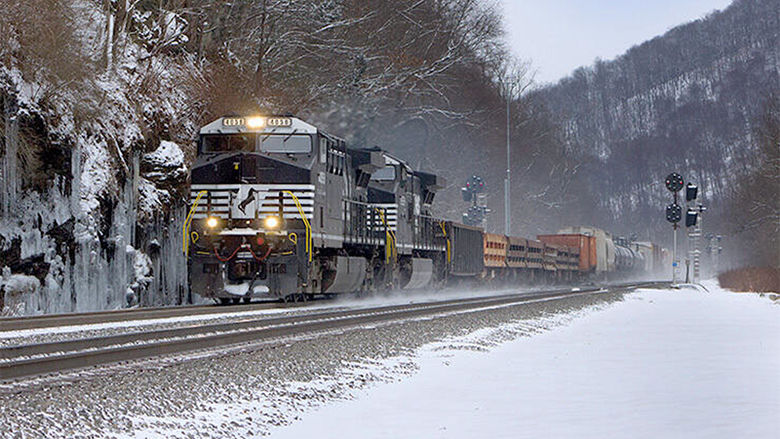