Home Is Where the Heart Is

Gabrielle Davidson reflects on her undergraduate career at Penn State Altoona and why it will always be home to her.
By: Marissa Carney

“When I took a tour of Penn State Altoona, I fell in love. I told my parents, ‘my heart is here.’ I didn’t even want to look at other colleges afterward.”

And so, Gabrielle Davidson applied to Penn State Altoona. She liked the small community and family feel, and she liked the idea of small classes where she would feel like a person, not a number.

Davidson started as a nursing major, then decided to pursue Human Development and Family Studies (HDFS). “Within those first few classes of HDFS, I knew it was what I was meant to do for the rest of my life.” Davidson was fascinated by the courses that explained life milestones, lifespan theories, and why people act the way they do. “I found it interesting, but the counseling aspect was what I was drawn to. In my heart, I knew I wanted to be a counselor.”

Davidson gives a lot of credit to her HDFS professors for supporting her in achieving that goal. “My professors helped me grow as a person. They took time to understand who I am as an individual, and they guided me toward figuring out what my passions and strengths are. Then they helped me build on those, while also developing my weak areas.”

They also pushed her to stretch beyond her comfort zone. For one class project, Davidson completed an autoethnography, a research method that uses personal experience to describe and interpret cultural texts, beliefs, and practices. Using her own sexual assault, Davidson’s autoethnography included a paper, poetry, and video component.

Her professor, Dr. Kelly Munly, suggested she present her project at a conference about research methods. Davidson was hesitant, but with the confidence instilled in her by Munly, she agreed, and, in May 2018, they traveled to the University of Illinois, Urbana-Champaign for the Congress of Qualitative Inquiry Conference. “Being in front of strangers to tell a very personal story was very intimidating, but Dr. Munly helped me to feel supported. She lit the fire in my belly that told me ‘Gabrielle, you were meant to make a difference and share this part of your life.’” Over about five days, Davidson was able to attend several presentations and meet with professionals who shared similar interests. “It was a great chance to network and meet some true leaders in research. Overall, this conference gave me confidence. It was exhilarating to see my name printed in a book along with big names in research.”

As a Penn State Altoona student, Davidson also had the opportunity to write a 15-page grant application with professors Heidi Manfred and Lauren Jacobson about student-athletes and their motivation. Although the team didn’t receive the grant, Davidson was thrilled with the experience. “The grant writing process taught me about productive communication. Working as a team became the number one priority. Overall, it was exciting to think that my professors saw my dedication to my education and wanted me to be a part of their team.” 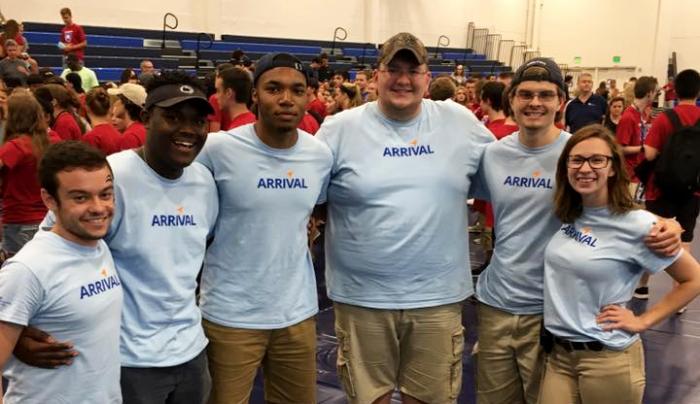 Out of the classroom, Davidson put most of her energy into being a resident assistant on campus. Over three years, she was an RA in Maple Hall, Oak Hall, Spruce Hall, and Cedar Hall. During that time, she worked to build a strong community for other students that included diversity, care, and safety. She says the experience helped her become an advocate, not just in the residence halls, but everywhere she went. “You don’t realize how much ugly is in the world until you start to learn about the hatred that other people have witnessed. I came from a small town that was far from diverse, so being an RA helped expose me to new ideas and concepts. My residents looked to me to be a leader, and I took that seriously, making sure I worked to build my knowledge. I learned so much about culture when I was an RA. I saw the clothing, ate the food, enjoyed the music, but even more importantly, I learned what makes every single one of us unique and special.”

Davidson belonged to the Resident Hall Association and was in the National Resident’s Hall Honorary, an organization that recognizes individuals who have contributed to the advancement of college and university housing. She was also a member of Kappa Omicron Nu, an honor society for human development and family studies. In her senior year, she became president of the Altoona chapter. “I wasn’t expecting that. I never thought I would be in my major’s honor society, let alone its president. I was over the moon because it was such an honor.”

Davidson poses with a cluster of balloons at a Stand for State bystander intervention event.

Davidson says she pushes herself to succeed not only because she likes to keep busy, but also being involved gives her a well-rounded life experience. “That helps me relate to other people, to understand them and their situations. That’s going to help me in my counseling career.”

Davidson graduated in May 2019 and is about to begin the Clinical and Mental Health Counseling master’s program at the Johns Hopkins University School of Education. This degree will prepare Davidson to obtain her license in counseling. The program will take about two years and include an internship in Baltimore.

“Looking back on my undergraduate career makes me super emotional. I have such great memories. Even when I fell down, there were so many people to pick me up. I get emotional because I had that community when I was at Penn State Altoona. I don’t know how you leave something like that behind without getting choked up.”

Davidson is excited for incoming first-year students as well as those who are returning to Penn State Altoona for this academic year. She encourages each of them to put themselves out there, to get involved. “I did things I never thought I’d be able to, I met people I probably never would have if I didn’t open myself to opportunities around campus. Go to the club meetings. Go to the study sessions with your classmates. Stop in and say hello to your professors during their office hours. College will take up what feels like all of your time, but it’s over in the blink of an eye. I want you to feel what it is like to truly be a Nittany Lion. I want you to be at Penn State Altoona and say, ‘I’m home.’”

Davidson is so pleased with her experience at Penn State Altoona that she touts its benefits to everyone she can, especially those considering colleges. “I tell them about the small, accepting community here and how much support they will get from other students and faculty and staff. I tell them about the confidence it gave me, and all of the doors it opened for me.” 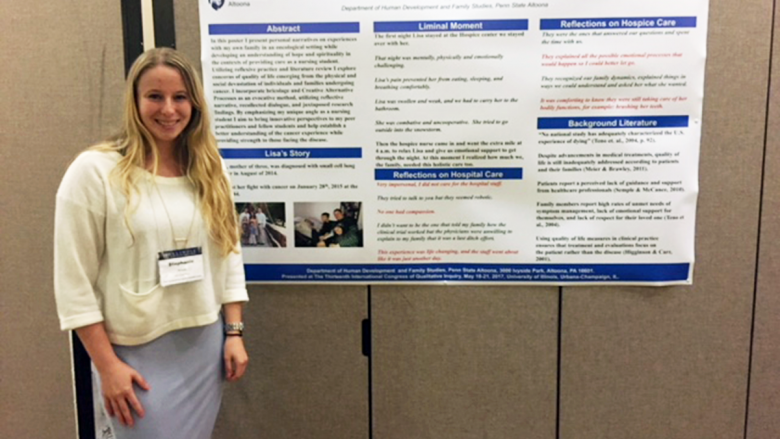