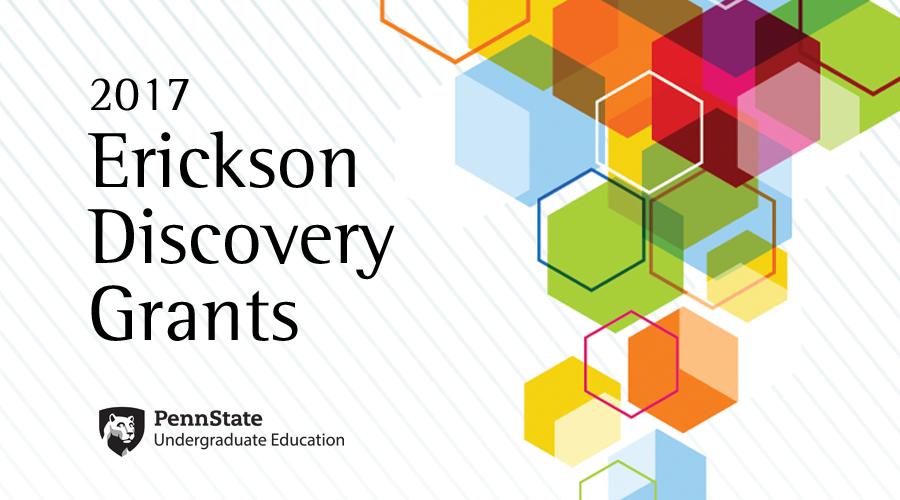 Students will use funds to immerse themselves in research
Carolyn Gette
May 4, 2017

UNIVERSITY PARK, Pa. — At Penn State, an increasing amount of students are forgoing their usual summer routines and participating in research in the field, lab, or studio. For some, this means staying close to campus while others travel thousands of miles away to research topics in the sciences, engineering, social sciences, humanities and arts fields.

Among the 219 students who applied, 83 from across Penn State’s campuses will each be awarded a $3,500 Erickson Discovery Grant for summer 2017 through the Office of Undergraduate Education. This is a record number of both applicants and awardees. The students will use the funds to immerse themselves in original research, scholarship, and creative work under the direct supervision of a faculty member.

“The Erickson Discovery Grant program allows students to fully engage with a research question over the summer and direct their own hands-on discovery process in a subject that interests them,” said Alan Rieck, assistant vice president and assistant dean for Undergraduate Education, who administers the program. “This type of inquiry is extremely beneficial to students, allowing them to develop critical-thinking skills, explore career choices, and be a part of the process of discovery."

Rieck also noted that the grant provides a tremendous service by removing the financial barrier that would keep many students from pursuing original research. “Students will use the grants for project costs including supplies, materials, books, specialized software, travel for the purpose of data collection, and living expenses,” said Rieck.

Rieck looks forward to the beginning of fall semester when he will begin to hear from students on the progress they made over the summer. “Some may not have found complete answers to questions they formulated, but all will have gained experience and insights that will better prepare them for classroom and career success,” he said.

The 2017 Erickson Discovery Grant recipients are:

— Josef Blaszkiewicz, Eberly College of Science, "Investigation of the Metabolic Role of an NAD+ Biosynthesis Pathway in the Embryonic Development of Multicellular Organisms"

— Abigail Cosgrove, College of the Liberal Arts, "Do Monolingual Children in Central Pennsylvania Show Similar or Different Patterns of Foreign-accented Speech Comprehension as Adult Monolinguals Living in This Area?"

— Cadie Dunlap, Penn State Berks, "Effects of Ethanol and its Response on MCF-7 Cells in Relation to Estrogenic Effects"

— Isabel Hunsberger, Eberly College of Science, "The Search for Resistant Mutants of KKL-896 in Bacteria"

— David Kauffman, College of Engineering, "Investigation of Polymer Microneedles in the Treatment of Autoimmune Disease"

— Mark Klemencic, College of the Liberal Arts and Eberly College of Science, "Dig a Little Deeper: Primary Literature as a Potential Enhancer of Undergraduate Psychology Education"

— Rachel Lamb, Eberly College of Science, "The Effects of Competition on Defense of an Invasive Thistle Species"

— Jeremy Myslowski, College of Engineering, "Micro-Particle Image Velocimetry for Quantifying the Flow and Cellular Interactions Between Blood and Nanoparticle-Programmed Biomaterials"

— Alexandra Nader, Eberly College of Science, "Role of Selenium in the Enzymatic Pathways and Phagocytic Functions of Inflamed Macrophages"

— Andrew Oneglia, College of Health and Human Development, "The Impact of Estrogen vs Energy Status on Bone Balance and Bone Turnover Rate in Young Exercising Women"

— Gregory Reilly, Eberly College of Science, "Examination of Protein-Protein Interaction of GRASP and its Impact on Cell Motility"

— Elizabeth Roach, College of Engineering, "Using a Point of Care Biosensors to Determine the Pathogen Responsible for respective UTIs"

— Amelia Rogus, College of Agricultural Sciences, "NR5A2 to the Rescue? Examining the Roles and Regulation of NR5A2 in Corpus Luteum Rescue"

— Gina Sarkawi, College of Earth and Mineral Sciences, "Effectiveness of a Handheld X-ray Fluorescence Analyzer on Tephra from Afar, Ethiopia"

— Kyle Sherbine, College of Earth and Mineral Sciences, "Microbial Metabolism and Composition of Proglacial Stream Supported by the Auseangate Glacier in the Peruvian Andes"

— William Su, College of Engineering, "Development of a New Class of Citrate-based Biomaterials and its 3D Printing Application in Tissue Engineering"

— Mi Tzou, College of the Liberal Arts, "Fighting Against Dictatorship: Taiwanese International Students in the U.S. (1980)"

— Aliza Winneg, College of the Liberal Arts, "Using Bilingualism as a Tool to Study Recognition Memory for Grammar and Meaning"