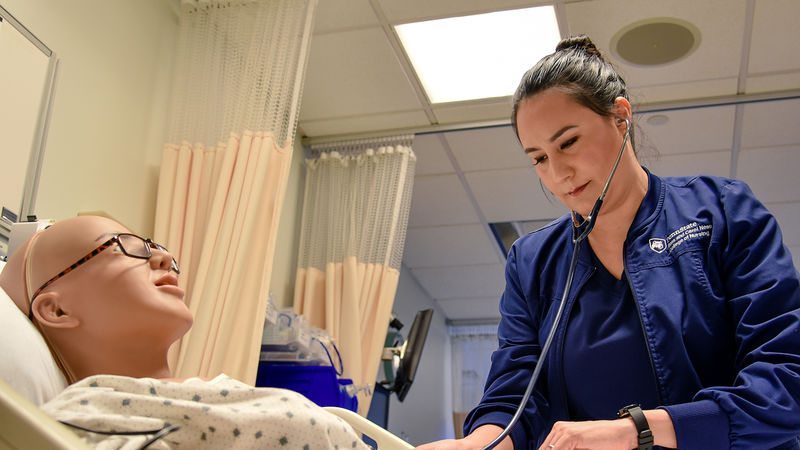 It may not be the journey Paola Jaramillo Calderon imagined she’d take, but she’s putting trust in herself and destiny to get her where she is meant to be.
By: Marissa Carney

Paola Jaramillo Calderon doesn’t necessarily believe in fate. But she doesn’t quite discount it, either—after all, it appears to have played a part in a few critical points in her life over the last few years.

To know how she wound up in the Second Degree Nursing program at Penn State Altoona, we have to travel back in time and across the border.

Born and raised in Mexico, Jaramillo Calderon is the oldest of three children, and as they grew up, she was often in charge of caring for them. She says she was always pulled toward science and biology, and in high school, when she attended a career shadow day at the Red Cross, she was fascinated by the doctors and emergency technicians. Also, as a teen, she once witnessed the birth of a child. “It was so touching to see something so beautiful. All those little things added up and really drew me to medicine. It’s an amazing field, and I wanted to be a part of it.”

Jaramillo Calderon graduated high school in 2000 and entered medical school. After four years, she was required to do an internship for a year, followed by a year of social service work to earn the title of general physician. After another year of study, she began a residency program to become an anesthesiologist.

“While I was an intern, my favorite rotation was the operating room. At one point, I thought about becoming a surgeon, but that meant I would be doing just one thing. As an anesthesiologist, I get to work with surgeons, with OBGYNs, ophthalmologists, all different specialists. I can also be in the ICU and the ER, just about anywhere. For me, it’s the most interesting, rewarding, and challenging career.” 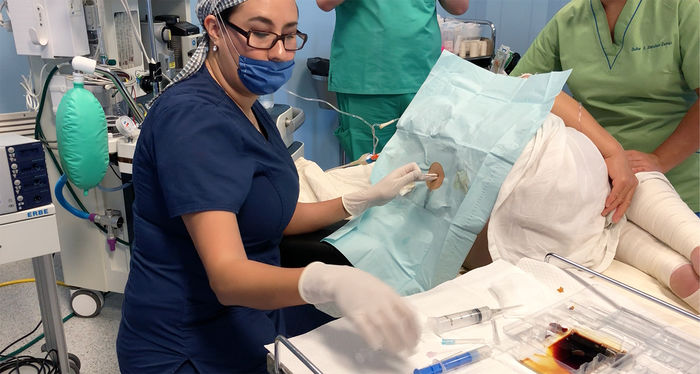 Paola Jaramillo Calderon performs an epidural at a hospital in Mexico.

It was 2011 by the time Jaramillo Calderon completed her schooling and began working. In 2016, she met the man who would become her husband. A geographer, he was traveling back and forth between his home in Tyrone, Pennsylvania, to Mexico for research. They married in 2018, the same year he was offered an academic position at Liaoning University of International Business and Economics. in China. One of Jaramillo Calderon’s biggest dreams had always been to travel the world, so she decided to take some time off and join her husband on the adventure.

As it turned out, the university needed English instructors, so Jaramillo Calderon ended up spending the semester teaching Chinese students how to speak the language. After the semester was over, both of their jobs complete, the couple spent some time traveling around Asia. “It was amazing, but also shocking and just a little bit frightening because I had lived all my life in Mexico. It totally changed my view of things, so that was awesome.”

And then ... that first tingle of ... something. Call it intuition. Call it fate.

While touring through China, Jaramillo Calderon’s father-in-law was diagnosed with Parkinson’s disease. “I get chills when I tell this story. It was a new diagnosis, but I thought we were too far away. I told my husband I had a feeling that we needed to get to the States.” They decided to leave in September of 2019—the first cases of COVID-19 began to appear in Wuhan, China, in December. “We were very close to being stuck in China during the pandemic.”

Instead, they were able to get to Tyrone before the pandemic spread and the world shut down.

But then what to do? Jaramillo Calderon says that like everyone else across the globe, she just tried not to freak out about what was happening. She tried to read and exercise and those sorts of things, but at some point, she had enough. “I thought this is insane, I’ve got to do something. I missed my career; I missed being in a hospital and the interaction with patients.”

It was time for her to return to work, but she needed to get licensed in the United States. Jaramillo Calderon learned that the process to do so normally takes two to three years and would require another residency. On top of that, the entire procedure was delayed because of the pandemic. There was just no way to know when she could start and when she would finish. “I was thinking to myself, ‘oh, my God, I cannot wait that long.’ I was 39 at the time, so I was like I'll graduate when I'm 84!”

That may be a bit of an exaggeration, but Jaramillo Calderon did not want to wait any longer than she absolutely had to. Continuing her research, she came across a certified registered nurse anesthetists program in Pittsburgh, but she had to be a nurse to enroll. Fair enough. More Googling turned up Penn State Altoona’s Second Degree Nursing program, an accelerated, sixteen-month program for those with a bachelor’s degree in another field seeking a fast track to the nursing profession.

There it was again ... that tingle.

“I don't want to sound super dramatic, but I found out about it and called literally one day before the deadline to apply for the program. I figured I didn’t have anything to lose.”

Advisers were able to work it out that if Jaramillo Calderon could get her transcripts and other documentation to them as soon as possible, she would be considered for the program. It took some hustle and a fair amount of begging to expedite her international paperwork, but it all came together, and in August 2022, she began classes. “The only thing I was thinking was that I could not wait to wear my scrubs again.”

Jaramillo Calderon doesn’t spend a lot of time feeling resentful or frustrated by having to essentially repeat her schooling. She says reminding herself that she’s still learning new things and that brushing up on the old is helpful. “I couldn't be in a better program. I’m so happy with it. The material is amazing, and my professors and classmates are awesome. It’s still challenging, and I’m not bored by any stretch.”

Jaramillo Calderon is scheduled to graduate in 2023, after which she will have to take and pass the National Council Licensure Examination (NCLEX-RN). Then she can enroll in that certified registered nurse anesthetist program to become the equivalent of what she was in Mexico. “I’m anxious to get back into the hospital. It’s my passion, my habitat, and certainly where I perform the best.”

Jaramillo Calderon says she will always be open to any opportunity that comes along, but she hopes to build her career in this area.

And as for what led her here?

“I do believe fate or destiny, whatever you want to call it, has a place in our world. But I also believe that little by little, we contribute with our own actions to that final destination we’re hoping for. It’s all worked together to get me here, right where I’m supposed to be.”