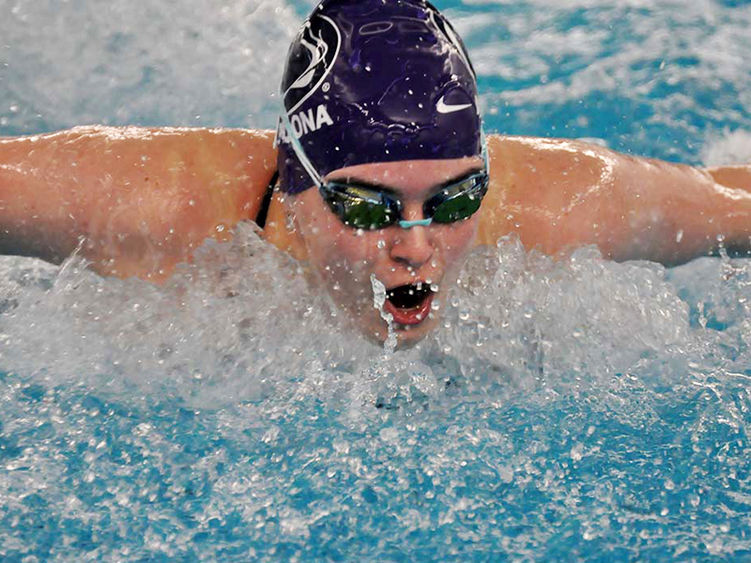 Penn State Altoona student-athlete Grace Dangelo was named the AMCC swimmer of the year on Feb. 25.

Leading the way for Penn State Altoona’s postseason recognition was Grace Dangelo (State College, Pennsylvannia/State College), who was named the AMCC Women’s Swimmer of the Year as the top point-getter among all of the league’s women’s swimmers during last week’s conference championships. This marks the second time in her collegiate career that she has earned the AMCC’s top individual honor among women’s swimmers, as she gained the same award during her first season in 2019-20. 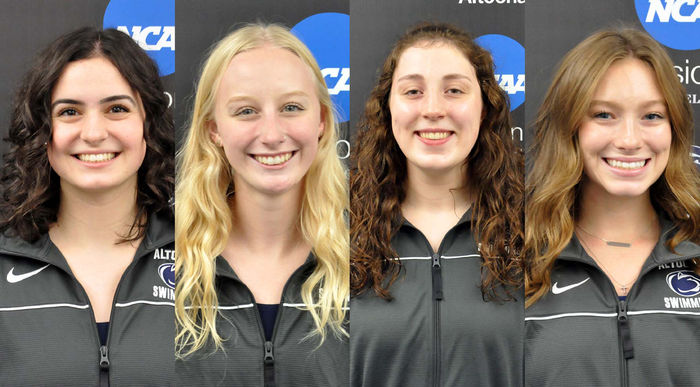 The 200 Yard Freestyle Relay final was held on Thursday, Feb. 17, and Dangelo, Heisey, Petry and Coleman posted a total time of 1:42.13 to rank first among the four competing AMCC squads and second overall out of eight teams in the ‘A’ final. Their time set a new Penn State Altoona women’s swimming program record, supplanting the previous mark of 1:43.29. In the 400 Yard Freestyle Relay ‘A’ final on Saturday, Feb. 19, Dangelo, Heisey, Petry and Coleman came together for a time of 3:43.43 to come in first place out of five AMCC teams and third out of nine total competing squads. The four swimmers’ total time set a new team record in that event, passing the previous mark of 3:47.03.

In the 800 Yard Freestyle Relay final on Wednesday, Feb. 16, Dangelo, Heisey, Petry and Coleman combined for a time of 8:16.05 to place second out of five AMCC squads and fourth out of 10 overall competing teams. Their time established a new Penn State Altoona women’s swimming record in that event, surpassing the previous mark of 8:34.72.

Dangelo secured first place out of four AMCC swimmers in the 200 Yard IM ‘A’ final on Thursday, recording a time of 2:15.39 to rank third out of 10 overall swimmers. In the Friday, Feb. 18, 400 Yard IM ‘A’ final, she clocked in at 4:50.67 to finish first out of three AMCC competitors and third out of 10 overall individuals. In the 200 Yard Butterfly ‘A’ final on Saturday, she finished in 2:22.22 to place first among five AMCC swimmers and second out of 10 total swimmers.

Heisey rounded out Penn State Altoona’s first team All-AMCC listings by earning recognition for the 100 Yard Butterfly. In that swim’s ‘A’ final last Friday, she finished in 1:03.81 to place first out of five AMCC individuals and fourth out of 10 overall competitors.