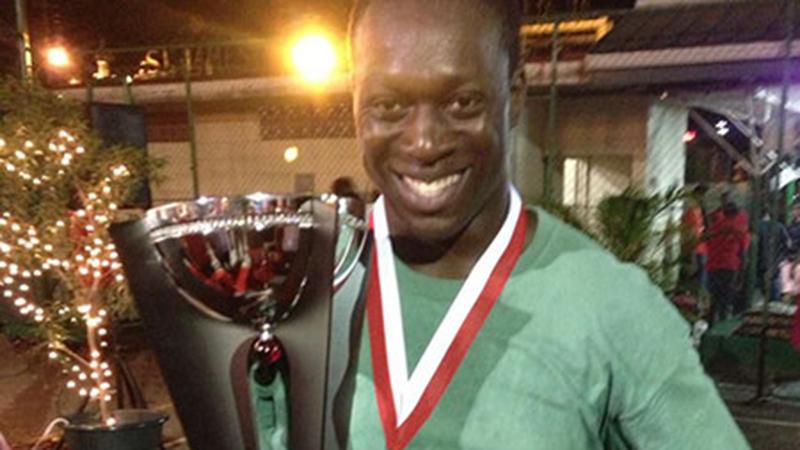 A World of Opportunities

Get to know Aaron Kennedy
By: Marissa Carney

You should meet Aaron Kennedy. You would immediately be taken with his adorable, easy smile and warm aura. And the fact that he uses words like “brilliant” and “mum,” and talks about fish and chips. Because he’s British.

Born in Manchester, England, this guy has traveled the world more in his two decades than most people do their entire lives. Some of that can be attributed to the world of sports and some to his own desire to live every moment he’s given.

Kennedy lived in England until he was 7, when his mother, an elementary school teacher, took a job in North Carolina. They stayed for three years until their Visa was up, then moved back across the pond for a year. Not a fan of the cold England weather, his mother was able to find another job in the more suitable climate of the Cayman Islands. “The Islands are beautiful,” says Kennedy. “I lived there eight years and met so many great friends. It’s a small island, you’re never more than five minutes from a beach. I’ve been swimming with stingrays and dolphins and that kind of thing.” While on the Islands, Kennedy earned a basketball scholarship to a high school in Maryland, where he stayed until graduation. While researching colleges to attend, he came upon Penn State and decided on the Altoona campus where he is now a junior studying accounting. Last year his mother was living in Texas but is now settled in Louisiana, and although he has a house wherever she is, Kennedy says there are two places his heart considers home; England and the Islands. “Those areas are where I lived for so long and that’s where a lot of my friends are, where I grew up and got my values.” It’s also where he developed a lasting love for rugby.

Sports have always been a huge part of Kennedy’s life. He’s played a long list of them, and he happens to be pretty good at all of them, especially rugby, which he began playing when he lived in the Cayman Islands. “My friends were already playing and were like ‘hey you’re a big guy, come and play,’ and I was like ‘I’m British, so okay,’ and it just went from there.” He was number 8, one of the forwards, the big guys who go at each other. Rugby is a form of soccer, known as football in England, which was developed at the Rugby School in Warwickshire during the 1800s. During games, players try to advance the ball to the opposing team's in-goal area without being tackled or otherwise stopped by the opponents. Rugby is famous for its scrums, when players are packed closely together, arms linked with their heads down attempting to gain possession of the ball. “It became my favorite sport. It’s just fun to play, and it also became a stress reliever for me. Whatever was bothering me, I could just go practice and play my aggressions out,” says Kennedy. With his team, Kennedy participated in tournaments in the North American Caribbean Rugby Association, which includes countries such as the Bahamas, Bermuda, Mexico, Jamaica, Canada, and the United States. Although Kennedy has been in the U.S for school the last several years, he was able to travel back to the Islands over the summers to train and compete in NACRA for the Cayman Islands. His team won the championships for the past three years in a row. The first year they claimed victory over Barbados, the next Trinidad and Tobago, and the third, just last year, over Mexico. It was during the win against Mexico, played in Trinidad, that Kennedy achieved one of his biggest accolades to date – MVP.

“It’s all about hustle and how well you played. I knew that year would be my final one playing for the under 19 age group, so I was giving it my all, going out with a bang, and there were just some great plays I made that were just brilliant,” Kennedy offers a bit shyly. “A lot of people were watching it streaming live together at the Rugby club in Cayman Islands. They said the sportscasters loved when I had the ball or made a tackle. They were like, ‘Aaron Kennedy again! He’s everywhere on the pitch!’” After each of the two games that advanced his team to the finals, an MVP was chosen, as well as after the final itself. “My coaches kept telling me, “Aaron, you’re up there, but we’re not going to give it to you this game. I was kind of disappointed that after three games I didn’t get it.” But after the championship game, all of the teams got together for an awards ceremony where Kennedy was named MVP for the entire tournament. “Then I was like, ‘oh! Ok, well then that’s worth it.’ I was just laughing and saying ‘yes.’ It was a great year to end my time with the age category I was in.”

Rugby isn’t the only sport that took Kennedy to different parts of the world. He was able to travel for flag football, soccer, and basketball to places like Canada, Wales, Trinidad, Barbados, and Cuba. “I love travelling, and I have gotten so much cultural experience. I want to go to Australia, China, New Zealand, and Tokyo, the Anime capital of the world!” Kennedy says if he could take certain parts of each location he’s lived and mix them together, he’d create his idea of a perfect place. “I’d take England for the fish and chips, sweets, and old friends, add the Cayman Islands’ warmth, friends, and rugby, then mix that with the jump rope team and Penn State Altoona, and that would be perfect.”

Wait. Back the double Dutch bus up a second – did he just say jump rope team? Indeed, he did. At 7, while living in North Carolina, he joined the Bouncing Bulldogs, a jump rope team based in Chapel Hill – Durham that boasts 200 national and eighteen international championship awards. He travelled all over the United States with the team competitively for the three years he lived in North Carolina. “Every day after school, I had practice. My team won a lot of stuff, I can’t even name everything. I can jump rope pretty well. I do miss it.” Kennedy says he used to compete with the team in speed and in double Dutch, and even got some gymnastics training while jumping. He says that will be helpful to him when he starts training for American Ninja Warrior, the obstacle course competition television show. “I’ve watched it for about five years and I love it. My friend and I go to a park by his place and jump over things and hang on things and doing hard core stuff.” Kennedy says he’d love to do that within the next ten years, before he gets “old.” He is, after all, already 20. He also wants to do some Tough Mudder courses and take up handball. “I feel like I’m good at a lot of things. I’m not the best at anything but I do like to try new things and then excel at them. With the size I’ve been given, I’m a pretty big guy, I might as well use it.”

Much as he misses playing rugby regularly, Kennedy made a conscious choice to focus on his studies during the academic years. He is excelling in the accounting program and loves working as a residence assistant in Spruce Hall. He does get some time to play some intramurals on campus and is the treasurer of the Campus Activities Board. “It’s a little bit hard, but it is a decision I made to buckle down and get an education, to focus on my future.”

Kennedy is quick to acknowledge his mother for her support in every aspect of his life. “I credit my mom with everything. She gave me so many opportunities and encouraged me. I did kind of hate her when she made me try out for the track team in the Cayman Islands. I whined, ‘but Mum, I’m not even fast. Fine, I’ll do it, whatever.’ It ended up being really fun. I did some javelin and 400, 800, and 1500 meter races, the high jump. I ended up getting first or second in every one of those events for two years in a row,” Kennedy laughs.

He is thinking about looking for an internship on the Islands this summer and plans to find a job in the United States or England when he graduates. And he definitely plans to find a rugby club wherever he goes. He is still eligible to play rugby for the men’s national and the men’s 7s teams. “I feel really good about where I am right now in my life and where I’m headed.”

Kennedy’s philosophy on life revolves around opportunities. “If there is something that presents itself or you want to go somewhere and do something, you need to do it because the world is a great place that needs to be experienced. Don’t just let the days go by. Take chances and create your own possibilities. Surround yourself with positive people.”

You really should meet Aaron Kennedy. You would love him.