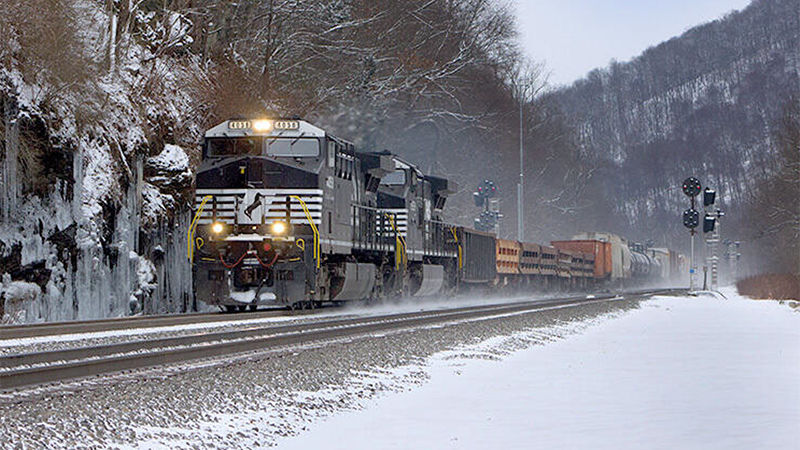 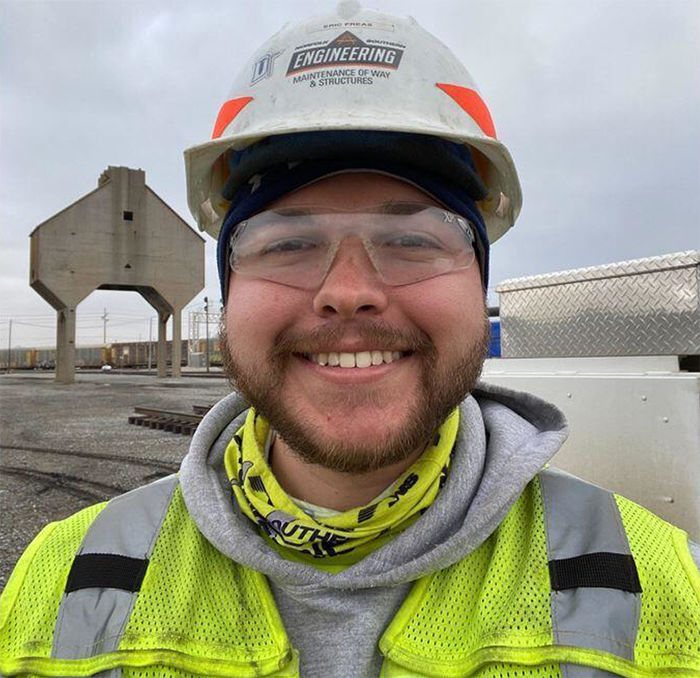 Eric Freas, a Supervisor of Track Inspections, is pictured at Norfolk Southern's Jasper Street yard on the west side of Decatur, Illinois.

It’s probably safe to say that not too many people enter college with a plan already in mind to work for a railroad after graduation. Eric Freas is one of them.

A native of Lancaster, Pennsylvania, a state that ranks number one in operating railroads, Freas earned a bachelor of science degree in rail transportation engineering from Penn State Altoona—the nation's first and only university to offer such a field of study.

“Instead of learning to design a building, I was learning how to build a track structure from the ground up, with the subgrade, the ballast, ties, and rail—all that,” he said. “It’s a neat program. I enjoyed it.”

Now, at 24, he’s living the dream. Last February, Freas was hired at Norfolk Southern (NS) as a Track Supervisor Trainee in St Louis. In October, he advanced to the position of Supervisor Track Inspections, based at the NS yard in Decatur, Illinois. In that role, he manages daily inspection patrols across some 110 miles of mainline track, ensuring that it meets FRA and NS standards and either fixing or coming up with a plan to fix track that needs repair. He also regularly monitors track conditions at the Decatur yard and at industries NS serves.

It’s easy for Freas to connect the work he does to supporting NS strategic plan goals.

“Track maintenance definitely plays a pivotal role,” Freas said. “One of our pillars in Engineering is maintaining train speed. That’s very important to us, making sure that the track is good for what we say it’s good for and that we keep the freight moving and help the economy keep moving.”

Ingredients for a winning railroad photo

His interest in track infrastructure extends to the trains that ride on them. While at Penn State Altoona, he made friends with a few fellow student who enjoyed going out and taking photos of NS trains. He bought a digital camera and joined in. A photo he took during one of those outings in 2019 was chosen by NS employees as a winner in the railroad’s 2021 photo contest.

In his photo, selected for January, NS locomotive 4058, one of the railroad's converted DC-to-AC units, moves merchandise freight over the Pittsburgh Line between Spruce Creek and Barree, about 15 miles east of Altoona. It had snowed the day before, and he had a day off from classes, so he and a friend went train hunting.

“We weren’t looking for anything in particular, but we decided we wanted to shoot something from that spot,” he said. “Some of the water on the rock face had frozen and formed icicles, and I really liked that, and I liked the old signals there in the background, too—it was where NS was cutting in PTC on the line, so you had the old signals with the new signals.” 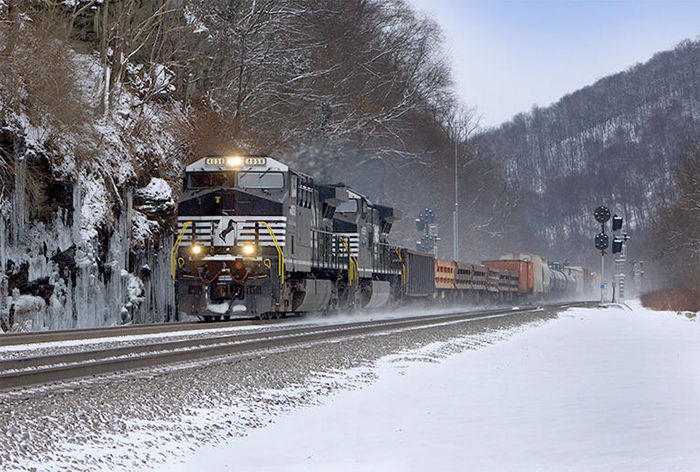 Freas said he likes working in an industry with such a long history and a vital role to play in the nation’s economy.

“I enjoy looking back through historical documents and books and seeing how the growth of the U.S. rail system correlated with the growth of our country,” he said. “That’s something I wanted to be a part of moving forward.”

On his job, every day is different, he said. If he has to work past his shift or respond to an issue over a weekend when he’s on call, he takes it in stride.

“It’s the way she goes,” he said. “Our business is a 24-hour, seven days a week thing. If something pops up, I stay until it gets fixed.”