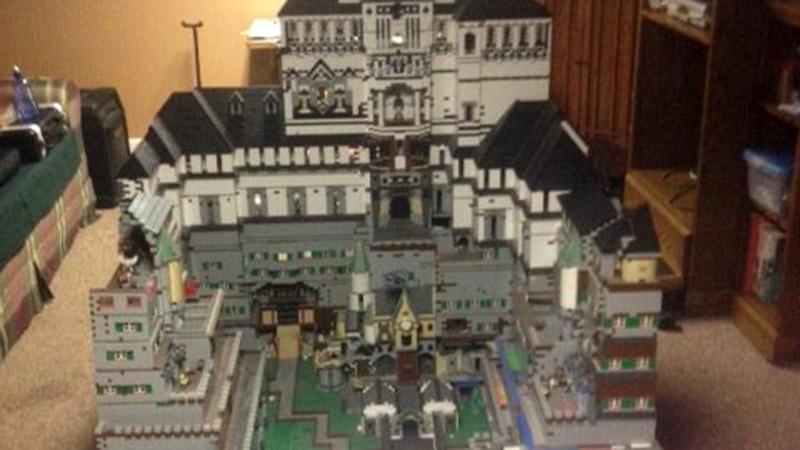 Who among us doesn’t remember the absolute joy of dumping an entire container of LEGOs onto the floor of our childhood home: the cacophonous whoosh of the pieces spilling out, and the endless possibilities in those hundreds of blue, green, red, and yellow squares?

For Spencer Golomb, that bliss has never faded. It took hold as soon as his little 2-year-old hands could put pieces together and hasn’t let go, even now that he’s 20 and a junior in college studying EMET.

At 9, he began building a simple structure in the basement of his Martinsburg, PA, home. At the time, castle Lego kits of Lord of the Rings, Harry Potter, and The Legend of Zelda were big and they sparked an idea in Golomb’s head. He wanted to build his own castle, and he wanted it to be BIG, as in ‘I-wanna–make-this-thing-touch-the-ceiling’ big. With that goal in mind, and a design all his own, he set to work. He began with a small castle to his left, then another to his right, then he decided to connect the two with a horseshoe shape, followed by a giant tower in the middle, “and it just kept going from there,” chuckles Golomb. At first, he only had a small selection of pieces to work with. He would purchase kits and pull out the bricks he could use. Later, when he was able to purchase the bricks online in specific quantities and colors, his options exploded. “Even though I always had a vision of where I wanted to go next with it, and could get the pieces I needed, I was somewhat limited by the space in my basement. I had ideas, but I had to build within the area. I had to figure out how to condense it all and make it fit and connect.”

Golomb describes it as the kind of castle that would be built into a mountain (think Minas Tirith from Lord of the Rings) rather than one that would sit in an open field. It is about six feet wide by eight feet long and more than six feet tall. It’s a few hundred pounds made with hundreds of thousands of pieces. Golomb estimates he has a few thousand dollars invested in the project. Perhaps like many construction workers, he laments the climbing cost of supplies. “I remember in 2005, it was about ten cents for a standard brick. Now they’re up to nearly thirty!” He shakes his head and grins. “Inflation, I guess!”

The structure has a river and a landscape around it, a main wall, and two towers with working catapults. But wait. There’s much more. We’re talking a feast hall complete with food, an armory, stables, and residential areas with bedrooms and dining rooms. There is a moat, knights and peasants, and even a king and queen. It is its own little world.

What Golomb likes best about his masterpiece is being able to see his progression as a builder over the years. “Where I started at the bottom, it’s pretty junky. But then as I got older, you can tell that my skills got better and better as far as building and constructing and getting a grasp of how to manipulate bricks and make different shapes.” As a kid, Golomb just wanted something big. Now, he wants details and intricacies. “Back then, I would think, I want to make a room. Now I say I want a room, and it’s going to have this color carpet, this kind of pattern on the wall, this kind of tile on the floor, and this kind of furniture.”

Now that he’s in college, living on campus, and working as a residence adviser, he doesn’t get as much time to work on the castle, usually only over summers and semester breaks. Even so, Golomb says, after eleven years, his masterpiece is nearing completion. Right now he is remodeling some of the parts he built when he was younger to make them look nicer. He fancies himself an artist because of what he’s created with his castle and with other smaller landscapes and structures he’s built over the years. “If you design a landscape or environment on the computer, that’s considered art. If you make a painting of a landscape, that’s art. If you make something out of Legos, it’s the same thing. You’re taking a vision you have in your head and making it into something tangible. Creativity and skill go into it.”

Golomb is constantly amazed by what other people have built with Legos: life-size statues and sculptures, full-size cars, movie characters, all crafted to the finest detail. He is particularly impressed by a man who built an entire Dwarven City from The Hobbit on his own. “I feel like what I create is nothing compared to what I’ve seen out there. There’s me down here, and then there are other people making amazing things. I don’t know how they do it!” He draws inspiration and even technique from what he sees online. For example, he found out how to create arcs by putting tiny round pieces between the bricks and then bending them. “I didn’t know that until I was looking on the Internet. I said, ‘oh, I’ve never seen that technique before.’ So, I stole that one,” he laughs. “Now I can make round towers and fancier things.”

Over the years, Golomb has had a few mishaps with the castle that have frustrated him. He recalls the worst problem from the get-go. Unbeknownst to him, he began building over a drain, right where the floor would taper inward. Everything he built in that vicinity would crack apart in different areas and drive him crazy because he couldn’t figure out why. When he did, he fixed the problem by adding some shims, but still occasionally has some trouble in other places where the floor isn’t even. Another time Golomb remembers catching his coat on the structure ripping part of it off. “Those are pretty extreme examples, but I still get frustrated with smaller things. Usually, I just say I’m done and take a break.”

Of his work, Golomb says his friends have one of two reactions; they either think it’s awesome or they want to wreck it. His parents have been patient with the construction, their biggest question being if he plans to take it with him when he has his own place. “Definitely,” answers Golomb. He is also thinking of what he wants his next project to be: something smaller but much more detailed, maybe a smaller village and castle. “I really like medieval types of buildings. They’re so cool because you really can make whatever you want, whatever world you want, whatever your imagination can think up.”

His love of Legos has been consistent all of his life, and it’s something he knows he will carry with him through the rest of it. “It’s fun, and there is nothing wrong with holding on to some of the things from your childhood. It keeps you young. I never let the whole growing up thing get in the way of my building because it’s something I enjoy. And I’ll tell you what! My kids are going to have all kinds of Legos to play with. I’ll tell them this is what I built when I was young; here’s a pile, build me something better.”