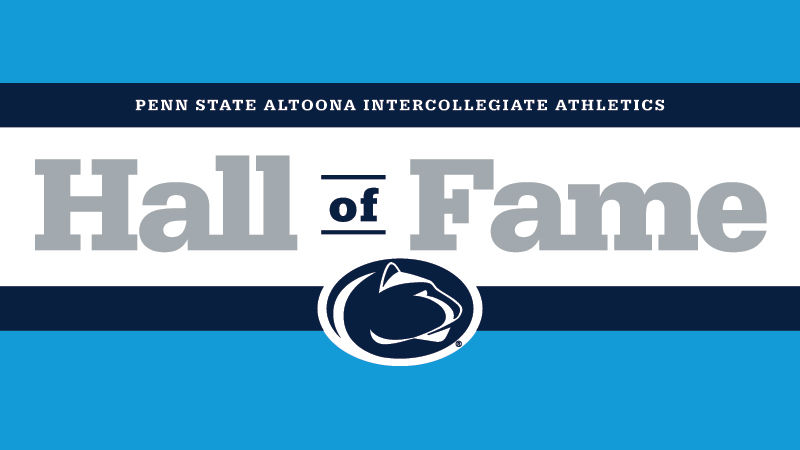 The Penn State Altoona Athletics Advisory Council announced its first Hall of Fame class on Wednesday, naming five individuals and one team as its inaugural group of inductees.

"The Athletics Advisory Council is proud to announce our first Hall of Fame class. I congratulate the inductees on their accomplishments as student-athletes and in their time since leaving Penn State Altoona. This class will set the standard for future inductees"” stated Tom Koehle, chair of the Penn State Altoona Athletics Advisory Council. "This induction will hopefully be a starting point to a celebration of the rich history of Penn State Altoona Athletics, dating back to the college’s founding in 1939 as the Altoona Undergraduate Center. Our inductees are delighted at their recognition, and we look forward to our alumni, community, and campus celebrating with us."

The Penn State Altoona Athletics Advisory Council, which began accepting nominations to its newly-created Hall of Fame last February, considered many criteria in its inductee selection process. Membership as a regular inductee is open to individuals and teams who have, by their participation as undergraduate student-athletes in the Penn State Altoona Intercollegiate Athletics program, performed at a high level of athletic excellence. Special inductees may earn membership through their involvement and/or accomplishments in athletics or athletically-related areas after attending Penn State Altoona, and/or by their example, character, and life accomplishments that set standards of excellence worthy of induction.

"The inaugural class of the Penn State Altoona Athletics Hall of Fame is a prime example of the impact that members of the Athletics community make on campus to this program and beyond. From a team and individuals that had exceptional years or athletic careers, to a player that went on to make his love of his sport into a career, to an individual who has left her mark by building the Athletics program we know today, to a professional who has become a world leader in medical research, this class represents all that we aspire to be as an Athletics program," said Penn State Altoona Director of Athletics Brent Baird. "With this class, we set a standard and provide examples to our current student-athletes that making an impact can happen in so many ways on campus and in the world beyond. We are so proud to call each of these inductees alumni of our Athletic family."

For more information on the Penn State Altoona Athletics Advisory Council and Hall of Fame, visit the Hall of Fame website.

During a 37-year career with Penn State Altoona, Ingold made a lasting impact on the campus’s Intercollegiate Athletics program. As Director of Athletics, she navigated the program through difficult times in the early 1990s, when the campus eliminated sports altogether. From that point, Ingold’s leadership resuscitated Intercollegiate Athletics at Penn State Altoona, transitioning it from junior college status to NCAA Division III membership. Her effects on the program are still felt today in many ways, including her championing of the Adler Athletic Complex Expansion and Renovation Project and creating new and enhanced opportunities for student-athlete participation.

Klinar was a standout for the Penn State Altoona women’s basketball program in her two-year career, during which she was a member of the 2001-02 squad that won one of the program’s two AMCC titles. 19 years after the end of her collegiate playing career, she statistically still ranks as one of the best players in program history.

A four-year member of the Penn State Altoona men’s basketball program, Franklin ranks among the top players in Lions history in the team’s record books, including holding the title of an all-time leading scorer with 1,533 points. He took All-AMCC honors three times, including being a two-time first-team selection.

The Penn State Altoona women’s volleyball team achieved several significant accomplishments during the 1995-96 season. Coached by Olana “Tick” Hedrick-Sheaffer in her 20th season, and assisted by Andy Hoover, the team won three different conference championships, recorded a .941 overall winning percentage, and saw its head coach recognized for her performance while reaching a milestone in career victories.

Miller was a two-year member of the Penn State Altoona men’s basketball team, including helping to lead the Lions to the Commonwealth Campus championship in the 1967-68 season. After earning a Bachelor’s degree, Master’s degree, and Ph.D. from Penn State, Miller has gone on to a distinguished 43-year career in the field of microbiology at the University of Louisville School of Medicine.