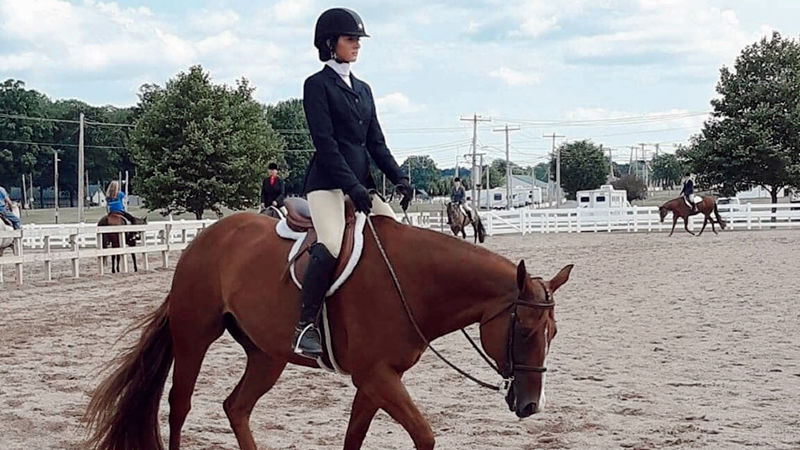 Not Just Horsing Around

Almost all little girls ask for a pony at some point, right? Of course, most of these requests are denied. But when, at age four, Paige McCabe told her mom she not only wanted but needed a pony, she actually got one: 15-year-old Bucky.

McCabe is quick to point out that Bucky came cheap and lived up to his name, as the first time she tried to ride him, he bucked her off. So, while Bucky stayed on as a pet, he remained unridden.

But McCabe didn’t lose her interest in horses. When she was 10 and found out her school bus driver also gave riding lessons, she signed on as a student. There, McCabe learned the basics and safety of riding Western style. Not too long into those lessons, McCabe’s instructor asked if she would be interested in competing in the Central Pennsylvania Horseman's Association Show in Bedford, Pennsylvania. Although she had no idea what it entailed, or even that it was a thing, McCabe was immediately on board. 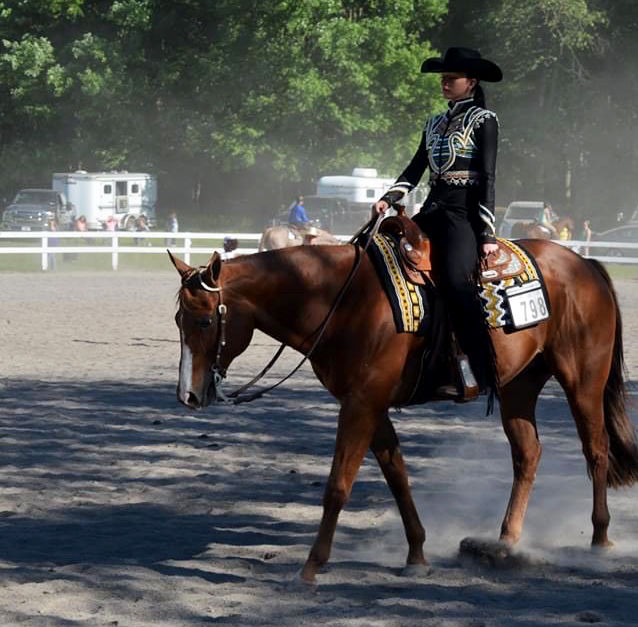 Her instructor told her to simply go in the ring, do what the judges asked, not worry about winning, and just have fun. “At that first show, there were 37 horses in my class, and I won. I don't know how it happened because I barely knew what was going on. But I remember thinking, ‘this is what I'm meant to do.’ And I’ve been doing it ever since.”

And she’s been doing it with the same horse, a quarter horse named Ben-Jammin’, Ben for short. McCabe’s family had been leasing Ben from her instructor but was able to purchase him later on. They’ve been show buddies and best friends for the last decade.

When she was about 13, McCabe decided to show on her own. “I felt like I’d picked up on enough at my lessons. I started watching YouTube videos to learn from different perspectives and just kind of taught myself from there.”

While already trained, McCabe says there were certain things Ben-Jammin’ didn’t know how to do. For example, he didn’t have a competitive lope; it was very fast when he was supposed to have a slow and soft gait.

“As a 13-year-old girl, I was teaching him how to do those things. When we first started to work on something new, he would often fight with me, throw his head against the wall, and all this crazy stuff. Then a couple of weeks later, I’d see progress, that he was actually doing what he couldn't or wouldn’t before. It made me so proud because I did that all on my own.”

The family bought a horse trailer and began traveling for shows on the local and state levels. McCabe competes in both Western and English disciplines, which require different saddles. Within each discipline, there are several different categories, such as equitation and pleasure. With a perfectly groomed Ben-Jammin’, McCabe gets into the ring and performs what the judge asks to see. There’s walking and trotting the rail, cantering, executing patterns and turns, and jogging, among others.

“There's a judge in the center watching every move you make. Judges are so picky. You make the wrong move, or your horse makes the wrong move, you can be disqualified or pushed to the back.”

After the judge tallies up the scores, they place the class, usually first through sixth, depending on how big the show is. “I’ve gotten a lot of firsts, and a lot of times I haven’t even placed. There are so many variables, like the mood your horse is in. Sometimes the judge won't like us, what we’re doing or how we look, and I don’t place, and then sometimes we'll wipe the whole show out. It just depends.” 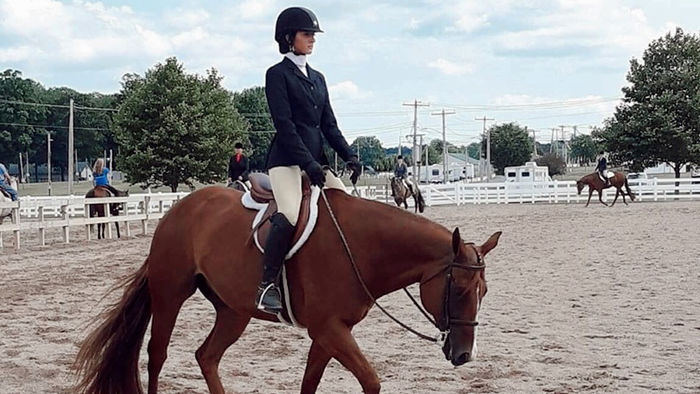 McCabe enjoys showing in each class but has a soft spot in her heart for Western. “I started out doing Western, so it’s my first love. It’s also fun because you get to wear blingy clothes—expensive show shirts and these pretty saddle pads that match your shirt. It's an expensive hobby, for sure.” Even though she can win money, it’s hardly ever enough to cover the costs of owning and showing a horse, let alone make a profit. But McCabe doesn’t care about that. “I just like doing what I do. It’s so fun, the money doesn't matter.”

Much as she loves showing, McCabe doesn’t want it as a full-time job. Knowing as a little girl she wanted to be a teacher, she's an elementary and early childhood education major at Penn State Altoona. She sees a lot of similarities between training a horse and teaching. “I’m going to be teaching kindergarten through fourth grade, in many ways getting those young students started on their education. And when you're training a young horse, you're starting them in their education. It's just a different type of learning." McCabe says that showing horses has helped her prepare for a future in teaching and its challenges.

“When I go to a show, I’m working and interacting with all these different people. I’ve learned a lot of communication skills because of that.” Further, it’s helped her develop a tough skin. “In the show world, you learn to not take anything personally. Some people are rude and difficult, and others are kind and easy-going. That’s taught me to go with the flow and understand that everybody's different and thinks differently.” McCabe says that’s helped her in college when dealing with her peers and instructors and knows it will carry over into her teaching career when working with children and their parents. “It’s all taught me to stand up for myself and have a strong backbone.”

With the fall comes the end of the show season and several months of light work and rest for Ben. “He deserves a break. We work pretty hard in the summer. Then once January and February come around, we'll get back into gear and start riding more, making sure we're prepared for shows. It's a serious thing.”

Working hard or resting, winning or losing, McCabe knows she belongs in the barn with her horse. “It brings such warmth to my heart. The barn is my happy place, and Ben is my therapy. When I’m down or even when I’m not, he makes everything better. He’s my best friend.”

As Ben-Jammin’ gets older and his limbs begin to tire out, McCabe knows her future in showing will eventually be with a different horse. “I know I’ll have to start over with a new one. I could buy one that's fully trained, but I don't see the pride in that.” McCabe says she’d prefer to get a two-year-old, the age they can start to be ridden, and train him on her own, just like she did with Ben. She not only has the drive within her to do so but the passion, as well. “I'm in this for life. I’m a lifer. I’m stuck and I can’t quit.”