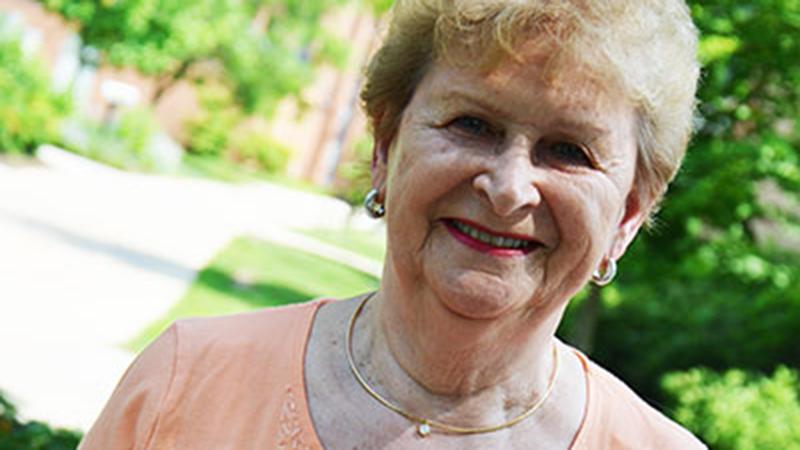 Penn State Altoona supports one of its own by walking for MS
By: Marissa Carney

When Joan Bergstein began working for Penn State Altoona in 1967, she had no idea how important the campus community would become to her family. Joan and her husband Jerry, both from Altoona, have been married for sixty-four years. They have four sons, all of whom attended Penn State Altoona, while Joan herself earned her associate’s degree in Letters, Arts, and Sciences from the college in 1987. Bergstein was a staff assistant for various departments throughout her twenty-seven years at Penn State Altoona and has remained friends with many folks who still work for the college.

What has strengthened her ties to Penn State Altoona perhaps more than anything is the Multiple Sclerosis Walk team Bergstein organized in 1994, the same year she retired. Her third son, David, ’76, was diagnosed with MS in 1984, eight years after he inexplicably lost sight in one eye. “They didn’t have MRI testing around here back then,” says Bergstein, “He was originally told he had optic neuritis and then vertigo, but he continued to have problems. He was beginning to think that he was imagining things. So one day he just picked himself up, got in the car, and drove to Hershey Medical Center. And that’s where they diagnosed him.” Multiple Sclerosis is a disabling disease of the central nervous system that usually manifests in those between 20 and 40 years of age.

The Bergstein’s joined the Hollidaysburg chapter of the national MS Society’s annual charity walk in 1991, and in 1994, Joan put together the first team of walkers from Penn State Altoona which consisted of eight people. Since then, Penn State Altoona has a team every year and has grown to include dozens of faculty, staff, and student participants. The willingness of those people, many of them strangers to David, amazes him. “He came out to a walk one year and was greeting people coming in,” recalls Bergstein. “He saw the Penn State Altoona people coming in wearing signs that read ‘I’m walking for David,’ and that made him feel so good, so happy and special. He said, ‘They don’t even know me.’ And I told him it didn’t matter, they were walking for him anyway.”

Over the last twenty years, the Penn State Altoona team has continually brought in the most money to the Hollidaysburg chapter walk, with Bergstein leading the pack in individual monies collected. Alone, she has managed to raise more than $150,000 for MS research and treatment, and in 2000, she was listed in the national “Footnotes Newsletter” as being one of the top 100 MS Walk fundraisers in the country. It was a lot of hard work and a lot of dedication. Bergstein spent a great deal of time writing letters, explaining about MS, strides in research, and giving updates about David’s condition. She would include a self-addressed envelope for donations and would receive nearly a 100 percent return each year. After the walk, she would then send hand-written notes informing donors of how much money was raised and thanking them for their generosity. “I’ve had some loyal donors, wonderful friends and family, who have gone through the years with me. And I’m just so thankful for them, that they’ve always been there to support me. Every year I would think ‘they’re going to get tired of me asking for money.’ But they never did. They were just amazing.” Both Joan and Jerry have also spent time volunteering at the local MS Society office helping with mailings or handling the phones.

Of course, anyone who’s ever been involved with a charity walk knows they are at the mercy of Mother Nature, so even the day of the event can be a challenge. “In the early days of the walk, back when we started, it was almost a ten mile walk,” remembers Bergstein. “We walked it in rain, snow, wind blowing so hard you had to walk backward. And we always did the whole thing. We’d walk the whole way around Hollidaysburg staring out around the loop area. And then when we would get to the top of the hill and see the end, we’d be huffing and puffing and thanking goodness we were almost there. But the good company and special people we met along the way always helped make the walk easier.” Now participants have a choice of doing a one mile around the track at Hollidaysburg Junior High or a five mile walk around town.

When she retired, Bergstein handed over the reins of team captain to Dan Wilshire, former campus instructor. Now, Sue Dodson and Nancy Vogel run the team. Says Dodson, “Because of Joan, our Penn State Altoona team has been the number one corporate team for years. She is our inspiration. It is amazing how much time and effort she puts into her fundraising. It really is a labor of love for her.”

But this year, Bergstein decided to hang up her walking shoes. “It was just time. I’m in my 80s now. I knew we’d come to an end at some point. This was a hard decision for me, and I feel very guilty, I really do, but it was time.”

Although there have been great strides in treatment for MS over the years, there is still no cure for it. And for all of her work, Bergstein knows little of it benefited her son because of his late diagnosis and the form of MS he is battling. However, she insists her efforts aren’t in vain, and it’s important not to give up because the monies donated are working. She says that today, there are more medications available to help reduce relapses and lessen the effects of MS. The funds support research and provide local programs and services that enhance the quality of life for MS patients. These advances give hope to the 2.5 million sufferers worldwide and to those who love them. “We are thankful that David is as good as he is after having MS for so many years. Even though he is no longer able to drive, he enjoys going out to eat with family members and spending time with his granddaughter. “He was always my ‘sole’ mate and my inspiration throughout the twenty-three years I participated in the walk. He kept me going.”

There are sixty-one people signed up for the 2015 walk on Penn State Altoona’s team. Dodson says that the team will miss Joan this year and in the coming years, but members plan to continue representing Penn State Altoona and walking in David’s honor. “I’m really proud of the team and what it’s done throughout the years,” reflects Bergstein. “I’m proud of my captains throughout the years and how they’ve gathered students, faculty, and staff together. We started very small, just a few of us, and it’s really grown. I think it’s good for the college, it’s good for the students. And of course it’s good for the MS Society and future of treatment. As I write in my letters, there’s no cure yet, but we’re not giving up hope.”