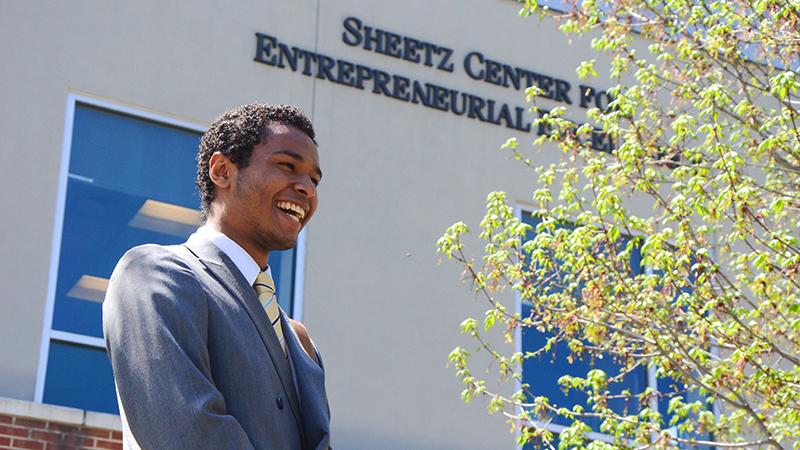 Looking Forward and Giving Back

Recent graduate Joey Hernandez reflects on his time at Penn State Altoona and what made his college experience so memorable.
By: Marissa Carney

Like many students electing to attend Penn State, Jose Hernandez, better known as Joey, planned to spend two years at Altoona, then transfer to University Park to complete his business degree. The Bronx native had no idea that choosing a concentration in either accounting or finance would impact that trajectory.

Focusing on finance would send Hernandez to University Park, but he would be able to stay at Penn State Altoona if he decided to pursue accounting.

“When I first started taking the accounting courses, the concept came very easily to me, and I found that I enjoyed it. I sat front and center in every class and was always answering questions and participating. I felt like I’d be a fool not to continue with it.”

Many of his friends tried to convince him to move to University Park, enticing him with other majors to pursue, courses to take, and activities to do. “But I felt like that was just the universe testing me, asking, ‘hmm, are you going to let this good thing pass you by, or are you going to listen to all these other people?’” Hernandez decided to listen to the universe and stay at Penn State Altoona. He does not regret that choice.

The small class sizes and close relationships with instructors were beneficial to his educational progress, and the opportunity to get deeply involved in extra-curricular activities was more than he could have hoped for. One organization Hernandez joined was Enactus, an international business society that connects student, academic, and business leaders through entrepreneurial-based projects. While a member, Hernandez took park in a fundraiser benefiting a school in Rwanda. The money was used for a biogas project, which converted raw materials like agricultural and municipal waste into a renewable energy source.

Going into his junior year, Hernandez was looking for something new. He considered joining three different clubs or putting all of his energy into the Sheetz Fellows program which he joined during the spring semester of his sophomore year. The Sheetz Fellows program prepares students to be leaders and challenges them through academics, mentoring opportunities, and study abroad, internships, or research initiatives. “I met with the program director and told her that I was staying at Altoona, and I wanted to be involved in something that would be the best use of my time and make my experience at Penn State Altoona really special." Hernandez also met with Steve Sheetz, the program’s benefactor. “I could tell that he doesn’t do this just to look good in the community. He really wants to instill in future business leaders the importance of philanthropy and giving up your time to help others. That was right up my alley.”

Hernandez grew up in the Bronx and was surrounded by other kids who had just as much potential as he did but who didn’t have the same opportunities or resources that were available to him. 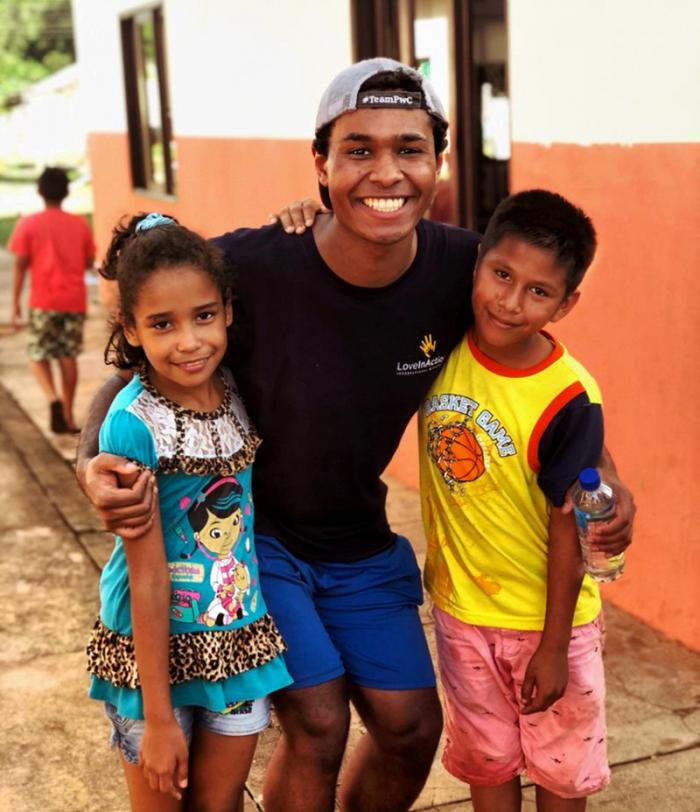 Through Penn State Altoona, Hernandez was able to travel with several other students to Guayaramerín, Bolivia, in partnership with Love in Action International Ministries (LIAIM). LIAIM is a non-profit organization located in Altoona that operates Andrea's Home of Hope and Joy, dedicated to rescuing orphaned, abandoned, abused, and extremely poor children in Latin America. “When I first heard about the project, I knew in my gut that it was the opportunity I had been waiting for. The intersection of my accounting and academic background with being able to give back was perfect for me.”

While in Guayaramerín, Hernandez and his peers began conducting a land use feasibility study for the orphanage and its 230 acres of land which includes a small barn with dairy cows and a fresh water source. The team was able to visit the farm to discuss additional ways LIAIM can maximize the land and its natural resources.

“When you do any kind of community service work or giving back, you want it to be an experience filled with love, and I definitely got that by meeting the kids at the orphanage. I was able to spend time with the very people who would benefit from the study.” 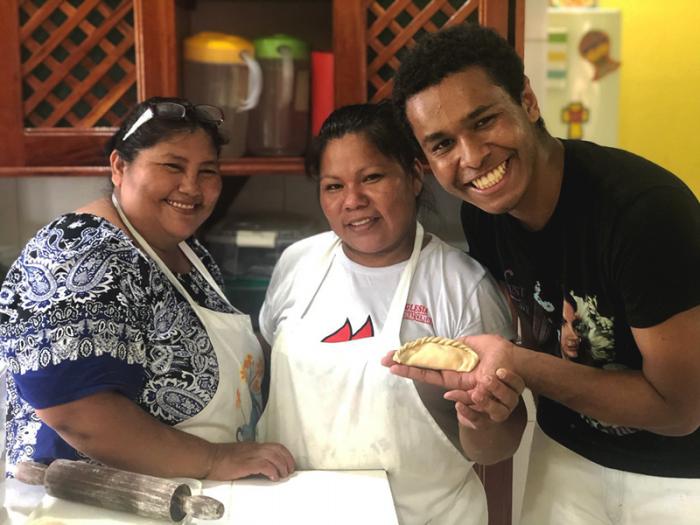 Hernandez says doing volunteer work through the college, Enactus, and Sheetz Fellows allowed him to make connections with others in the community who share his passion for philanthropy. He was able to help plan out and run an obstacle course for the Blair/Clearfield Association for the Blind’s annual field day. He also participated in Lobsterfest, an annual fundraiser benefiting Multiple Sclerosis.

Through Sheetz Fellows, Hernandez traveled to Europe for an education abroad trip. He spent six days in Amsterdam and four days in Berlin, his favorite part of the trip. “It was an insane experience. We went on several business visits, to several museums, and met with these really influential people— the movers and shakers in Berlin.” Hernandez was able to enjoy plenty of free time to explore the city and its history. “I got to go to the longest piece of the Berlin Wall that's still standing. That was one of our last days in Berlin and one of my favorite moments in my college career, for sure.”

As he prepared to graduate this past May, Hernandez reflected on his time at Penn State Altoona, all he was able to accomplish, and how much he’s grown. He says even though it’s cliché, he truly believes the world is his oyster right now. He credits the diverse portfolio of experiences and opportunities he was afforded through the college and the confidence he was able to build from all of it.

He currently works for PricewaterhouseCoopers in its international tax service group’s quantitative solutions team. Hernandez says he is having a great time working for the company and can see himself building a long career there. 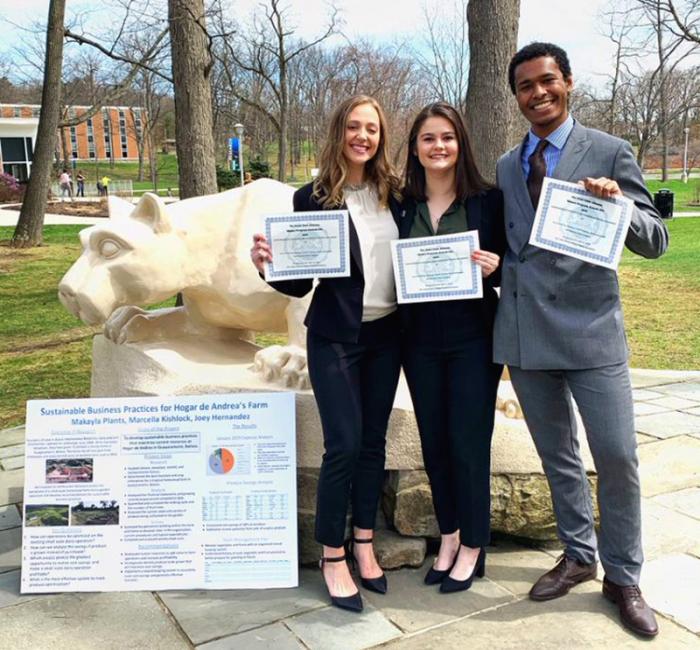 He plans to sit for the certified public accountant exam and attend graduate school in the fall. Further down the road, he wants to sit on the boards of several non-profit organizations. He sees himself coming into some financial gains, but then giving his earnings away. “That's the person I am. I feel like money isn't forever, so if you just sit on it, you're just going to be sad. You might as well give it away to people, because it makes you feel so good.”

Hernandez hopes to come back to Penn State Altoona to share ideas and things he’s learned with future classes of Sheetz Fellows. “Then it will be a full circle for me. The people who invested time and resources in me at Penn State Altoona will see that I am thriving and succeeding, and I’ll be in a position to invest my time and resources into students. That would be really rewarding for me.”