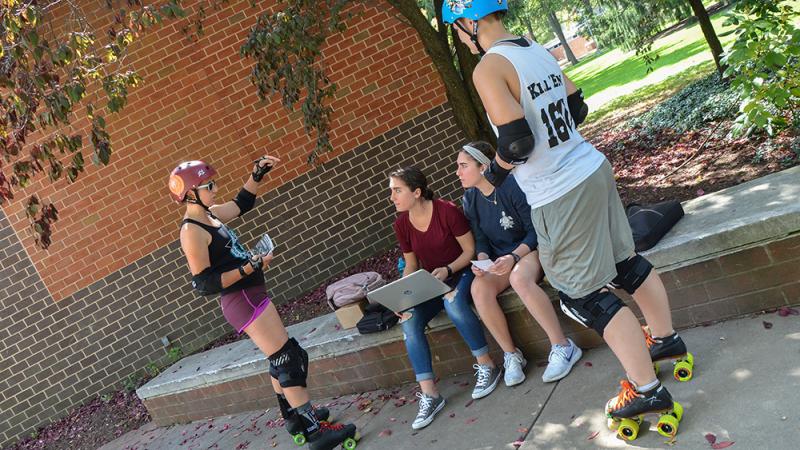 Just Roll With It

Roller derby is more than c-blocks, hip checks, and rink rash for a Penn State Altoona faculty member and student.
By: Marissa Carney 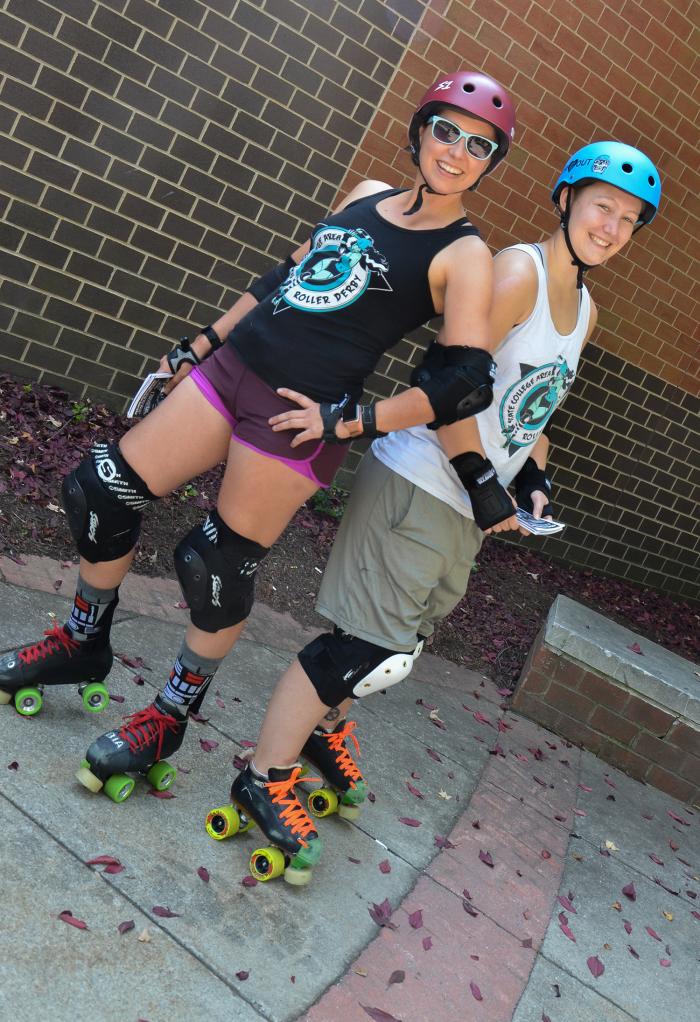 REBECCAPHOBIA and Kill ‘Em finish pulling on their knee pads, lacing their skates, and clipping on their helmets. They grab some flyers and zip through the front doors of Misciagna ready to engage the campus community, explain who they are, and try to recruit some fresh blood.

“It’s a sport for anybody,” says Kellom, who has been part of SCAR Derby for about a year and a half. “You don’t need to know anything about sports; you don’t even have to know how to skate. The team members teach you everything, and the league loans you the equipment. I fell in love with it, and all of the people on the team are just great human beings.”

SCAR Derby has a travel A-team, a travel B-team, and two home teams that practice year-round. The teams compete February through December in states from New York to Maryland, Ohio to New Jersey. Strzelec, who has been skating with SCAR for about two and half years, plays on several teams: the B-team, Plan B; Pennsyltucky Punishers, one of SCAR’s home teams; and most recently, the Happy Valley Dolls A-team, which is a member of the Women's Flat Track Derby Association and can compete for a national ranking. “It’s a big dog deal to be on the Dolls. I think the goal of most of the skaters is to make it onto the Dolls because it’s the best team, and you get to be listed on a stat sheet!” The Dolls are currently ranked 192. “I was close to making the Dolls earlier in the year,” says Kellom who plays for Plan B. “I feel like I’m on the cusp of making it, so I’m going to keep working and keep getting better.”

Strzelec believes SCAR Derby is making a good name for itself, evidenced by skaters from other leagues transferring to the team. “They see that we are doing so well, and they want to leave their home teams to play for us, and that’s really cool thing.” Even so, Strzelec and Kellom wanted to reach out on the Penn State Altoona campus in the hopes of getting more locals involved. “The team is in State College, and I’d say at least half of those in our league are affiliated with Penn State somehow. They’re alums or they work there or they attend college there, so it’s a great way for the league to interact with the larger central Pennsylvania community, our community.”

Roller derby and the State College league aren’t just for the younger crowd, either. There are women on the team from 18 into their 50’s who will still kick butt hardcore. Strzelec herself just turned 40 this summer. “It’s mostly bruises, and we have pads for a reason. There are still broken bones and bad sprains, but you learn how to fall and get your body to the ground fairly safely. That’s not to say that the day after a game I’m not moving a little more slowly than usual, but it keeps you young and lets you get out your stress.”

Strzelec claims she is a better mother because she plays roller derby. She loves being a mom and says her kids are awesome, but there are days when she’s so frustrated by motherhood. “I just can’t go into a gym and work it out. That doesn’t do it for me, but for some reason, the combination of competition, comradery, and athleticism of roller derby—that does it for me.”

For Kellom, it’s something even more.

"It’s hard to describe how much roller derby has changed my life. Honestly, I didn’t use to speak. I would just sit in the corner and listen, but now I talk to people and join in conversations. I have so much more confidence now. Roller derby changed a lot of things about me, and I’m grateful for that.”

Both Strzelec and Kellom have made best friends through roller derby, jokingly referred to as “derby wives.” They’ve been given the opportunity to express themselves in new ways and discover new things about who they are. They love being part of a team, and love the game itself. SCAR Derby claims to form a strong community of athleticism, healthy competition, and fellowship. REBECCAPHOBIA and Kill ‘Em believe it does. Maybe you would, too.