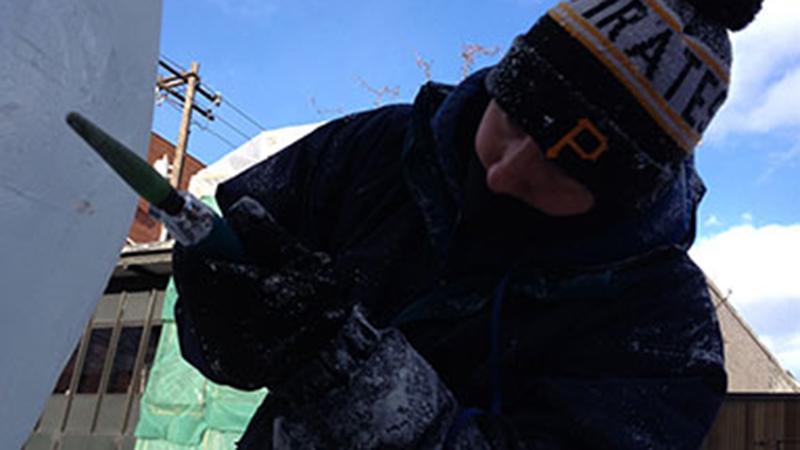 Ryan Crosby has been around ice practically his entire life, not gliding across it playing hockey or skating, but literally surrounded by blocks of it.

The Greensburg native is a junior in the EMET program. When he is able, he heads home to work in his step-father’s ice company, DiMartino Ice. But he does more than just deliver the ice to beer distributors and gas stations. He saws and chisels and grinds, and torches and creates masterpieces out of it. Crosby is an ice sculptor.

When he was 15, his step-father, also a sculptor, asked him to become his apprentice. “I would go to shows with him when I was younger, so when he asked me to do more, I was very excited,” recalls Crosby. “I never understood how carving was done. I found out pretty quickly that it’s not easy!” He began by learning about the tools, how to use them on the ice and, from there, how to carve.

Under the tutelage of Jared McAlister, also an employee of the company, Crosby spends a lot of practice hours carving swans, as an ice swan has every cut there is in the trade. States Crosby, “It’s frustrating sometimes because Jared is so good. The last time I did a swan it took me about two hours. He had four different carvings done by the time I finished one!” It turns out that Jared is more than “so good.” He’s one of the best in the world, having captured third place at the world championships in Alaska just a few years ago. Crosby feels lucky to be learning from him and hopes to enter the contest himself one day.

Typically, the guys will design a template on the computer, print it out, and then iron it onto a block of ice, usually about forty inches high and twenty inches wide. “That gives us an outline and we cut the form from there. Then we make it 3D by doing certain cuts and detailing. A lot of it is free-hand, which is funny because I can’t draw,” chuckles Crosby. “I’m still learning, but I am getting better.” Some of Crosby’s earliest sculptures include a lion mascot for his high school, a dragon, and a wishing well.

Crosby and the company do many shows throughout the winter, such as First Night in State College and the Chambersburg Ice Fest. It can take a few days to set up for events like these, especially if an ice slide is requested. The 40-foot slide takes several sculptors and hours to create, and then it is wrapped for protection until the event. The next day the “walls” - stacked 300 pound blocks of ice - are set up, which can be carved live during the event. Fun fact: blow torches are used to melt the first layer of ice, which cleans the ice and makes it clear.

Some businesses donate to the events and may ask for a specific carving, or simply let the team pick what to sculpt. One of Crosby’s favorites from this year was a twelve-foot giraffe. Weather can make the job harder when it rains or is very cold, although they do have insulated carving suits for such occasions. Recalls Crosby, “One year at a show in Ligonier, it was literally zero degrees when we arrived to set up with a wind chill of about negative twenty-four. That first half hour was rough. It was hard to get going, but we all just kept moving and then were alright.”

DiMartino Ice is often asked to make booze luges, items for weddings, and thrones for dances or balls. For the last two years, Crosby has made sculptures for Penn State Altoona’s Blue and White Ball. One year he made the Nittany Lion, and the next he created a paw print with the Four Diamonds logo underneath, his own custom design.

Crosby’s enthusiasm has spread to his friends. “They like to joke about how they don’t trust me with a chainsaw, but they think it’s cool. I’m even helping mentor two of my friends. I give them my own tips and they ask me for pointers and advice.”

Although he is studying engineering, Crosby is sure he will continue to sculpt. “It’s something different, and people get excited about it. I like making something out of nothing. I see progression and I keep getting better and better.” And, he finds it to be quite helpful with his major. “Carving makes me think outside of the box and pay attention to little things instead of just seeing the big picture. That kind of thing is needed to be an engineer.”

While Crosby considers ice carving an art, he doesn’t always think of himself as an artist. He says, “I’m never proud of anything I do. I always know where my mistakes are, and I can always tell even if others can’t. I’m never totally happy with my work. A lot of artists are never completely satisfied with their work, so I guess that does make me an artist after all.”