The woman who recently qualified for the 2019 Boston Marathon had, you could say, a less than auspicious start to her running career.

“I started running in the early summer of 2016. My husband wanted to lose weight, and he started running,” Lacey Wallace explains. “I wanted to be supportive, so I tried to run with him. I ran probably three houses down and threw up because I was so out of shape.”

Wallace says she was so upset and embarrassed, that she tried again the next day, determined to run even just one house further. “I did that for a year. I just went out and challenged myself to do a little bit better each day.”

At first, there was not one thing Wallace enjoyed about running. It was hard and everything hurt. But after about two months, when she wasn’t throwing up anymore, she realized that running actually had a calming effect on her. The assistant professor of criminal justice says, “I'm a high energy person, and I found that after a run, I was relaxed and mellow. While I'm running, I don't listen to music, and I don’t have my phone. For that hour or two, I can just be me and disconnect. It's a release, and it helps me focus on my work better.”

After about six months, Wallace was running three days a week. She noticed that she was getting faster and that she wasn’t out of breath going up a flight of stairs anymore. That’s when the idea of signing up for a race came to her. “I'd never run a race before or been an athlete at all, and I thought, ‘a marathon, why not? That sounds like a great idea!’ I just figured it would be amazing if I could do it."

So Wallace signed up for her first race, the Garden Spot Village Marathon near Lancaster, Pennsylvania. Not a 5K, which is 3.1 miles or even a 10K, 6.2 miles, but a full marathon—26.2 miles. Wallace recalls that she wasn’t at all prepared for the difficult hills that wound through the Amish farmlands. She’d only been running for a year and was covering only about 35 miles per week. She admits that she barely made it through, but she finished in 04:34 minutes, dead on average for a female runner. “I was so proud. I crossed that finish line, and I felt crappy because I'd just run 26 miles, but I also felt accomplished. Finishing gave me more motivation.”

Wallace was hooked. She started planning for her next marathon within two days. She set two new goals for herself: to get faster and stronger. She decided to get a tattoo on her arm of a woman running with 26.2 underneath and a star over her head and planned to add a star for each marathon she finished.

That next star would come with the End of the Road Marathon, held on a section of the abandoned Pennsylvania Turnpike in Bedford County. The race was held near Halloween, so those running, volunteering, and spectating were dressed as zombies and other monsters. Wallace finished in 04:07, shaving 24 minutes from her previous time, but it wasn’t easy. “It was pouring rain, and the temperature was only in the high 30s, so I hit stage two hypothermia by the end and had to be carried off the finish line by my husband and another runner.”

Wallace says even though the conditions were awful, she loved the atmosphere and the great location. “The tunnels are unlit and the longest one is about a mile and a half long so you're underground with zero light and all of these zombies. It's hilarious.” Wallace likes that because she does smaller races, they are more fun than competitive. “Everyone's just there, trying to do their best and people are so supportive of each other. The fastest runners at End of the Road were helping others with their shoes and helping them get warm when they finished. Everybody was caring for each other.”

After End of the Road, an idea began to take shape in Wallace’s mind. That idea turned into a goal, and that goal was the Boston Marathon.

Held every year on Patriot’s Day, the Boston Marathon is the world’s oldest marathon and regarded as one of the world’s most challenging races. To qualify, a runner must complete a certified course within a set period of time for gender and age. Only about 12 percent of marathon runners across the globe qualify. 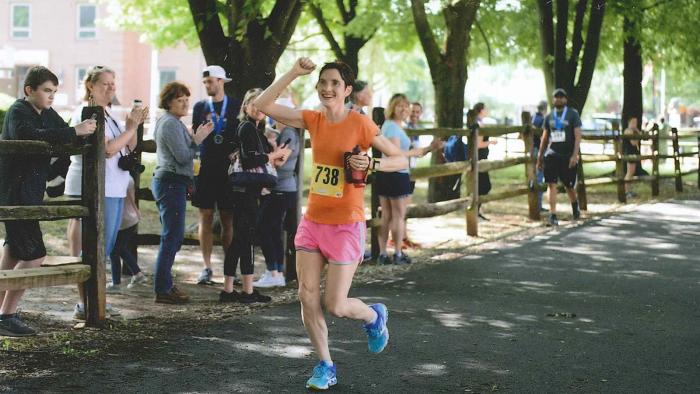 Wallace registered for the Garden Spot Village marathon again, a certified course, hoping to finish in the 03:35 she needed to qualify. It wasn’t meant to be. “It was 86 degrees and very humid. I think that I wasn't acclimated to the heat at all because I had been running in much colder weather. I didn’t make the time, and I felt very down after that. I had set a goal for myself and didn't meet it.”

That’s part of the reason Wallace decided to run the York, PA, marathon just a few weeks later. “I wanted to get myself in a better mental space. I told myself to just do it for fun. I spent that race just chattering with people around me and enjoying it. I feel like that reset me.”

Refreshed, Wallace signed up for the Erie Marathon held in Presque Isle State Park this past September. A Boston-certified course, Wallace hoped to qualify this time around, but tried to have the mindset of simply doing her best. “If I made it, I made it, and if I didn’t, I didn’t. At the end of the day, I still ran a marathon.”

The course through Presque Isle is beautiful, taking runners through forested areas and along beaches. Wallace says about halfway through she began to feel tired, which is normal. She thought she was doing really well, but didn’t believe she would meet the qualifying standards. But in the last three miles, she realized that she was going to do it. 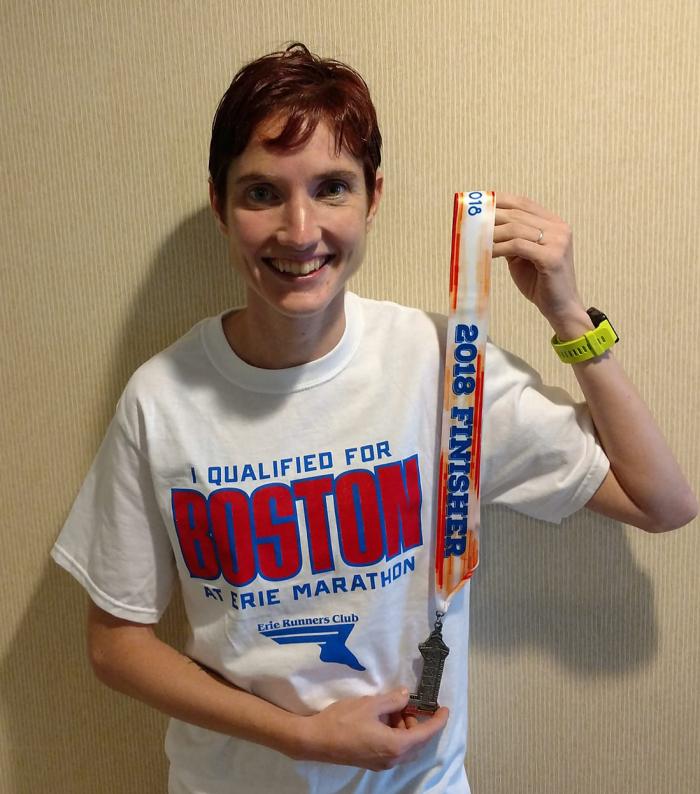 Lacey Wallace, after finishing the Erie Marathon and qualifying for the Boston Marathon.

“I started to cry in the last mile, because I realized that even if I walked the rest of the way, I could make it. But I ran. I ran strong. There was this one poor girl at the end, and I wanted to pass just one person, so I blasted by her, and when I crossed that finish line, I was just ecstatic. I’d worked for that moment for two long years.” Wallace finished in 03:27 minutes, beating the cut-off for her age and gender by 7.5 minutes.

The 2019 Boston Marathon takes place April 15. Wallace’s training consists of running six days a week. She does one long run, anywhere from 10 to 22 miles, along with speed training on the track or treadmill, tempo and hill training, and a few easy runs per week. Her training involves a lot of time and a lot of commitment. But Wallace rarely shies away from the work. “Sometimes when it’s raining or cold or it’s a hard run, I’ll have a moment when I don’t want to go, but each time I make myself do it. When it's done, I can say, ‘hey, I did that.’ No matter how gross it was, I did it. Sometimes a run falls apart or it sucks, but I’ve never not at least attempted what’s on my schedule. I’m not a quitter.”

Wallace is currently training to run the 26.2 miles at 03:15 and working toward 03:00. “It's going to take me a little bit, but I've been improving 20 minutes each time, so I think I can do it.” She knows the Boston Marathon will be the biggest scale race she’s ever done, but she is excited and ready.

By no means does Wallace think she’s reached her peak. She says that for long distance running, people usually continue to get better through their late 30s, so at 33, she’s got some time to improve even more. “I looked at the results from last year's Boston Marathon and the top people for the 50 plus category did way better than I ever have. Apparently age does not define what a person can do.”

And what of Wallace’s husband, the whole reason she began running in the first place? Wallace says he goes through phases of running himself. They don’t train together and he doesn’t run races, but he is her biggest supporter. “He goes to every race, and he's on the sideline with our kids. He makes sure I have water, and he helps with my nutrition to make sure I get the right foods and proportions. He's my planner, he keeps me grounded.”

Wallace is very proud of her accomplishments, but she knows that she is getting more out of running than just beating her best time. “I have nasty genes for health. In my family, there is obesity, heart disease, and diabetes, so all of this is also an effort to be healthy and be around a long time for my children. That helps me stay positive and motivated.”

In just about six months, Wallace will be living out a dream. Who knows where the paved roads of Boston will lead her next. 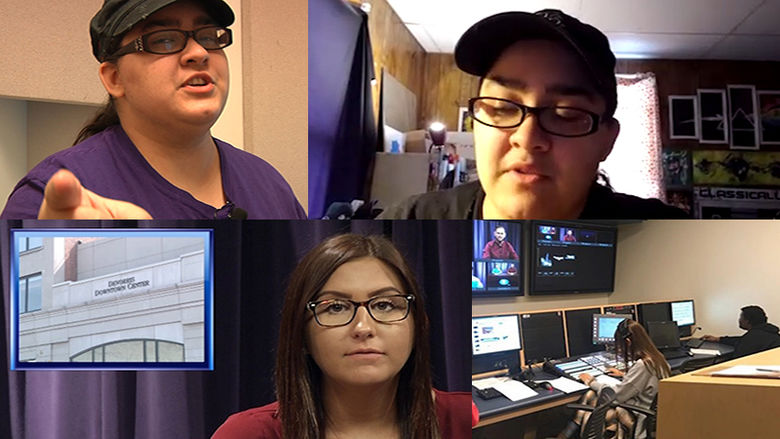 Collaborating on a Senior Send-off 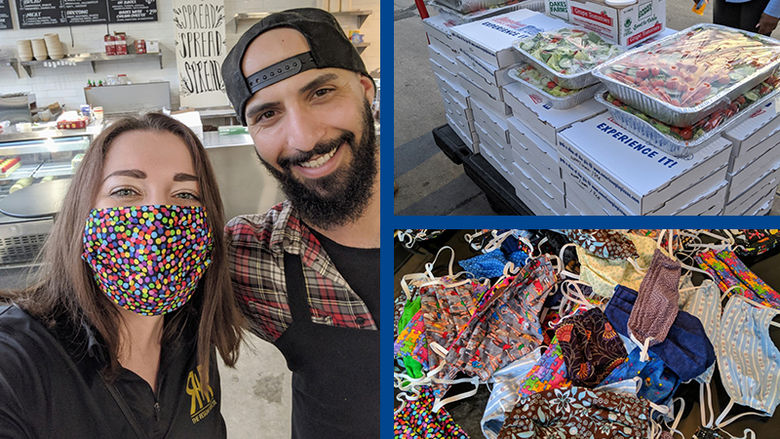 Altoona alumna delivers meals and masks to the front line