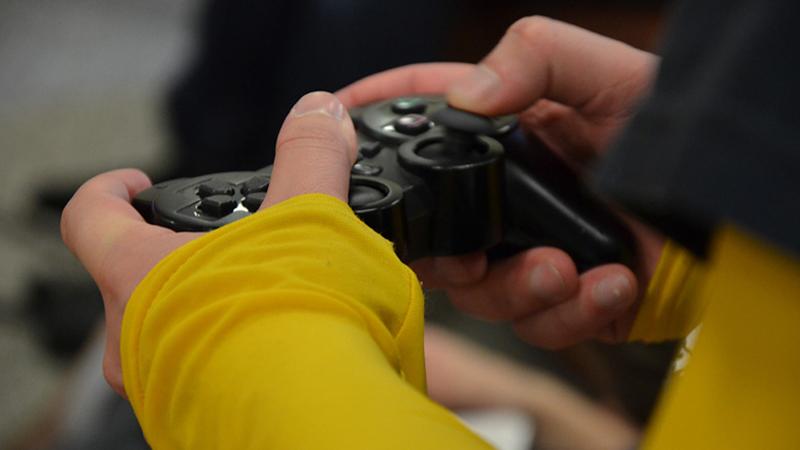 Penn State Altoona students are finding a home in the D6 Gaming Club
By: Marissa Carney

You can see them at just about any time during the day and on into the night, hanging out in the Slep Student Center. They may be in groups or they could be just chilling on their own. They are the gamers, the members of the D6 Gaming Club. 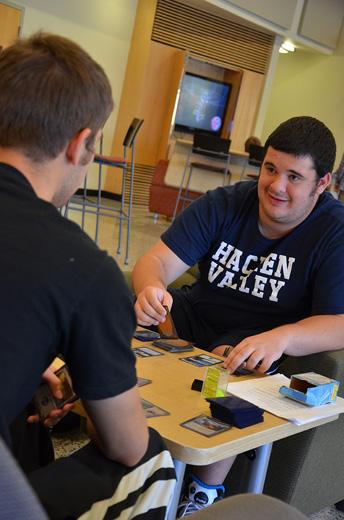 Stereotyped as a hobby for “dorks” and “losers,” gaming really is for everyone these days. There are games for every person, for every level of interest, and they can be played anywhere at any time. Angry Birds on your phone in the waiting room at the dentist. Candy Crush over lunch break on your iPad. Words With Friends before bed with someone you’ve never even met.

If there is that much satisfaction in on-the-go games, there is definitely something to be said for playing sit-down or console games with a group of people. Video games often include complex story-telling that draws players in and allows them to be part of those stories and to share in them with others. And so the members of the D6 Gaming Club, whether quiet and reserved, or excitable and boisterous, enjoy having a recognized organization to belong to at Penn State Altoona.

The club has only existed for about two years but has been steadily growing in popularity. In fact, it was the hottest table at the fall Student Involvement Fair as game lovers crowded around to learn more about becoming a member.

Henry Baust, a sophomore studying history, has always been a gamer and was excited to find the organization when he began his college career. He likes the laid back and easy going atmosphere of the club and thinks it is inviting to everyone. “There's no stress. You can come down, hang out with friends. Everyone's kind of into the same things that you are. So if there's a game that a lot of people play, you can jump in with them or you can find people to play games you're interested in. There's always people willing to try new things. You're just never bored. There's no possibility to get bored.”

The club offers several different divisions, and students can belong to more than one. There are specific game divisions such as League of Legends, Magic: the Gathering, and Dungeons and Dragons, but there are also more general areas like a tabletop or board game group, a console gaming group, and a group for people who like to play card games. Baust, who is head of the tabletop division says, “There are very few rules, other than don't be a jerk. And so it's a good space that you can come down, you can hang out for a few hours. You can spend some time, relax. A lot of my friends hang out here, and I've made a lot of friends through D6.”

One of the cool things about the club is that there is always something going on. Games can be played any hour of the day just about any place, although members usually set up camp in Slep. “We can just meet up. As soon as the first class ends, people start coming here for their downtime between other classes or work. They don't want to go back to their room and sit around and do nothing, so we all just pool up here,” says Joshua Antonik, a senior from Altoona.

As president of the club, Antonik is always trying to make things better and more structured. This semester, Fireside Lounge in Slep is reserved for an hour every Thursday for formal meetings. One of the things club leaders like best about being a recognized student organization is the ability to create events and have access to University funding for them. For example, the tabletop division uses a lot of painted miniatures for games, and last year, members were able to get a little bit of money to purchase new miniatures as well as hold an organized event for club members to paint them. “Just those extra things are good,” says Baust. “Also, it’s great to have a space that we can guarantee if we need it. When we don't have any actual events we just kind of gather in any open space in Slep, but the ability to rent a room if we need it for a tournament or event is great.” 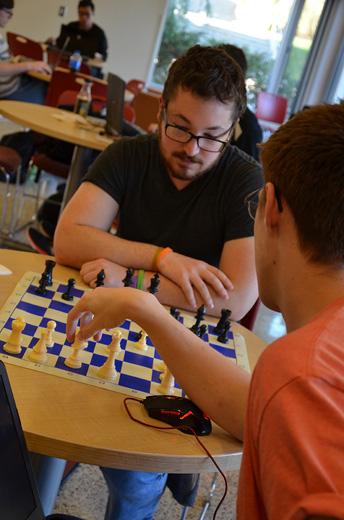 The club held a Halloween party October 30 and hosted a League of Legends viewing party for the 2015 World Championships the next day. In early November, members organized a local function for the 24-hour gaming marathon event Extra Life, an international charity which raises money for Children’s Miracle Network.

On top of the fun of playing games and holding events, members genuinely enjoy each other’s company. “It's great seeing everyone together, even if we are broken up into small groups. There are a lot of people that I'd probably end up meeting, but not hang out with if we didn't have something like this, so I appreciate it even more because of that,” says Antonik. Adds Baust, “The people I've met through the club, the friends I've made. There's a lot of really cool people around here that I love talking to. Not even just playing video games, but hanging out and talking to them about things. It really is more of a community than a club.”

Club leaders are hopeful that the community will continue to grow. They’d love to share the joy of the D6 Gaming club with as many people as possible, and to keep bringing new blood into the group. Antonik considers Slep a second home and club members a second family. There’s room for everyone in the gaming world.