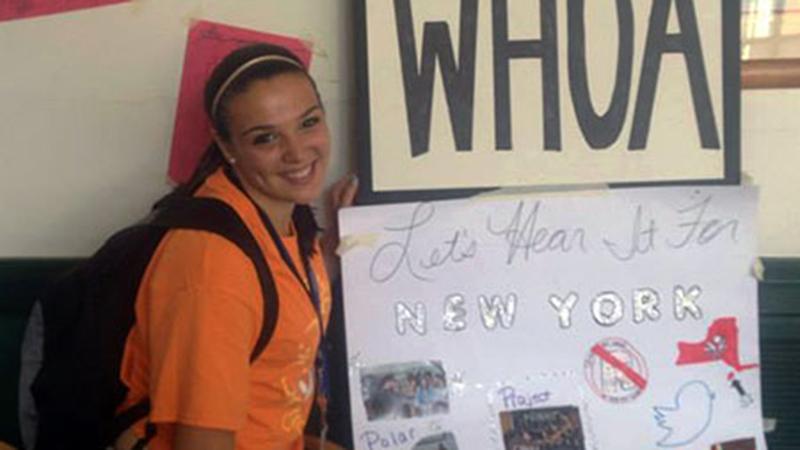 Elizabeth Strange devotes herself to the Special Olympics
By: Marissa Carney

Elizabeth Strange could have given up on herself. She could have quit trying, quit working, quit believing she would make it in the world. In fact, she almost did for a time. But then she found renewed purpose and worth in devoting herself to the Special Olympics.

Strange attended a small all-girls private Catholic high school in her hometown of Staten Island, New York. She was used to struggling a bit with academics but was thrown for a loop in her junior year when she was diagnosed with a learning disability. Having a title somehow made it all seem much more real to her. “It took a toll on me for a while. I strayed away from academics, I felt like I couldn’t go to such a good school anymore. I wanted to change schools or drop out altogether.”

Because of her poor grades, there were many school activities Strange couldn’t take part in, but was able to remain involved with the small Special Olympics club at the time. Knowing she was struggling with her diagnosis, her math teacher suggested she start spending more time at the community center not only helping out with the Olympians but to practice reading to them. She was stubborn at first, down on herself and uninterested. But her teacher kept after her. “She said to me, ‘I know you. You’re not a quitter. You’ve gone fifteen years without even knowing you had a disability, don’t let it stop you now.’” Strange says her principal and many others got behind her, as well. “Usually, at a Catholic private school, you’re supposed to get kicked out if you’re failing two subjects. I was failing four. But I saw all these people backing me up, so I decided to give it a try.”

Although she had been involved with the club before, Strange now began spending more and more time at the center, helping Special Olympics adults with activities like arts and crafts and playing games. She started feeling more comfortable and accepting of herself through her work at the center. The coordinator of the high school’s Special Olympics club took notice of Strange’s changing behavior and how much she was enjoying the increased involvement with the organization. That year, the coordinator was asked by the state director to send a student to the Special Olympics North America Conference, which only occurs once every ten years. It was an easy decision. “I was blown away,” remembers Strange. “Going from just being involved in a general club to representing the youth of all of New York was an amazing opportunity.” Strange traveled with one athlete and her adviser to North Carolina for five days. There, she heard the CEO of Special Olympics speak, along with other national leaders. She attended seminars and learned about Project UNIFY, an education and sports-based program to bring youths with and without intellectual disabilities together in schools. “I let my whole heart out during the conference. I got involved in anything I could, went to any programs that I could, spoke to anyone I could.”

Someone took notice and saw something incredible in Strange in just that short amount of time. On the last day of the conference, the head of Project UNIFY, Rebecca Ronalson, pulled Strange aside and asked her to apply for the National Committee. “That she saw youths from fifty states and personally asked me to participate was amazing,” says Strange. She didn’t hesitate or worry about her learning difficulties or her self-worth; rather she jumped at the chance and applied right away. She was selected, joining eleven others from across the country to serve on the national committee.

Strange dove right in, relishing her involvement. Things really got rolling during her senior year when she took on two enormous leadership roles. The first was to help organize and plan conferences for the first in-person national youth activation meeting, and the second was to assist in planning the closing unified sports festival for the National Games in New Jersey. “People in my high school were shocked and so proud that they had a national leader now. And it was someone who almost dropped out of high school. It was an incredible experience for me.” Strange participated in two in-person conferences that year and phone conferences every Sunday with other youth leaders from the U.S. to put together the event. “It was so awesome to be leading when the year before I was just learning about it.”

What Strange is most proud of from her senior year in high school is that she was able to lobby Congress on behalf of New York for Special Olympics. In March 2014, she traveled to Washington, D.C., and met with national government leaders. “Going from someone who felt so illiterate, someone who only wanted to hang out with Special Olympics people, to someone who spoke confidently with senators was incredible. I spoke, and they were actually listening to me. I honestly felt like I could do anything after that. I could get into college, I could pass the SAT, I could take the ACT. I felt that if I could talk to Mayor Bloomberg or any senator or congressman, I could do anything high school and beyond could throw at me.”

At the same time, Strange was continuing her work with the local community center, helping cultivate interest and involvement from more students at her high school. She also worked to create a Special Olympics New York program and to implement Project UNIFY in schools around America. She went from being dead last academically, in a class of 101, to graduating somewhere in the middle. “Joining Special Olympics and getting so involved was the best confidence booster I ever could have had, the biggest self-esteem enhancer I ever could have experienced.”

Now 18 and a first-year student studying hospitality management, Strange is a part of several campus groups including THON, the Campus Activities Board, and Gamma Phi Beta. She still finds time to devote to the Special Olympics by sitting on the national committee. As such, she will attend conferences in November and April. Her subcommittee reaches out to high schools in other states, offering assistance and suggestions. She also continues her work with the New York state organization and often visits her old high school to share ideas with the Special Olympics club. She’s been able to bring fundraising techniques and other skills to her work with Penn State Altoona organizations because of her experiences. “When I would apply for a position here, some people didn’t believe that I’ve done what I’ve done. I wanted to be Special Events Chair for CAB, and when I told them I had to deal with 3,000 people coming to an event I planned, they wouldn’t believe me.” Strange got involved with Special Olympics Pennsylvania by sharing information and best practices and was invited to attend the Pennsylvania State Games in June, to be held in State College.

Strange’s terms on the state and national committees will be up at the end of next year, but she is already planning to re-apply to both. She is thrilled with what she’s accomplished so far, how much she has learned, and the connections she’s made throughout the United States. “Special Olympics taught me that I want to be an event planner. I really wanted to go into occupational therapy, but through all of this, I realized my personality is a lot bigger than working in an office.” Strange is flourishing, certainly, but that doesn’t mean it is smooth sailing now. She still has to work very hard to overcome her learning challenges. “I still have to get extra time for tests and take easier classes. It’s not as easy for me as other students, but I know how to cope with it, and I’m not embarrassed by it anymore.”

No, she’s not embarrassed. She is actually extremely proud of herself. She has been asked to return to her high school and speak with students struggling academically. She’s talked to several of her peers on campus, not only spreading the message of Special Olympics but sharing how it changed her life. “My story is motivational, I feel. I honestly couldn’t be more thankful for my experience. At one time, I thought I was a failure. But instead, those struggles just opened up new doors for me to walk through. I’m not a different person because of the Special Olympics, but I have a different attitude and way of looking at life because of it.”