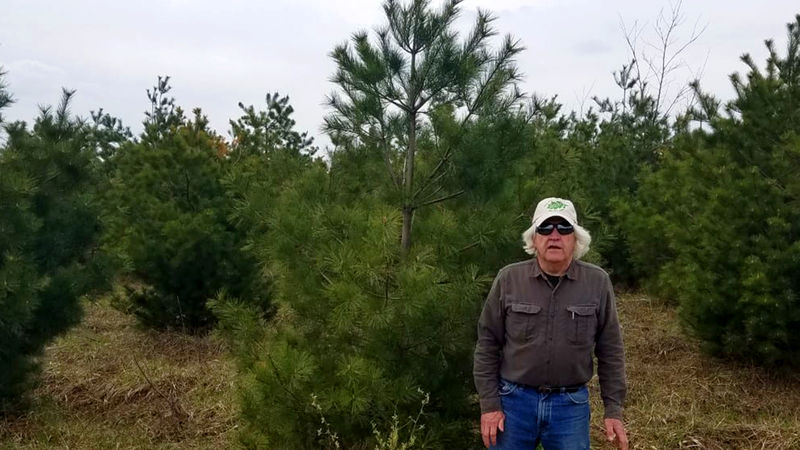 Since its inaugural year, Penn State Altoona students, faculty, staff, and family members have participated in this important reforestation project.
By: Therese Boyd 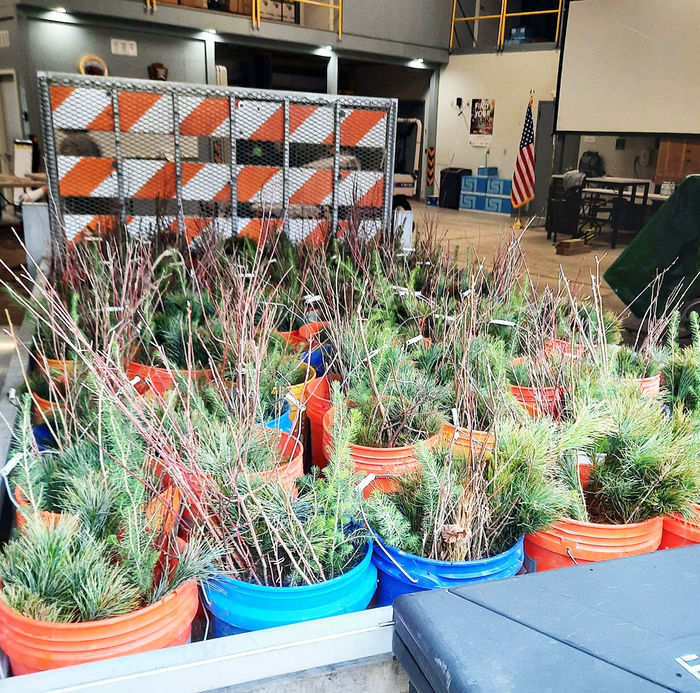 A trailer full of buckets of seedlings ready for planting

Every spring for the last decade people have gathered at the Flight 93 National Memorial site to “Plant a Tree at Flight 93.” And from the inaugural year, Penn State Altoona faculty, staff, students, and family members have participated (original story here), whether it was stuffing a bucket with seedlings in preparation for planting or wielding a dibble bar and learning not to j-hook roots when planting.

“Reforestation is part of the memorial’s original design and is meant to reclaim the former surface mine with native trees,” according to the Flight 93 Memorial Facebook page. To complete that design, this year “tree by tree volunteers planted 14,600 native seedlings ... to heal the memorial landscape. Since 2012, nearly 5,000 volunteers have planted 41 species of native tree seedlings across over 200 acres at Flight 93 National Memorial.” The original goal was 150,000 seedlings and with the last planting, that goal was exceeded. 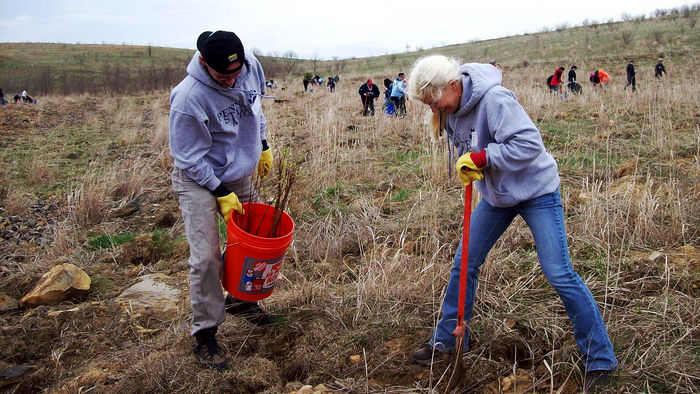 When it comes to the planning and execution of the Plant a Tree at Flight 93 events, Scott Eggerud, OSMRE Team Leader for the Appalachian Regional Reforestation Initiative, a coalition dedicated to reforesting old mine sites, has been “instrumental in pulling it all together,” says Joe Pizarchik, Penn State Altoona alumnus and former director of the Office of Surface Mining Reclamation and Enforcement (OSMRE). With Eggerud’s experience with the principles of the Forestry Reclamation Approach (FRA), “he was able to apply the scientifically proven reforestation techniques. With his expertise, he could help facilitate all aspects, from getting seedlings, to organizing volunteers and reaching out to donors. Scott really brought the model to the Park Service.” 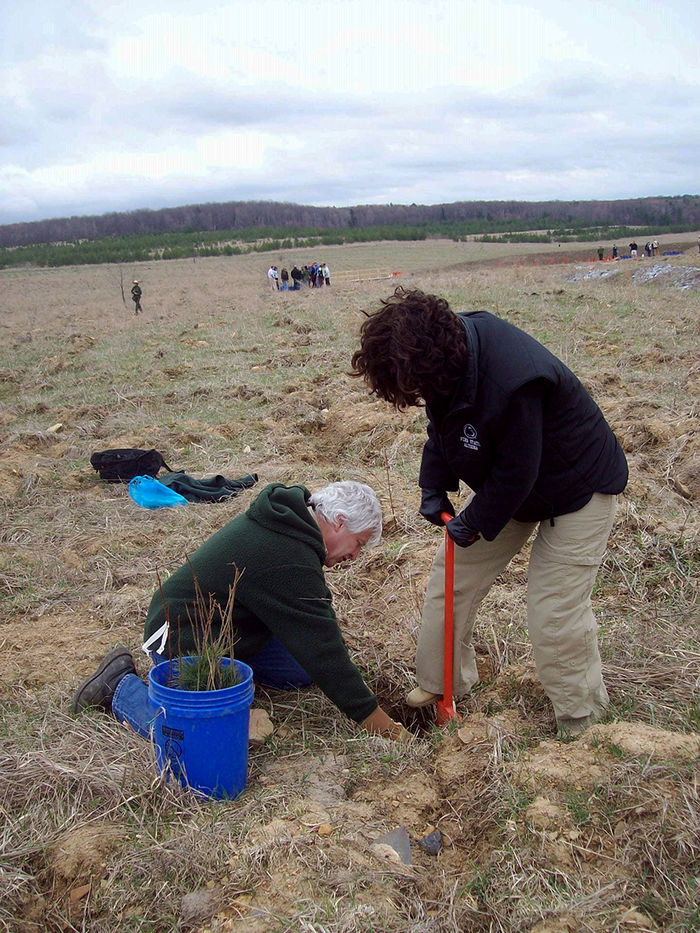 And on bucket stuffing day Eggerud led the group by directing the sequence for handling the seedlings—“Next we’ll do sourwood!”—and the number—“We need two of each!” as volunteers cheerfully followed his orders. Seedlings were unrolled from their paper wrappings, then separated and counted per the instructions. After dipping roots in a rooting treatment, workers placed the seedlings in mulch-layered buckets so that each bucket had the same number and assortment of trees. Making sure the roots weren’t tangled was important because when the planters reach into a bucket, they shouldn’t have to spend time separating seedlings before planting; that extra time would expose the roots to air and dry them out.

Helping to create the Flight 93 National Memorial is a moving and memorable experience, witnessed by the number of volunteers who have contributed in so many ways. Pizarchik, an avid proponent of reforestation who has participated nearly every year in stuffing buckets and planting trees, says, “Professors and students of Penn State Altoona helped make the Flight 93 National Memorial a reality from the first to the last Plant a Tree at Flight 93. Being able to have a part in building a national memorial is a rare experience. Their personal contributions helped build more than 200 acres of the living portion of the Memorial—native forest.” 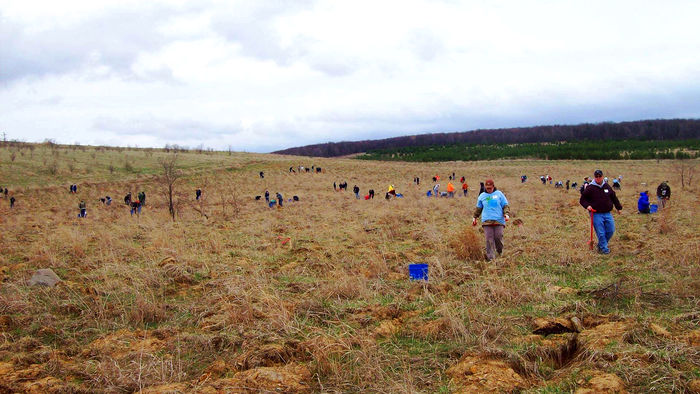 The first year of planting

The change to the landscape is significant: what had been fields of brush and weeds are now populated with burgeoning evergreens and hardwoods—from oak and American chestnut to white pine and dogwood. In fact, Pizarchik says, “The Flight 93 National Memorial has the greatest quantity and concentration of American chestnut in North America.” A personal connection develops for those who work to restore the landscape: Students who planted in the first year even took GPS coordinates of their plantings so they could come back and check on “their” trees.

That personal connection flows through everyone who contributed. In closing remarks on the final day of planting, Adam Shaffer, Chief of Interpretation and Education, Flight 93 National Memorial, addressed all the volunteers past and present when he said: “You are part of the ‘family’ of Flight 93 National Memorial. Please remember your involvement with this project and know that it makes a difference every day. Your work here will echo for generations.” 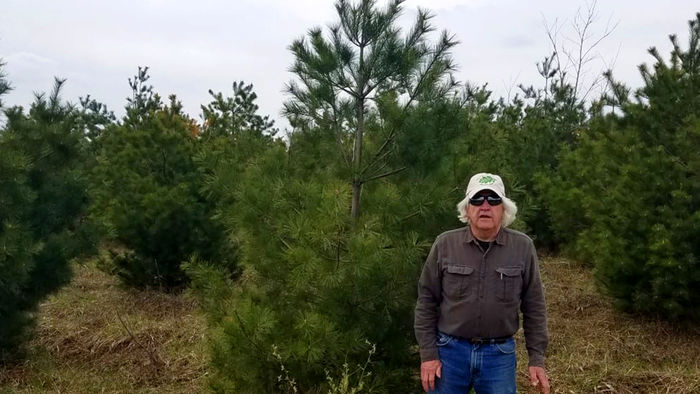 Joe Pizarchik in 2021 standing among trees planted the first year.