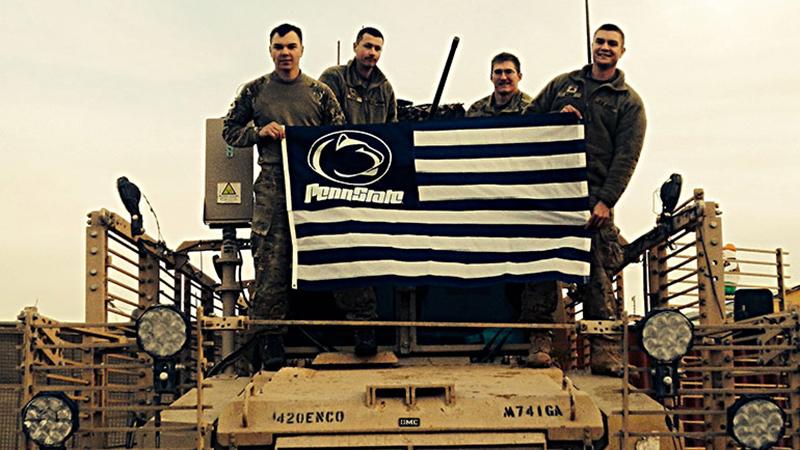 Christian Cieslak, Shaun Aiken, and Josh Keele don’t quite fit the mold for typical fraternity brothers. The three are veterans and older than the traditional college-age students. They have a different mind-set and different priorities than many of their peers. They have formed a strong bond among themselves as brothers-in-war, but they wanted to extend that special camaraderie during their collegiate careers to others like themselves.

All three young men were on deployment together about a year ago. Upon their return, they had the chance to speak with Carl Chindblom, University Park’s chapter president of Omega Delta Sigma, the national veteran’s fraternity. The conversation sparked their interest, and they agreed that a chapter was needed at Penn State Altoona. “There’s no real organization for vets on campus as far as a support network,” says Cieslak, a junior from Washington, D.C. “Coming back from military lifestyle and going into civilian life, especially one that includes college, can be really tough, and there just isn’t much support for these men and women. We want to change that.” So a core group of seven veterans began the process of getting the fraternity recognized on campus. They sent in an application to the national chapter, based out of State College, and after gaining approval there, sought permission from Altoona’s Office of Student Life and from the college’s Greek council. As founders, the group spent the fall 2013 semester learning the regulations and rules, doctrines and constitutions of Greek life, paying dues, and proving they were serious about creating and maintaining a chapter. Altoona’s Omega Delta Sigma remains in Colonization Status, meaning the foundation of the fraternity is still being built but co-ed recruits can now be accepted, including those serving in the National Guard or Reserves.

There are five new members pledging for the spring 2014 semester. “There are a lot more veterans on campus we’d like to reach out to,” states senior Keele. “We are pleased with what we have, but we’d like to see more. We definitely need the numbers to keep the organization afloat.” Cieslak agrees. “We need people who can carry this on. I’m graduating next spring, Josh graduates this semester, and Shaun is transferring. That doesn’t leave many to keep this going, and it needs to.” Cieslak, Aiken, and Keele are spread pretty thin with school work, the reserves, and serving multiple positions in the fraternity while it is in its infancy. “I know it will struggle now. We’re new to it, too, so we are still laying the foundation, but we have to keep pushing,” says Keele.

Founded in 1999, Omega Delta Sigma is quite young as a whole and doesn’t have many chapters across the nation. The Penn State Altoona chapter is only the second one to exist in all of Pennsylvania, although Penn State Lehigh Valley is currently in the process of creating one. As the fraternity grows, Cieslak, Aiken, and Keele plan to create events promoting veteran awareness and to do fundraising for the Wounded Warrior project and other veteran charities. They’d like to establish a space on campus to call their own and offer meetings during a convenient time such as Common Hour. Cieslak states, “I can’t say we’d be the face of all veterans on campus, but we’d like to be at least a nice point of contact for the vets on campus to help them with whatever they need.”

“We all deployed together, so I came back knowing I’d have a support group,” adds Keele. “We want that for other people coming back from duty and going to college for the first time. Most of them are older, and all they’ve known for six or seven years is the military. We want to be here for someone who comes in from active duty or off of deployment for support, even if it’s just something small like getting paperwork for the GI bill started.” Aiken points out that some vets may face certain issues or problems, but could be uncomfortable talking to civilians about them. “It may be easier to talk to someone who has experienced the same issues or knows what a deployment’s like, people who have been through the same thing.”

There are perks to being a member, such as taking part in events only open to the fraternity. But even if a veteran chooses not to pledge, he or she can still use the fraternity as a resource or just a place to go and talk and feel understood.

Cieslak, Aiken, and Keele are proud of their work thus far but know they will be even more so down the road when they can look back and see how far the fraternity has come. “I would love to see it become a full-fledged, accredited chapter with twenty or more members really getting out there and helping vets. I want to help put a good name on veterans, and I want people to see us giving back to the community and helping each other out,” says Cieslak.

“In about ten years when I can see that it’s doing what we wanted it to, when it’s stood the test of time and still exists, then I’ll be even happier,” says Aiken. “It will be awesome to know we started something here and built something that lasted.”