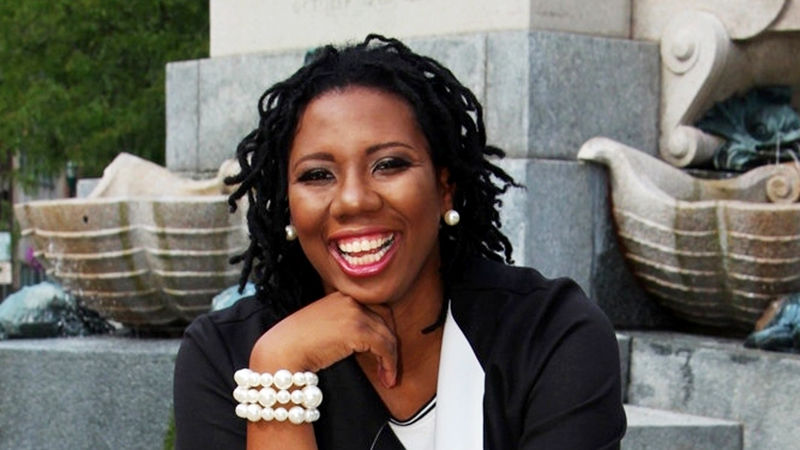 From Newark to Altoona to Indianapolis to Syracuse: as Juhanna Rogers moved through each of these cities, she collected the skills and experience to turn her passions into a thriving career and fulfilling life.

Rogers says her hometown of Newark, New Jersey, was her cultural foundation. It’s where she learned to celebrate African and Black American culture, the place that shaped her commitment to social justice, education, and the arts.

That commitment led her to Penn State Altoona in 2000. Upon arrival, Rogers found herself in a different world: Newark, a bustling, vibrant hub of activity and diversity; Penn State Altoona, a predominately white college in a predominately white rural area. But she jumped right in, building a community of students, faculty, and staff of all races. She became a resident assistant, president of the Black Student Union, and got involved in the dance program.

These shows began gaining popularity throughout campus and Blair County. Some even sold out.

At the end of her sophomore year, Rogers was invited to attend the local NAACP’s annual Freedom Fund Dinner. When her name was announced as recipient of the Woman of the Year award, she was stunned. “At first, I didn’t realize they were talking about me. I was barely 20 years old and receiving that award. It was crazy, but it really affirmed for me the power of performance and the work I was doing.”

Bolstered by the recognition, Rogers continued to write. During a semester abroad in Spain, she wrote a full-length play for her senior integrative arts project. When she returned to Penn State Altoona, she took a class that included set building. She held auditions and organized a tech crew. By the time of its run the month before Rogers’ graduation, it had nearly 70 students, faculty, and staff involved and had three almost sold-out performances. Rogers remembers it as a magical time in her life.

When graduation came around in 2004, Rogers considered her next step. “I thought that what I accomplished as a college student transformed the community and the student body. So, I kept saying to myself, ‘Juhanna, you're called to do something more.’” 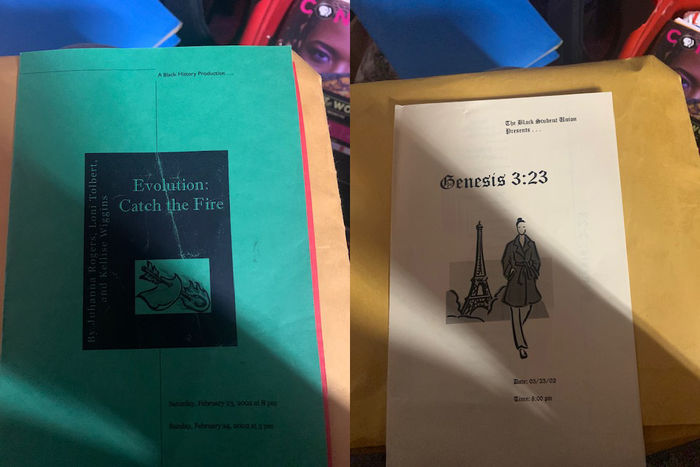 With that firm belief and confidence, Rogers decided to go on to graduate school. She was accepted to Indiana University to study higher education and student affairs, her passion for supporting students of color was her commitment. “I thought about what folks at Penn State Altoona did very intentionally to open space for us to celebrate who we are. I knew I wanted to be that person on a campus for students who look like me and need support and mentorship."

Once again, Rogers packed up and moved to a new state where she knew no one. She again found herself socially and culturally isolated as one of just a few women of color in the graduate program. She resorted to the skills she learned in Altoona for fostering relationships and leaned into her love of movement and storytelling by getting involved in the university’s dance program. She also performed theatrical pieces at the Madam Walker Legacy Center.

Rogers drew upon those same skills after she earned her master’s and stayed on at the university as an adjunct instructor for the Department of Africana Studies. In addition to teaching, she developed study abroad and international exchange programs, recruited and increased African American and Latino student enrollment, helped develop online courses exploring African and African American Diaspora through education and popular culture, and designed and facilitated service projects and workshops.

Having learned what it takes to develop programming that supports the retention of Black and Brown students on campus and in the communities around them, Rogers pressed on, enrolling in Indiana University a second time to pursue a Ph.D. in educational leadership and policy studies. Her research focused on critical race theory, racism in education, and the international experiences of Black students and scholars.

When she graduated in 2016, she and seven of her colleagues were dubbed The Great8, the largest number of Black women to complete doctorate degree requirements in the university’s School of Education simultaneously.

The Great8 were selected as Ebony magazine’s Power 100 Honorees for being change makers in education. “I was humbled because again, like the Woman of the Year award, it wasn't something I applied for, but it was something out of the blood, sweat, and tears of doing my work, our work, that the community considered worthy. And that meant everything because what I was committed to doing was on behalf of the community.”

Following graduation, Rogers traveled the world exploring how underrepresented populations, specifically people of African descent, could improve their lives and communities. Utilizing those experiences, she served as director of Health Programs for Syracuse Model Neighborhood Facility, Inc. She then took a job as director of community engagement and empowerment for Center City CEO, a business leadership organization and chamber of commerce also in Syracuse.

After two years in that position, Rogers became vice president for racial equity and social impact at the company, where she creates inclusive spaces for all members of the community to live and thrive.

“I sit at the leadership table with many business leaders from across the country, and I challenge them to think differently about how they're fostering more inclusive spaces. I push on the boundaries and normalcies that exist when it comes to social justice. I let them know it’s time to put theory into action.”

As always, Rogers is using that philosophy in all aspects of her life, especially the arts.

Rogers considers it her personal mission to encourage women of color to live out loud and unapologetically walk into who they are. She has become passionate about bringing narratives out of the women she has met along her own journey.

In 2019, she became the creator, executive producer, and host of Behind the Woman in partnership with WCNY/PBS. The YouTube series features personal stories from diverse women leaders that inspire and empower other woman to pursue their goals and dreams.

“This is about showcasing some of the brilliant Black and Brown women in the area who have things to say. We are more than just our titles. We experience things and feel things. There is something powerful when humans can sit down and hear someone’s lived experience in a way that is thoughtful and intentional. Regardless of race, color, and gender, we can see the human connectedness.”

The third season will begin in October 2022. 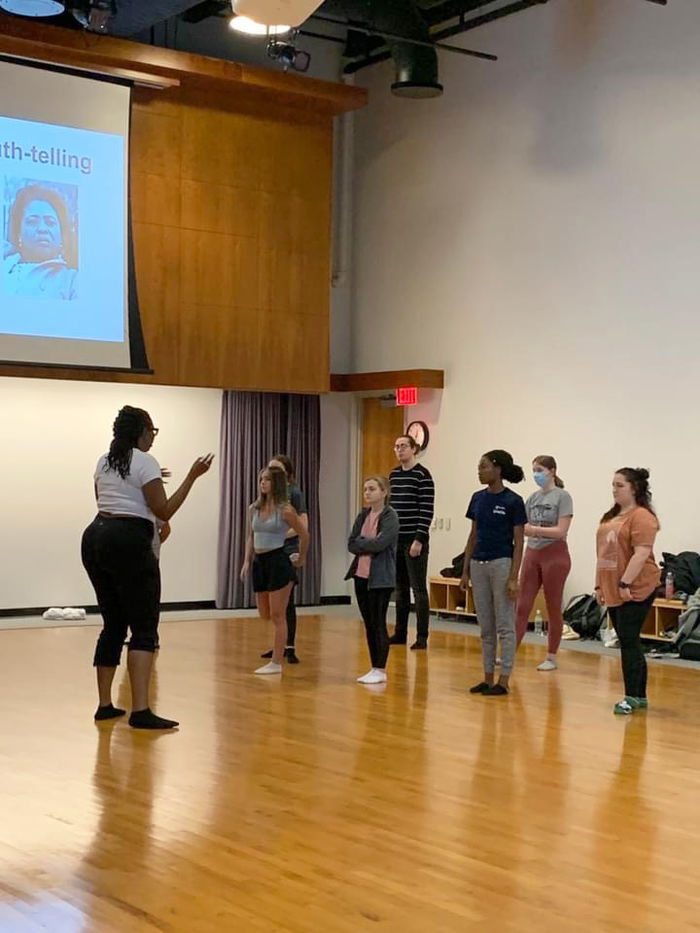 Rogers’ extensive research on racialized experiences of Black students and faculty plays an enormous role in her writing and playwriting.

She is a contributing writer for various blogs offering commentary on higher education and the Black woman’s experience. Her poetry has been published in the anthology Divine Feminist. Several of her theatre pieces, including A Gatherin’ Place and For Harriet, have been produced and performed on stage.

This summer, held over the Juneteenth weekend, was the inaugural Queendom’s Art Festival in Cazenovia, New York. Conceptualized by Rogers, the event celebrated Black excellence in the arts with performances and other entertainment. The festival also featured readings from Rogers’ new work, Queendom, an in-process interactive experience that explores the dream and possibility of reparations.

“Juhanna is a collector—a collector of experiences and people,” states Huckabee, who attended the festival. “Her tribe keeps getting larger. She is always exploring, learning, teaching, and creating, and always with a clear message to be shared.”

Rogers isn’t even close to being done with what she can and wants to do. She can see herself teaching in arts programs and doing speaking engagements on a larger scale, expanding Behind the Woman, and traveling the world sharing her work. She only half jokes about being the next Oprah. And she dreams of her theatre work running on Broadway and going on tour.

With her ambition, nothing seems unattainable for Rogers.

“It's crazy. It is so crazy. None of this was an orchestrated plan, it all evolved. I just kept making choices that felt right to me, and here I am. I think that speaks to the importance and significance in building the confidence to choose the work you want to do. Just keep choosing you.”