RJ Barnard reflects on his journey with Penn State Altoona's baseball program, first as a player, and now as head coach.
By: Conner Gilbert

The Then & Now Series is part of the Allegheny Mountain Collegiate Conference’s 25th anniversary, where the conference will be recognizing current AMCC coaches and/or athletic administrators who are former AMCC student-athletes. The Then & Now Series will run every Tuesday throughout the academic year.

Penn State Altoona baseball head coach RJ Barnard has seen his journey with the Lions baseball program and the Allegheny Mountain Collegiate Conference come full circle. Barnard was a four-year infield starter for the Lions during his career, which lasted from 2006-09. Seven years after the conclusion of his college playing days, he was named Penn State Altoona’s head coach. 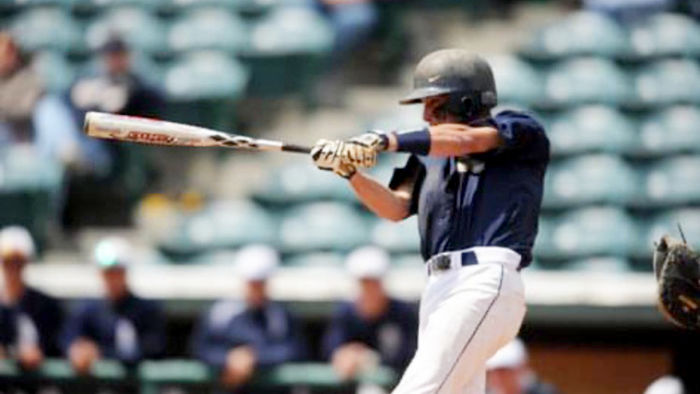 As a player, Barnard was a member of the Penn State Altoona baseball team that produced one of the most successful seasons in the school’s NCAA Division III history. During his senior season in 2009, the Lions won a program-record 32 games en route to claiming the Eastern College Athletic Conference Division III South Region title.

Barnard’s individual statistical accomplishments from his playing career have stood the test of time within the Penn State Altoona baseball program. His name appears 15 times in the Lions’ all-time record books, including ranking second in program history in games played, games started, runs scored, and stolen bases, as well as third all-time in hits.

“Being able to get a world-class degree and have the opportunity to play the sport I loved for an additional four years was memorable,” said Barnard. “College is the best four years of your life, and the memories and friendships last a lifetime.”

For Barnard, the ECAC regional championship in 2009 and the team’s yearly trip to Florida to compete against teams from around the country are among his favorite memories as a student-athlete.

“The ECAC championship was probably the most memorable thing. It was an unreal way to go out, and I will always remember that game,” he said. “The Florida trip each year also provided a ton of memories. It was a great team bonding trip, an escape from the cold temperatures of the north, and the opportunity to play against schools we otherwise would not have played.”

Now, Barnard gets to experience baseball in the AMCC from the perspective of a head coach. Beginning with the 2017 season, he has helped lead the Lions to an AMCC Tournament berth in four of his five years, with the only exception being the COVID-shortened 2020 campaign.

As a coach, Barnard now channels the same passion he displayed as a player toward leading a Division III, AMCC baseball program with which he has a special connection.

“Coaching at my alma mater is special. I’ve always been a diehard Penn State fan, but Altoona is even more special to me,” he explained. “It’s been great to see the program grow and to keep lasting relationships with current players and alumni. I love Penn State Altoona, especially Athletics. I love coming to work every day, and I’m thankful to have gotten this opportunity.”