Metal-insulator composites, as the name suggests, involve mixing together two materials that have very different electrical conductivity. As Fig. 1 shows, we imagine creating a sample of material by mixing increasing amounts of metal (excellent conductor) with a polymer insulator (poor conductor). If the metal content (p) is relatively small, the overall properties of the sample are that of a poor conductor. At some critical threshold of metal content (pc), the sample very suddenly becomes an excellent conductor because there exists at least one continuous path for current to flow through the sample. Beyond this point, the sample's conductance, s, increases further because new current pathways develop as more metal is added. Fig. 2 shows data showing the dramatic change in conductance at the threshold, pc. We are performing systematic measurements of the current through a sample when a voltage is applied across it. Data for current (I) and voltage (V) will help us characterize the physical and chemical properties of the sample's constituents (such as electrical conductance). The dramatic change in the physical and chemical properties near pc can be exploited for the design of sensitive sensors and transducers.

Computer Simulations of the Percolation Transition in 2D Arrays

Imagine a two-dimensional checkerboard on which we randomly paint boxes black. If the probability of any individual box being painted black is small (say 20%), then the fraction of painted boxes on the entire checkerboard (p) will be about 0.05 (Fig. 1). If we repeat this process and increase the probability of painting any individual box black, then we notice that clusters of adjacent boxes begin to develop (Fig. 2). Eventually, we note (in Fig. 3) that the size of clusters is growing and in fact, one of the clusters nearly spans the checkerboard. Finally (in Fig. 4), near a critical value of black squares (pc) when p = pc = 0.5, the largest cluster forms a continuous path across the checkerboard. This transition from no continuous path to at least one continuous path is called a "percolation transition." If our checkerboard represents a real sample with conducting (black) and insulating (white) particles, then the sample becomes a good conductor once the largest cluster (called the backbone) spans the entire sample.

We use Mathematica to simulate various two dimensional arrays with many more squares (up to millions) to investigate how the clusters grow with increasing values of p. These simulations may allow us to model real physical samples and help us understand the mechanisms by which real material properties change near pc. Moreover, the simulations allow us to change the shape of the checkerboard from rectangular (shown) to triangular or hexagonal. Such other geometries may be more applicable to real systems, which are the main emphasis of our investigation into the electrical, thermodynamic, and elastic properties of novel materials. 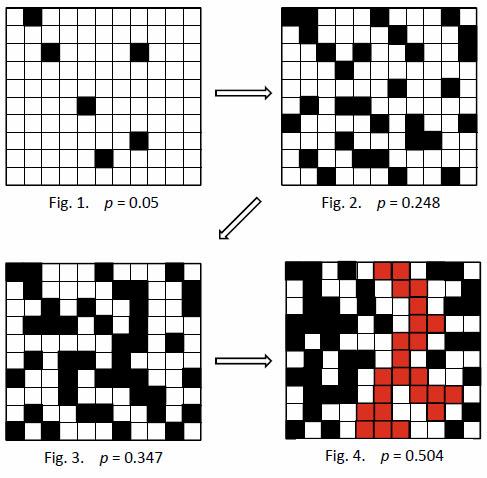 In this project, we investigate the effect of boron doping on the optical properties of graphite, graphene and SWCNT. The research involves two steps. The first involves chemical treatment, whereas the second involves measurement of optical properties. In step one, a wet chemical-processing technique is used to exfoliate the graphite into graphene and also to substitute some of the carbon atoms in the structures with boron. The doped sample is annealed to remove any residue of the processing chemicals. Samples of different boron concentrations would be prepared using this wet chemistry approach. Raman and absorption spectroscopy will be used to investigate systematically the influence of different levels of boron doping on the optical properties of the carbon structures. Changes in the radial band of the SWCNT, the first and the second order bands of graphite, graphene and SWCNT would be used to evaluate the effect of boron doping. 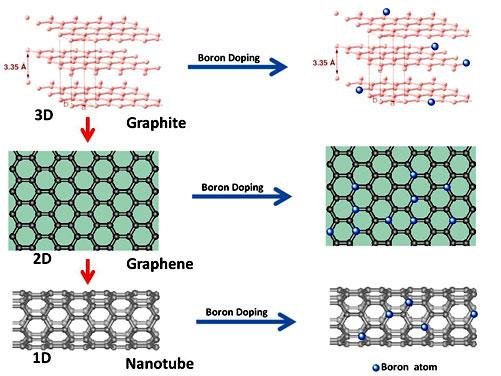 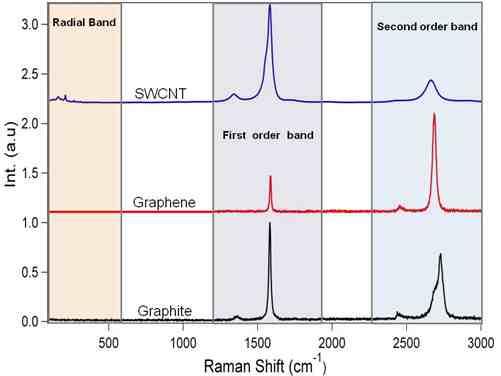 Surface plasmons are trapped light waves that propagate along the surface of a metal conductor. The process arises when free electrons on the metal surface oscillate collectively in resonance with the incident light wave. The phenomenon requires two media with dielectric constant of opposite signs, for example, a conductor (negative dielectric constant) and an insulator (positive dielectric constant). The interaction between the surface charge on the metal and the electromagnetic field of the incident light concentrate the light on the metal's surface, leading to electric-field enhancement. The response of the surface charge of the metal to the incident light is influenced by the size and shape of the metal, the magnetic nature of the metal, arrangement (random or aligned) of the metal's particles in the insulator and preparation method (with or without magnetic field). These factors provide a parameter space to tune the optical response of a metal-filled insulator composite.

In order to investigate the optical response of our elastomer-metal composites, we vary three variables: the size of the metal particles, the type of metal, and the magnetic field intensity. The measurements use ultra violet visible-near infrared (UV/vis/NIR) absorption spectroscopy.