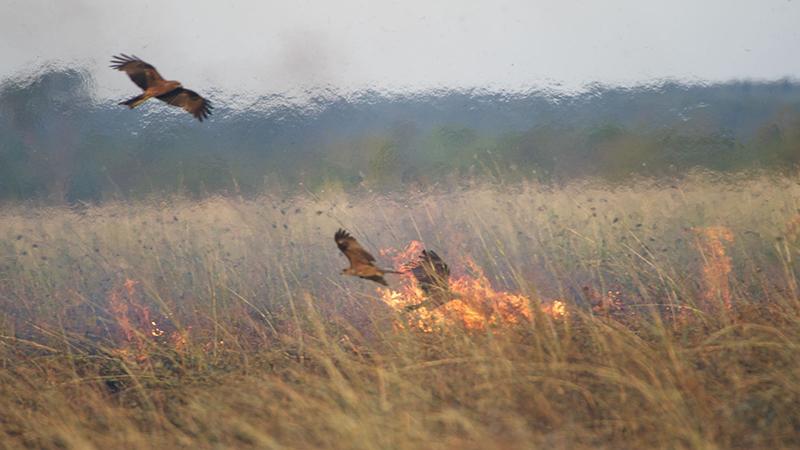 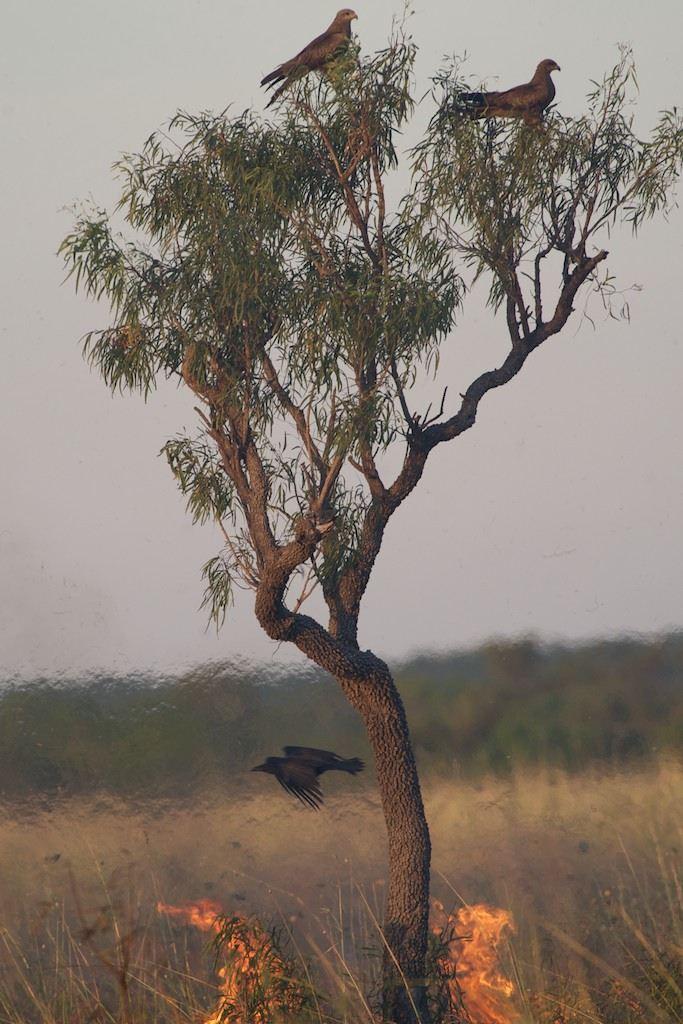 Birds in a tree above a fire, Borroloola, Northern Territory, Australia, 2014.

“This is not a new discovery,” says Mark Bonta, assistant teaching professor of earth sciences at Penn State Altoona, when asked about the firehawks. But it is significant. Only relatively recently have Westerners came to understand what Aboriginal people have known for tens of thousands of years: some species of birds in the Northern Territory of Australia, collectively referred to as “firehawks,” may be spreading fires intentionally in order to make food collection easier. They carry sticks already burning from a wildfire and drop them in another area, which sets a new fire; as small mammals and insects race to escape the flames and smoke, they become easy pickings for the raptors.

A new article in the Journal of Ethnobiology by Bonta, Robert Gosford, Dick Eussen, Nathan Ferguson, Erana Loveless, and Maxwell Witwer, discusses the evidence in support of firehawks, as does an article just published in the New York Times. A lot of skepticism exists about whether the birds use fire as a tool. “In the Western mind fire is the one thing animals don’t have. Fire is what made us human,” Bonta says. “We take for granted ignition and the ability to burn. There’s a lot to be said for what fire did for us—incredible weapons, firearms, being able to set fires. Fire is what gave us power over other animals.” (For more on fires see Stephen J. Pyne, a leading authority on fire, give a TED Talk on “How Fire Shapes Everything”).

Although the focus is on northern Australia, fire-setting behaviors among birds may not be limited by species or geography. The birds known as firehawks include the Black Kite, Whistling Kite, and Brown Falcon; Black Kites are also found in Asia and Africa. Bonta notes some “old reports from Texas and Florida” about caracaras setting fires as well. 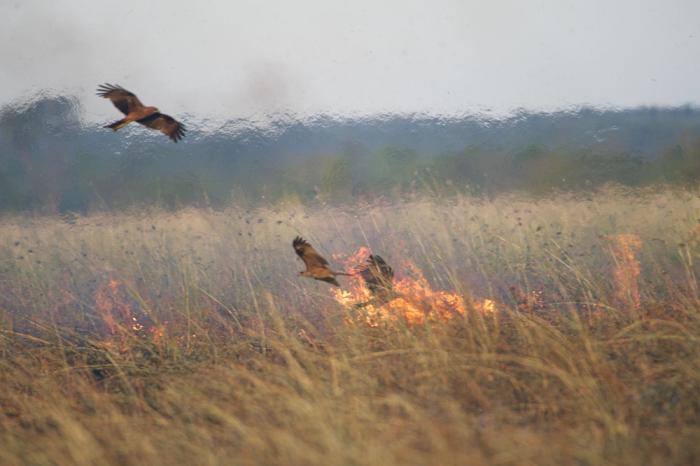 Part of the reason Westerners may have trouble accepting the concept of firehawks, Bonta suggests, is our lack of connection to our environment: “Westerners have done little but isolate ourselves from nature,” he says. Yet those who make a point of connecting with our earth in some form—he uses turkey hunters as an example—“have enormous knowledges because they interact with a species. When you get into conservation [that knowledge] is even more important.” Aborginal people “don’t see themselves as superior to or separated from animals. They are walking storehouses of knowledge.”

But empirical evidence is in the eye of the beholder. While Aboriginal people have known about firehawks for a very long time, there is not yet video evidence to “prove” it to Western scientists. Bonta hopes new attention to the subject will “stimulate other people to go out into the field and study this. This should inspire.” Maybe even light a fire? 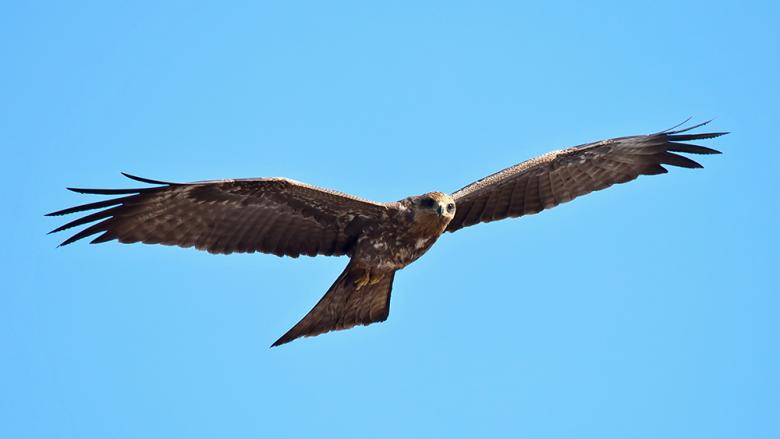 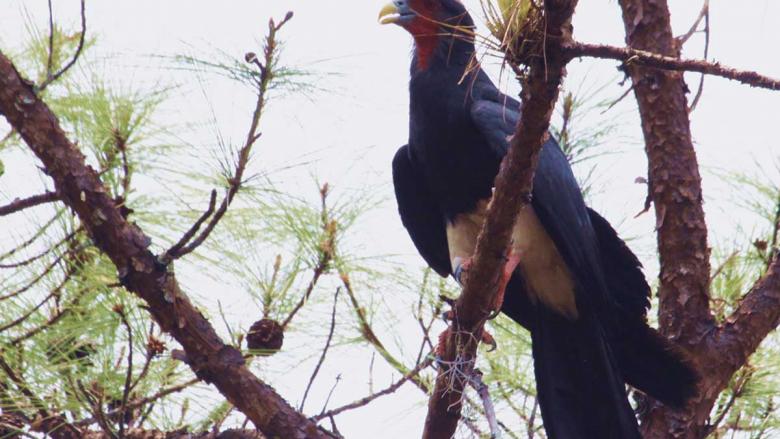 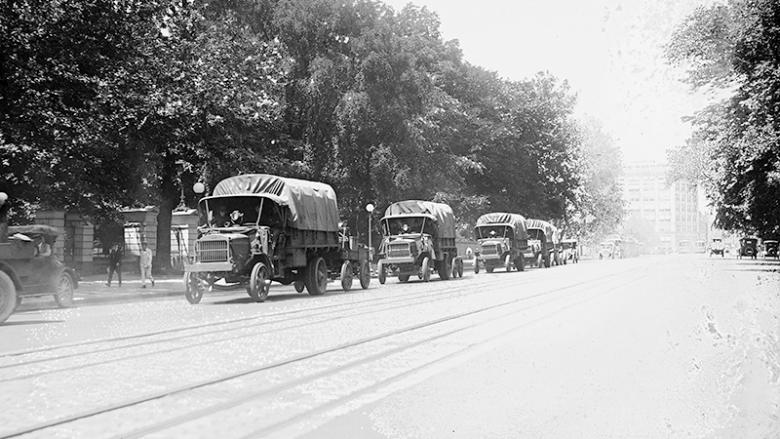