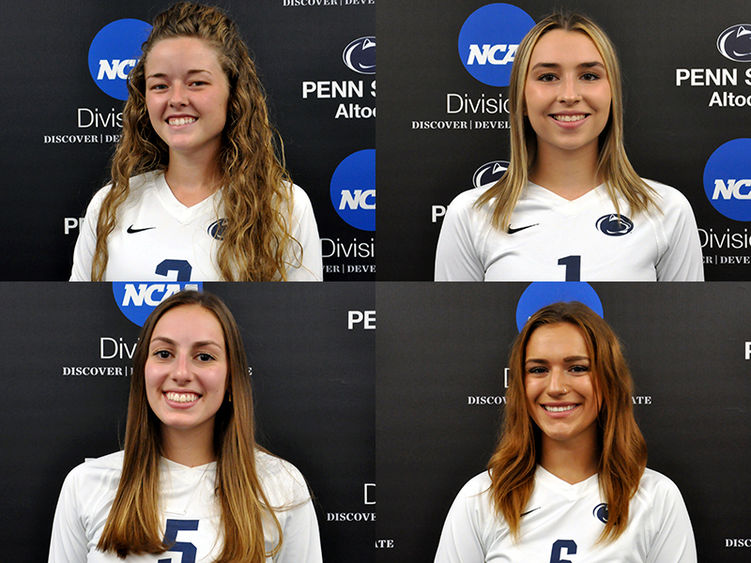 Mock makes her second career appearance on an All-AMCC team after she was a second-team selection in 2019 when she was also voted the conference’s Newcomer of the Year. Barnhart, Lutz, and Moran are all first-time AMCC All-Conference picks.

Mock played in 19 of Penn State Altoona’s 21 matches this season and proved to be one of the top outside hitters in the conference while also displaying strong defense. Offensively, Mock ranked third in the AMCC in kills per set (3.21), fourth in total kills (202) and points per set (3.6), seventh in total points (224.5), and 16th in hitting percentage (.181). On defense, the junior finished 11th in the conference in digs per set (3.22) and 12th in total digs (203). Mock was also named to the AMCC All-Tournament team for her performance in the conference postseason tournament.

Barnhart appeared in 18 matches for the Lions this fall, which was her first regular-season of collegiate volleyball. She emerged as a top outside hitter while balancing her game with solid defense. Barnhart finished the season fifth in the AMCC in kills per set (2.85), sixth in points per set (3.3), ninth in total kills (171), 11th in total points (198.0), 24th in hitting percentage (.146), and 25th in service aces (21) and aces per set (0.35). She also ranked ninth in the conference in digs (3.25) and 14th in total digs (195). Barnhart was named the AMCC’s Offensive Player of the Week on October 4.

Lutz played in all 21 matches this season, her first with the Penn State Altoona women’s volleyball program after transferring to campus. The junior anchored a Lions’ defense that led the AMCC in digs per set this season (17.67), with Lutz herself ranking second in the conference in digs per set (4.86) and third in total digs (340). She was twice named the AMCC’s Defensive Player of the Week during the season, receiving the award on October 18 and November 1. Additionally, Lutz was recognized as the Eastern College Athletic Conference’s Division III South Region Defensive Player of the Month for October.

Moran played in all 21 matches in her junior campaign with Penn State Altoona and quarterbacked a Lions offense that led the AMCC in kills per set (11.89). In the conference this season, the junior ranked second in assists per set (8.92) while finishing third in total assists (651). Moran’s serve was also a weapon for Penn State Altoona, as she finished seventh in the AMCC in service aces (34) and 11th in aces per set (0.47), and she displayed strong defense by ranking 16th in the conference in total digs (179) and 22nd in digs per set (2.45). Moran was named the AMCC’s Offensive Player of the Week on September 20, and she also received ECAC Division III South Region Offensive Player of the Month honors for September.

Penn State Altoona women’s volleyball went 16-5 overall this season, including a 6-2 mark in the AMCC that placed the team third in the conference’s regular-season standings. The Lions earned a berth into the AMCC Tournament and reached the semifinal round.