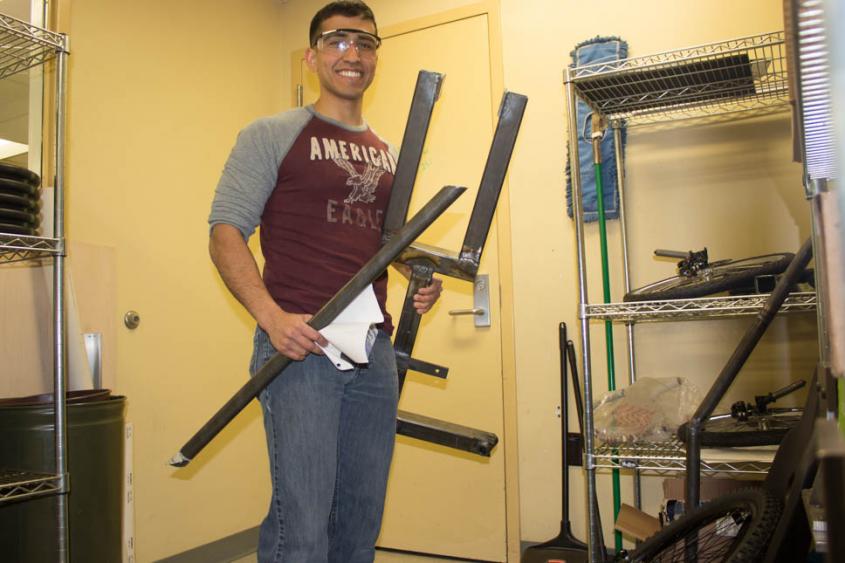 UNIVERSITY PARK, Pa. - A few pieces of metal, a seat, and three bicycle wheels sit idly on a storage rack in the Learning Factory at Penn State. It doesn’t look like much now, but at the upcoming E-Fest, these pieces will be fused together into a human-powered vehicle that flies down the road outside the Bryce Jordan Center.

At the American Society of Mechanical Engineer’s (ASME) E-Fest to be held April 13-15, this bike will compete in a challenge that pits the students against their counterparts from across the region.

James Smith, a senior in mechanical engineering at Penn State, heads up the University's team. Their creation, nicknamed “White Out,” will be outfitted in Penn State’s colors and will showcase the ingenuity of its students. “We’re going to make it look Penn State proud!” he said.

The product of months of research, design, development, and manufacturing, the team, comprised of all seniors majoring in mechanical engineering, is excited to compete in the Human-Powered Vehicle Challenge (HPVC).

“Once we knew that E-Fest was going to be held at Penn State, we wanted to make sure we had a team in every competition,” Smith said. As an active member of the United States Navy, his role is organizing and motivating the team’s efforts. “I really liked getting this team together to accomplish a goal,” he said.

Among others gathering for the annual engineering festival, the team will square off against competitors from Pitt and Grove City College. In addition to bragging rights, they’ll compete for a trophy and cash prize.

The competition provides an opportunity for engineering students to demonstrate the application of the engineering principles they’ve learned to create an efficient, sustainable and fast human-powered vehicle.

Hanna explained his motivation for building the bike as, “creating more sustainable modes of transportation that also combine exercise into the equation is a great way to improve many aspects of society, from reducing environmental impact to improving physical health.”

“Since we only had this semester to design and build it, we are excited to have a functioning vehicle!” Hanna said.

For Zhong, the competition provided a great opportunity for a “hands-on experience working in small groups!”

The bike will be judged on its design, speed, innovations and endurance. Combining safety with mechanics and aerodynamics, the design pushes the students to use their knowledge outside the classroom.

Smith said safety was their primary concern in creating the vehicle. “We used three wheels to maximize the stability and a roll cage to keep the person from being exposed if the vehicle were to turn on its side,” he said. Zhong agreed and said that the team’s roll cage was the most innovative aspect of their design.

Smith added the team was excited to compete, but their primary goal wasn’t to secure the top prize. Being one of the first Penn State teams in this type of competition, they needed to start completely fresh. “We’re mainly striving toward building the knowledge for future competitions,” he said. “And we’re hoping to build the foundation for [teams] in the future.”