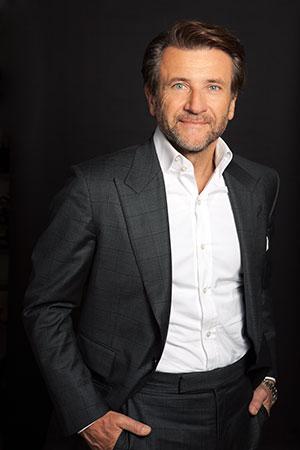 Herjavec is one of North America's most recognizable business leaders. Born in Eastern Europe, he arrived to North America on a boat with his parents after escaping Communism in the former Yugoslavia. From delivering newspapers and waiting tables, to launching a computer company from his basement, his drive to achieve has led him to the fulfillment of a better life for himself and his family. A dynamic entrepreneur, Herjavec has built and sold several IT companies to major players such as AT&T. In 2003 he founded Herjavec Group, and it quickly became one of North America's fastest growing technology companies, scaling from $400K in annual sales revenue to a run rate of $150 million. Today, Herjavec Group is recognized as a global leader in information security specializing in managed security services, compliance, incident response and remediation efforts for enterprise level organizations. His inspiring books, Driven and The Will to Win, were simultaneously Top 10 Bestsellers that earned him the title of "Best Selling Author." Herjavec's motivational business advice has received millions of impressions through TV, print, radio and digital media. He shares his expertise with other entrepreneurs each week as a leading Shark on ABC's Emmy Award-winning hit Shark Tank. Herjavec recently placed sixth with partner Kym Johnson, competing for the mirror ball trophy on the popular show, Dancing With the Stars. For the past four years, he has competed as Ferrari #007 for Herjavec Group Racing in the Ferrari Challenge North America Series, achieving multiple podiums and winning Rookie of The Year in 2011. To Herjavec, running a business is a lot like one of his greatest passions, racing cars. He believes, "You have to stay laser-focused when driving a car over 200 miles an hour, and the same approach is required when growing a business in today's world of rapidly changing technology."

Barbara Corcoran's credits include straight D's in high school and college, and twenty jobs by the time she turned 23. It was her next job that would make her one of the most successful entrepreneurs in the country; she borrowed $1,000 and quit her job as a waitress to start a tiny real estate company in New York City. Over the next twenty-five years, Corcoran would parlay that $1,000 loan into a $5 billion real estate business, building the largest and best-known brand in the business. In 2008, Corcoran was asked by Mark Burnett to be an investor on his new show Shark Tank, which is now in its seventh season and the number one show on Friday night. Corcoran has invested in twenty-five-plus entrepreneurs over the last six years and loves helping each and every one succeed. Corcoran is the author of the best seller Shark Tales: How I turned $1,000 into a Billion Dollar Business. Shark Tales takes you behind the scenes of her life and business, and her "as seen on TV" venture capitalism. Corcoran is famously brash and blunt, bold and courageous, and a brilliant identifier of opportunity and talent that is often invisible to others. Corcoran is a motivational and inspirational speaker and is a frequent Shark Tank contributor on Good Morning America on ABC, as well as a frequent contributor to every major network. Corcoran's new syndicate, Barbara Corcoran Venture Partners, allows would-be angels to invest alongside her on AngelList.

Proceeds from the Speaker Series events benefit the Penn State Altoona Future Fund, which provides funding for programs that enrich academic and cultural life on campus and in the community. This fund also enables the administration to offer emergency scholarship assistance to students experiencing a financial crisis. The Sheetz Family was the title sponsor for the event.