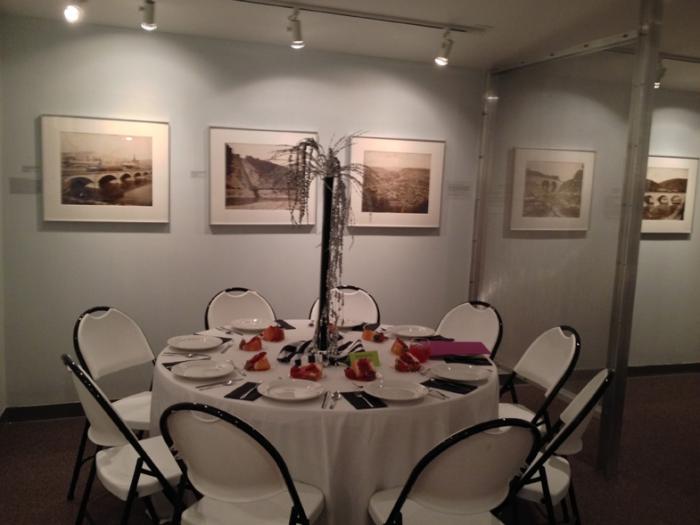 "Thank you for your tremendous assistance for all your efforts to elevate awareness of the Greenway and forge partnerships to create better access to this tremendous, regional asset. I was 'blown away' by Julie's SAMA presentation and could see others also soaking in her words and placing themselves in the photos – what a great way to educate and inspire! We feel fortunate and very grateful for the attention of the Center for Community-Based Studies."
— Jane Shefflield, Executive Director, Allegheny Ridge Corporation
Pittsburgh-to-Harrisburg Main Line Canal Greenway

The Penn State Altoona Division of Arts and Humanities and the Center for Community-Based Studies (CCBS) partnered with the Southern Alleghenies Museum of Art (SAMA) Altoona to curate a bi-annual photographic exhibition of works from the 19th Century Philadelphia photographer William H. Rau. Known primarily as the official photographer of the Pennsylvania Railroad (PRR) in the late 1800s, Rau also served as official photographer for the 1904 Louisiana Purchase Exposition in St. Louis and the 1905 Lewis and Clark Exposition in Portland. He is most widely known for his innovation with albumen printing and the 180-degree panorama of the Horseshoe Curve. The entire Rau-PRR Collection is housed at SAMA Altoona and is owned by the Altoona Area Public Library.

In a first for SAMA-Altoona's Rau exhibitions, Fether researched and wrote a narrative that weaved together the entire set of images selected for display. "The Rise and Fall of the Main Line Canal" illustrated the decline of the Pennsylvania Main Line of Public Works during the Second Industrial Revolution, when transportation—and with it, entire ways of life-- was revolutionized by the steam locomotive and the vast system of railroads being constructed by the PRR. Fether's narrative guided visitors on a metaphorical journey through these simultaneously fading and emerging epochs.

Fether also documented her experience co-curating the exhibition and developed a methodology for working with and exhibiting SAMA's unique Rau Collection. This methodology will guide future students in curating a Rau exhibition.

The Penn State Altoona—SAMA Altoona partnership will continue for the next Rau installation, set for 2017. CCBS will collaborate with faculty in the visual arts and in history to involve students in exhibition curating and in research and development of the installation's thematic narrative.

"The Rise and Fall of the Main Line Canal"
Although the PA Main Line Public Works canal system halted most travel in 1854 there was still active canal travel through sections from community to community - mainly within the Juniata River Division between Harrisburg and Hollidaysburg. It is during this time that the Allegheny Portage Railroad was abandoned and the PRR Horseshoe Curve route took precedence. But Rau loved those canals. Many of the photographs of his "openings" – a 19th Century term used to describe the landscape and landscape photography - began where the Susquehanna and Juniata Rivers merge at Duncan's Island and travel through the hauntingly beautiful Juniata Valley, following the PRR and the dying remnants of the canal. This selection of photographs illustrates the transition of transportation in PA – from evolution to revolution - at a vibrant and turbulent time of industrialization. The loss of the PA canal system was a simple means of "progress" and Rau's photographs poignantly capture the modernization of travel across Pennsylvania as a gateway to the West.