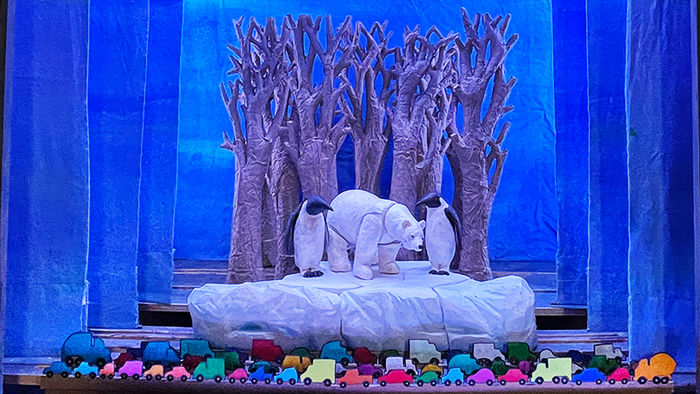 Penn State Altoona will present theLASTree by Laurencio Carlos Ruiz Friday through Sunday, April 16–18 via Zoom. Recorded performances are at 10 a.m. and 7 p.m. April 16 and at 2 p.m. April 17 and 18, each followed by a live talkback with Ruiz in which he will discuss his creative process and answer questions.

theLASTree premiered at Penn State Altoona in 2018 as a full-length show. These spring performances are shortened versions perfect for families to enjoy in their own homes.

theLASTree is a visual spectacle featuring puppets, music, song, and movement about nature and the consequences of deforestation, pollution, and plastic waste. Mother Nature is the storyteller who encourages the audience to engage in three fundamental sustainable practices: refuse (refuse disposable plastics), reuse, and recycle to protect the air, water, land, and ecosystems. The puppets, props, costumes, and stage for these performances are made 100% from recycled materials.

Private streamings with live discussions are available for classes, meetings, or other events. Contact Ruiz at [email protected].

For further information, call the Misciagna Family Center for Performing Arts at 814-949-5452.

theLASTree
A Puppet Tale from Nature about Loss, Hope, and Us

After two years in the making, this toy theatre production was recorded at Penn State Altoona's Misciagna Family Center for Performing Arts on April 13, 2021.

75% of the paper, plastic, textiles, and wood used for this production are made from recycled materials. No puppet has been hurt during this production.

This production is prerecorded and will be followed by a talkback with the artistic creator, director, and puppeteer Laurencio Carlos Ruiz. He will answer any questions about the puppets, stage, mechanics, and any other aspect of the show.

theLASTree was first performed at the Misciagna Family Center for Performing Arts at Penn State Altoona in November 2018.

WARNING: Federal law provides severe civil and criminal penalties for the unauthorized reproduction, distribution, or exhibition of copyrighted motion pictures, audio and videotapes, or audio and videodiscs. Criminal copyright infringement is investigated by the FBI and may constitute a felony with a maximum penalty of up to five years in prison and/or a $250,000 fine.

Dedicated to:
Roselyn and Jordan, the loves of my life

My most recent production, theLASTree, is the culmination of two years of intense work in the making. As a result, this solo-puppeteer show is a mini-version of the original which premiered in fall 2018 with 12 puppeteers. This new toy theatre is a self-contained production intended for a small live audience, which works well under our present reality, or performed in small spaces. Easier to move for travel, it creates more possibilities to circulate the urgent critique the piece offers to the broadest geographic and social audiences. This toy theatre features new puppets and new staging, but the theme remains the same: Mother Nature calling for help to ALL OF US to stop the damage and stop the destruction of our earth’s environment. She is the storyteller who reminds us how essential and fragile life is. If we don’t stop polluting the planet now, the living things we love will be gone forever. She encourages us to do three fundamental sustainable practices—Refuse, Reuse, Recycle, in order to reduce the damage already done to our natural resources: air, water, land, and ecosystems. After all, this is our planet, our home, the only one we have. In this production I assume the clear role of artist, translating scientific knowledge through an original text and visual images, with interdisciplinary puppetry, sound, and music, all performed by one puppeteer.

Puppetry serves as my platform to express my creativity and artistic identity. It consolidates the diverse aspects of my artwork. It has given me a voice, a visibility, an identity. I believe that puppetry transcends culture and language and gets at the essential, our core, our humanity. Just as puppets are used as part of medical healing, they can bridge seemingly insurmountable gaps between people. I am drawn to puppetry’s unique ability to mesmerize and allure an audience in a very distinct way. Even when the narrative of the story is unfamiliar, the puppet’s vitality makes it less threatening. Puppets can generate a safe playground for both the puppeteer and the audience to be more tolerant and open to that which is different, to the eerie, the weird, and the odd. In that way, puppetry allows us explore new, unfamiliar, even uncomfortable realms.

Naomi Hatsfelt Baker (Mother Nature)is an assistant professor of integrative arts and theatre. She has directed numerous productions at Penn State Altoona including Lady Windermere’s Fan, A Year with Frog and Toad, The House Full of Letters, and Reasons to Be Pretty. Prior to her appointment here, she worked as an associate professor of theatre at Wilkes University for eight years and as a voice and speech specialist before that. Here she teaches theatre, integrative arts, and communications classes. Most of Naomi’s professional performance experience was garnered in the Dallas/Fort Worth, Texas, metropolitan area. She also has significant credits in voice-over and industrial videos. She spent three months performing in Hello, Dolly!, directed by Lee Roy Reams, in Paris, and two years working as a singer on Celebrity Cruises. She is a certified Lessac voice trainer and was a member of Actors’ Equity Association from 1993–2015. In 2018, she was the voice of Mother Nature in the large scale production of theLASTree. She has performed in The Next Stage productions of Sense and Sensibility and Voices at the State Theatre in State College and directed a production of Uncle Vanya for the company.

Kevin MacLeod (music) is an American composer and musician. MacLeod has composed over 2,000 pieces of royalty-free music and made them available under a Creative Commons copyright license. His licensing options allow anyone to use his music for free as long as he receives attribution, which has led to his music being used in thousands of films. As of July 2016, MacLeod had over 2,300 composer credits listed on the Internet Movie Database. His music has been used in Hugo, some commercial video games, and videos by online content creators such as College Humor, The Blue Milk Podcast, Hydraulic Press Channel, and Good Mythical Morning.

Joanna Ruhl (sound mixer) worked with Penn State Altoona until 2020 and is a graduate of Indiana Wesleyan University. She worked both onstage and off in educational environments for five years through acting, design, construction, and directing. In Indiana, she stage-managed a variety
of shows, ranging from Shakespeare’s Pericles to Sondheim’s Into the Woods. Previously, Joanna designed the lighting and sound for Penn State Altoona’s production of A House Full of Letters.

Laurencio Carlos Ruiz (director, puppet design and construction, costume design, text/script, puppeteer) is resident scene designer and assistant teaching professor of theatre and integrative arts at Penn State Altoona. He holds an M.F.A. in scenic design from Penn State. He also holds a B.A. in graphic design from the Universidad Autónoma Metropolitana of Mexico where he also studied industrial design and visual arts. His experience as
a multi-disciplinary designer and artist includes sets, costumes, puppets, masks, and props for cabaret, theatre, and television. Since his involvement with puppetry, he has been performing at academic conferences, museums, theatres, and festivals. He has offered multiple puppet-making and puppet- manipulation workshops at universities for art and theatre students. Most recently Ruiz was accepted to The Solo Show Challenge with Jean Marie at The 2021 National Puppetry Conference that will be held in June at the Eugene O’Neil Theatre Center. Ruiz will have access to five exclusive masterclasses as well as the opportunity to engage with puppetry open mics presented by Blue Gene’s Pub through live-stream. The Solo Show Challenge has been created to support artists as they devise original solo puppet works. With the support of experienced mentors, Ruiz will work on the development and performance of a brand-new piece of puppet theatre, The Noble Boneheaded Bull and the Wounded Horse Who Fixed Him
Up, inspired by humanity's history of violence, current events, Picasso’s Guernica, and his hero Jan Svankmajer. This performance will premiere in spring 2022. Ruiz is excited to participate in the conference. Projects completed through this have gone on to become nationally-recognized full- length shows, cabaret acts, pitches for television, classroom performances, and more.

Steven Sherrill (music) has been making trouble with words since 8th grade, when he was suspended from school for two weeks for a story he wrote. He dropped out of school in the 10th grade, ricocheted around the southern United States for years, eventually earning a welding diploma from Mitchell Community College, which circuitously led to an M.F.A. in poetry from the Iowa Writers’ Workshop. Now, Steven is a professor of English and integrative arts at Penn State Altoona. He occasionally captains the Allegheny Bilge Rats Shanty Choir, makes abundant and playfully perverse paintings, and struggles mightily and happily with multiple banjos, several synthesizers, and his two daughters. He has five novels and a book of poems in the world. He has written several articles on contemporary artists for Modern Painters and for TATE Magazine. He is the recipient of a 2002 National Endowment for the Arts Fellowship for Fiction. His first novel, The Minotaur Takes a Cigarette Break, is translated into eight languages and was recently released as an audio book by Neil Gaiman Productions. His second novel, Visits From the Drowned Girl, was published by Random House (and nominated by them for the Pulitzer Prize), in the United States and Canongate. It was released in the United Kingdom in June 2004. The Locktender’s House was released by Random House in spring 2008. In November 2010, CW Books released the poetry collection, Ersatz Anatomy. Louisiana State University Press: Yellow Shoe Fiction Series released the novel JOY, PA, in March 2015. The Minotaur Takes His Own Sweet Time was published in the fall of 2016 and lauded by Alan Gurganus in The New York Times Book Review. There are other books in the works, paintings always underway, much musical silliness, and about 750 vintage wooden crutches in his basement. Much more info can be found at https://stevensherrill.bandcamp.com

A. David Villani (sound design) is recognized by many as one of the top audio professionals in the region. He has been recording and
engineering music for almost three decades and has mixed and edited musical content alongside Grammy Award winners Paul Winter, Mike Reid, and David Gates (Bread). He has composed and scored numerous orchestral commissions, regional jingles, commercial music titles, and has arranged music for orchestras and various other music ensembles. His national television credits include work for the Miss America Pageant and Honda America. A recent project included editing and engineering voice tracks with actor TJ Miller for the popular videogame Call of Duty by Activision. He has studied electronic music with Robert Moog, the legendary pioneer and inventor of the Moog Synthesizer. As a synthesist, he programmed two MIDI books for Technics Corporation published by Hal Leonard Publishing. He has designed sound for numerous local theatre productions as well as performed in pit orchestras as a keyboardist. In addition to teaching audio production, music theory, the history of jazz, and the history of the Beatles, he maintains and manages Data Music Services, a state-of-art commercial audio/video editing facility that is based in Altoona. He was one of the early adopters of non-linear digital technologies and is recognized for his expertise in Pro Tools software. He holds a bachelor of music degree in jazz arranging/composition from Temple University, a master of arts degree in music theory/composition from Indiana University of Pennsylvania, and a D.M.A. (doctorate of music arts) degree in music education from Boston University. He has also studied acoustics at North Carolina University/Ashville and North Texas State University. His dissertation studied the implementation of music software among high school music educators. His research interests focus on the integration of technology in music education.

Upcoming at the Misciagna Family Center for Performing Arts

Found out what our alums have to say about Penn State Altoona's Integrative Arts program!